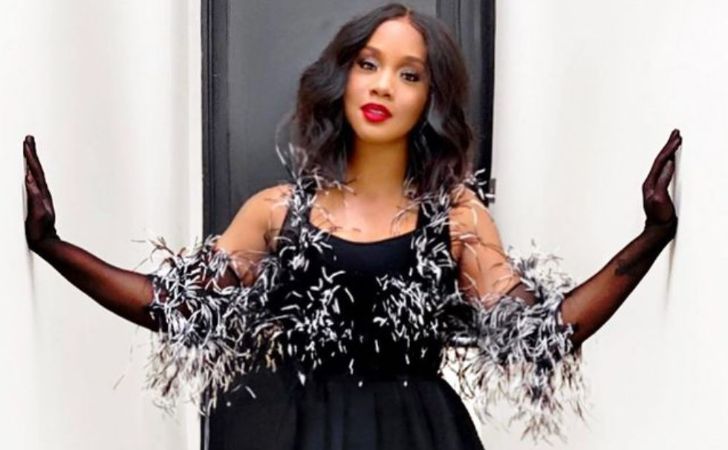 Sarah Jakes Roberts is an American businesswoman, motivational speaker, and the New York Times best-selling author. Further, she has also founded Woman Evolve, a movement led by her. Along with her professional accomplishments, she is also famous as the daughter of American author and filmmaker T. D. Jakes.

While she leads a successful professional life, what about her love life? Well, she is married twice and also has children from her marital relationship. Well, in this article, we are going to talk in detail about her career, marriage, and several other interesting details.

Who Is Sarah Jakes Roberts?

Like we said earlier, Sarah is an author, businesswoman, and pastor. She was born on July 17, 1988, in Texas, United States. Her father’s name is T. D. Jakes, and her mother’s name is Serita Jakes. Both her parents are successful authors and actors.

Sarah attended a local school in Texas and later finished her university education from the Texas Christian University.

She has four siblings, three brothers, and a sister. Her brothers Jermaine Jakes, Jamar Jakes, and sister Cora Jakes Coleman are older than her. She also has a younger brother, Thomas Jakes, Jr., who is 26 years of age in 2021.

Needless to say, she shares a great bonding with all her siblings.

The self-help author Sarah has had her hands in numerous professional fields. She began her career as a receptionist at a commercial company named Aerotek back in February 2007. After quitting her job in November 2007, she joined Big Safari Association as an Office Manager in December, where she worked until November 2008.

In November 2008, she joined TDJE as a Project Manager, working full-time until June 2009. Later from March 2011 to November 2014, she was part of her father’s T.D. Jakes Ministries as Director of Women’s Ministry.

As far as her present is concerned, she is the Co-pastor at The Potter’s House since November 2014. Further, she also founded the Woman Evolve in November 2017. The foundation is dedicated to empowering women and challenging norms and limits set upon women.

She Is Also An Author Of Numerous Books

Apart from all other professional accomplishments, Sarah Jakes Roberts is also an author. She has authored numerous self-help books. She came up with her first book Colliding with Destiny in 2013.

A year later in 2015, she released her third book named Dear Mary: Lessons From the Mother of Jesus for the Modern Mom. Her fifth book Don’t Settle for Safe: Embracing the Uncomfortable to Become Unstoppable released in 2017. Her latest book, Woman Evolve: Break Up with Your Fears and Revolutionize Your Life, came in 2021.

Sarah was just 19 years of age when she walked down the aisle with Robert. Unfortunately, Sarah and Robert’s marriage did not last very long. Almost 4 years into marriage, they divorced in 2012. Regarding her unexpected divorce, she also made a public statement saying,

“After professional counseling and prayerful consideration, I have decided to end my four-year marriage. There are biblical grounds supporting this decision and I have attempted every other recourse but after multiple infractions over the course of the union, and for my personal safety and that of my children, I have come to this painful decision.”

After her divorce from her first husband, Sarah married for the second time to Pastor Touré Roberts. The duo walked down the aisle in November 2014.

She shares a great relationship with her second husband and calls her husband her biggest support. She has stated on numerous occasions about how her husband has been her biggest mentor. She said,

“I have so much respect for who my husband is, how he leads and how he interprets what’s happening in the world.

He’s one of my mentors and working with him gives me direct access to one of the most brilliant men I’ve ever met and then apply them to my company and organizations. I feel like I steal his ideas, but we’re married so it’s fine! It’s all the same thing.”

Sarah Jakes Roberts: She Became a Mother At 14

Sarah Jakes Roberts is a mother of six children, Makenzie Henson, Malachi Jakes, Isaiah Roberts, Ren Taylor Roberts, Ella Roberts, Teya Roberts. To your surprise, she gave birth to her first child when she was just a 14 years old teenager. Unfortunately, she has not revealed the father of her first kid.

Well, the fact that she was pregnant at just 14 created a lot of chaos among the Christians. Her father T.D. Jake who is a Bishop opened up about the fact and stood by his daughter despite all the pressure. While things became normal eventually, Sarah opened up about becoming a young mother years later via an Instagram post.

As an author of several successful books and the owner of a successful business, Jakes definitely makes a decent salary. Her net worth is also estimated to be in millions but unfortunately, her exact net worth is not available so far.

On the other hand, her father T.D. Jakes is pretty huge with $20 million in net worth, as per Celebrity Net Worth.