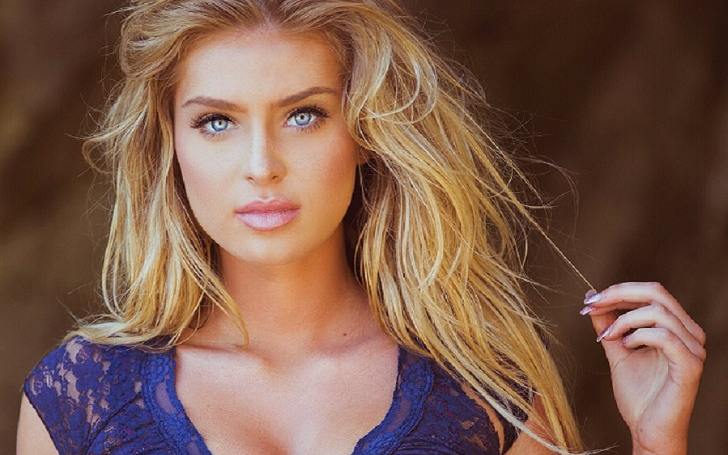 Saxon Sharbino developed a knack for acting ever since the actress made a debut with a minor role in Friday Night Lights at age nine. She gained wide popularity playing Amelia Robbins on the Fox series Touch and Sara Pearson in American Vandal.

Sharbino previously was in a relationship with her now ex-boyfriend Jake Paul, a YouTuber and actor. Who is Saxon’s boyfriend, after her breakup with Jake?

Let’s find out all the interesting facts about Sharbino.

Who is Saxon Sharbino’ boyfriend in 2022?

Saxon is dating a boyfriend Pierson Fodé in 2021. Like her, her beau Pierson has also shared the same love for acting. The power couple has been together since the mid of 2020. Back in early May 2021, Sharbino posted a photo of themselves on the occasion of their one year of togetherness.

“happy anniversary @piersonfode ! ❤️ even after a whole year, you still give me butterflies. I feel so happy we found each other. i admire you. you are strong in every way & i feel so safe with your arms around me,” she wrote in the caption.

But, in the past, Saxon was too confidential when it comes to her love life. Despite having such a considerable fan following on her social media, Sharbino rarely shared photos with any guy. This maked it quite hard to find out further information about her personal stuff.

Who is Saxon Sharbino’ Ex-Boyfriend?

Sharbino briefly once dated American YouTuber and actor Jake Paul. They reportedly went out in 2014. The two first came across when Paul moved to Los Angeles for the first time in early 2014.

Sharbino and her now ex-beau Jake always kept their relationship away from the mainstream. But their romantic love story grabbed huge attention after the YouTuber posted the video titled ‘A Conversation With My Ex-Girlfriend’ on his channel on 21st October 2017.

The video went viral and it has over 10.6 million to date. In the video, both of them reminisced about their relationship and memories. In the same video, the former flames revealed they went on their first date at VidCon and later met each other’s family too.

Furthermore, Saxon and her ex-boyfriend Jake also experienced cliff jumping together. Saxon Said in the video,

Do you remember how you had a calendar…and you wrote all of your goals on it. I remember looking at it like, ‘these are insane but I think he’ll do it!’ And I think you did do it

Here is the full video here!

Meanwhile, the rumors about their reunion also sparked but, they slowly vanished shortly after the video release. As of 2020, Jake is reportedly dating girlfriend Julia Rose, an actress.

Who are Saxon Sharbino Parents?

Saxon Sharbino is the daughter of Ron Sharbino (father) and Angela Sarbino (mother). She was born on June 11, 1999, in Lewisville, Texas.

Is it obvious I was the difficult one?

Sharbino possesses American nationality and belongs to the caucasian ethnicity.

Saxon Has Two Other Actors Siblings

Saxon Sharbino belongs to a family of multi-talented people. She has two younger siblings; a sister Brighton Sharbino, 18, and a brother Sawyer Sharbino, 16. Both of them are active in show business from an early age.

Her sister Brighton started her acting career by the age of six. She made her biggest breakthrough with the role of  Lizzie Samuels on the critically acclaimed AMC TV series, The Walking Dead.

While talking about their little brother Sawyer, he is best known for his work on the Fox series, Touch. He appeared on the show along with her older sister Saxon and many other prominent actors.

Besides, Saxon is a devoted family member who has a very close and intimate connection with her parents. Additionally, the Sharbino siblings also share deep bonds with each other.

School and Acting Hand in Hand

Saxon studied at the Bridlewood Elementary School. She later decided to complete elementary schooling at home because of her busy schedule.

Sharbino also skipped a grade when she was at Downing Middle School. She along with her family moved to Los Angeles, California at the age of 14.

Started Acting At the age of 9

In 2008, Saxon Sharbino appeared on the hit sports drama TV series Friday Night Lights. Similarly, the actress landed her first movie role in a revenge-thriller Red White & Blue (2010). Furthermore, she became part of two other big projects in the same year including Earthing and I Spit on Your Grave.

In 2017, the actress made a big break when she snagged the role of Sara Pearson on the mockumentary web TV series American Vandal. She appeared on the show along with Tyler Alvarez, Griffin Gluck, and more others.

Sharbino has also appeared in many other hit movies and TV shows. She appeared in Law & Order: SVU in 2017. Her other projects in the same year include Freakish and Lucifer.

In 2019, Saxon played Charlotte Bayles in the action movie Beyond the Law.

What is Saxon Sharbino Net Worth?

Saxon has racked quite a good fortune from her work as an actress. Sources suggest that the actress has a net worth of $500,000 as of 2022.