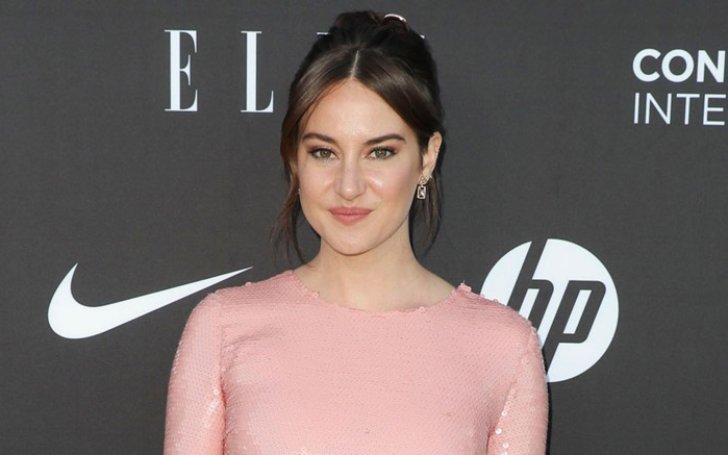 Ever since breaking up with her beau, we’re all curious about Shailene Woodley’ current relationship status. Has she jumped into the dating scene in 2021 or perhaps she has a new love affair in 2021?

She recently broke up with now-ex Ben Volavola but what about Shailene Woodley’s boyfriend in 2021.

Let’s find the answer and along the way, know why she separated from her ex, her sexuality, and her dating history.

Who Is Shailene Woodley’ boyfriend in 2021?

Shailene has always been open about her relationships, unlike other celebrities. And as of 2021, the California native is happily engaged to NFL star Aaron Rodgers. At first, neither of them revealed they were engaged to each other.

Aaron first broke the news of his engagement during his NFL MVP acceptance speech. In the speech, he thanked his secretive fiancee, who later turned out to be Shailene.

But the announcement wasn’t the most shocking part. That honor goes to the fact that both Aaron and Shailene were able to hide their relationship from the public.

The final piece of the puzzle was put in by Shailene when she confirmed the rumors surrounding her engagement with Aaron during an interview with Jimmy Fallon. Take a look!

This will be the second engagement for Woodley while a first for Aaron. Shailene was previously engaged to be married to a rugby player, Ben Volavola. On the other hand, Aaron was most recently in a relationship with NASCAR driver, Danica Patrick. They broke up in 2020.

Shailene once mentioned she wanted to remain single for a while

Although Shailene is now officially engaged, she once decided to not involve herself in a relationship. Her bold decision was somehow influenced by her role in the movie, Endings, Begining.

In an interview with the New York Times, she maintained,

“We’re societally conditioned to assume that one person can be our end-all, be-all. This is a concept I’ve been thinking about often right now, because I’m very much single, and I’ve chosen to be single for a while.”

Hard to believe, Woodley came to this conclusion after starring in the movie wherein she has two love interests, Sebastian Stan and Jamie Dornan. But despite all that, she is now happily betrothed and we couldn’t be happier.

During the tenure of their lovey-dovey, the former flames didn’t make a lot of appearances together, although Shailene used to attend many of his games.

The exes made their debut appearance as a couple at the premiere of Woodley’s movie, Adrift in May 2018.

They first came across one another when Shailene was shooting for the movie, Adrift in Fiji. Incidentally, Ben was also at the location, competing at the international rugby union competition.

That’s how they first came across each other. Moreover, Ben’s family all live in the small island nation.

Despite Talking about Marriage and Kids, Why did Ben and Shailene Broke-up?

The duo looked very much in love and fans were even hoping the couple would walk down the aisle sooner, however, it all ended when Shailene had a change of heart.

Apparently, the 29-year-old had a change of mind and thought she needs to love herself before planning to settle down. She revealed the break-up during an interview with Bustle in April.

Initially, Shailene and Ben talked about getting married and have kids, but, while filming Endings, Beginnings, she had a revelation.

Woodley said, “I realized I was still at an age where I wasn’t able to fully commit. I couldn’t be available to him in the way that I wanted to be. I didn’t fully love myself.”

They called it quits after going out for more than two years.

Shailene Woodley Past Affairs: Had an Abusive Teenage Affair

Before Ben, Shailene was involved in two other confirmed affairs. She was linked with her Divergent co-star, Theo James. Their chemistry on-screen led fans to believe the pair was most probably dating off-screen as well.

The pair never confirmed nor denied their romance rumors.

In addition, Shailene reportedly dated Indie rocker, Nahko Bear. In 2014, the rumored lovebirds were spotted getting affectionate at Hamakua Coast of the Big Island at Waipio Valley.

At the time, Nahko stopped by the island before going on his tour in Australia. A source close to the pair maintained that they’ve been dating for a while.

Woodley previously mentioned Nahko in many of her interviews, saying the singer has changed her life. They still remain good friends despite separation.

Shailene Speaks about Past Abusive Affair: Was Once Involved in an Open Relationship

As an outspoken person, Shailene usually speaks her heart out whenever she sees fit. In an interview with the New York Times, she opened up about suffering from an abusive relationship during her teenage years.

Coincidentally, she has shared a few pictures with guys on her Instagram and a few tabloids are guessing, they might be her exes.

Shailene went on the record to claim that whenever looking for a potential suitor, she necessarily doesn’t think about their gender, but a person as a whole.

Was Shailene Married before?

The short answer to this question is no. She is yet to tie the knot, although she was about to exchange vows with her now ex-boyfriend, Ben. However, we might soon hear wedding bells between her and Aaron. Let’s hope for the best people!