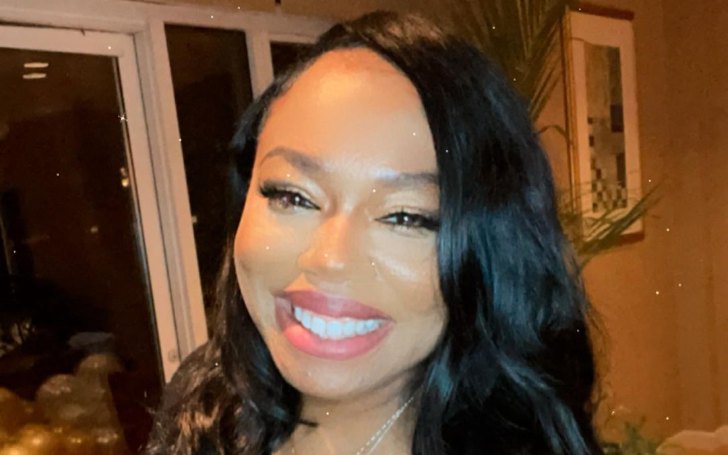 Shaniqua Tompkins rose to fame being the ex-partner of an American rapper, actor, and businessman Curtis James Jackson who is professionally recognized by the name 5o cent. Her ex, 50 cent is one of the world’s best-selling rappers and a de-facto leader of East coast hip-hop group G-Unit.

As a celebrity ex-partner, Tompkins has consistently been in the media and has become one of the most googled personalities of all time. She is more in highlight for her ugly relationship with her former boyfriend Curtis. After her bitter ending with 50 Cent, she is not reported to be in any relationship. But what about her family life? Does she have children?

Here we will talk in detail about the life facts of 50 Cent’s ex-girlfriend Shaniqua Tompkins along with her career, children, net worth, and her ugly relationship. Let’s get into it.

Who Is Shaniqua Tompkins? Details On 50 Cents Former Girlfriend

Shaniqua was born on September 17, 1975, in Queens, New York, the United States. She is a well-known media personality however, she hasn’t shared any details about her early life and her parents. Tompkins is 47 years of age as of 2022 and has a birth sign, Virgo.  She lived the major part of her childhood in her hometown, Queens.

Further, talking about her siblings, she has her younger sister named Ayanna Laws with an age gap of 19 years. Her little sister, Ayanna was born on November 19, 1994, which makes her 28 years old as of 2022. Despite being a huge age gap, the sister duo shared a beautiful relationship and keeps posting to each other on their respective social media accounts.

Besides, Shaniqua comes from a white ethnical background and is an American citizen.

What Does Shaniqua Tompkins Do? Highlights Of Her Career

Moving on to her professional career, she is a producer as per her Instagram intro. Further, she also defines herself as an entrepreneur, mogulista, philanthropist, and visionary on her Twitter account.

Apart from all these, Shaniqua is a host of a podcast show. She appeared as a co-host in the podcast show named 2 Queens from Queen in the year 2016 along with Liza Morales, ex-wife of former basketball player Lamar Odom. Meanwhile, she along with Liza gained credit for changing the stigma of celebrity exes.

Likewise, Tompkins keeps advocating the women’s issues which she also tried to do through her podcast back in 2016. Lately, she has consistently been in the media and uprising her career as a media personality.

What Was Her Podcast Show 2 Queens from Queen About?

The show was launched to reinforce women of every color so that they can identify their uniqueness, strength, and capability. Regarding this show, Tompkins told Essence,

“I don’t think we’ve gone through everything we’ve been through publicly and privately not to be able to help the fellow queen adjust her crown”.

“I wanna share my hurt and my trials hoping it will help them heal theirs. Women of color are beautiful, not by default but by design. And I want to be apart of a new generation of women of color.”

By knowing this, it is clear that the show had its utmost focus on women and their issues.

Her former partner, 50 Cent, who is credited for her popularity, is a well-known American artist. He was born ‘Curtis James Jackson III’ on July 6, 1957, in the neighborhood of Queens. Soon, after growing up, he began his career as a rapper in 1996.

But he became a well-known artist after his first album Get Rich or Die Tryin’ released with the aid of Eminem, an American rapper, songwriter, and record producer. After gaining massive success as a rapper, he further landed as an actor and did several movies like Righteous Kill, Transports, Den of Thieves, and others. Moreover, he appeared in TV series and voiceovers in some video games.

In the mid-90s, she was in a live-in relationship with her former partner 50 Cent. However, their relationship took an ugly turn and the feud continued even after several years of their separation where they exchanged anger towards each other through social media.

Shaniqua and 50 Cent’s relationship turned so bitter that their case reached court. Meanwhile, Tompkins blamed her then-boyfriend for trying to evict her from their New York home and filed a $50 million lawsuit against him. But her case against 50 Cent was dismissed by the court. In this regard, a Singer stated,

“I’m very thankful for this decision, “I knew that once the facts were heard that justice would prevail. I hope now that we can put this behind us and move forward with our lives.”

Tompkins Quit A Reality Show due to 50 Cent’s Threat

She was going to be seen in the reality show Starter Wives, a show which in general speaks about the lives of women who supported their partners before their popularity. For the same show, 50 Cent’s former girlfriend had already filmed a lot. But later she quit due to the reason that her son’s father sued a cease-and-desist order to the channel TLC.

In this regard, the producer of the show stated,

“TLC took his claim seriously, The show was unproven, and [Shaniqua] was unproven as a viable on-screen personality. Every business has their metrics, and when they looked at it, they decided to release her from the cast. The 50 cease and desist was indicative of the disdain he has for her, but also his fear of what she could expose.”

The rapper’s home on Long Island, NY, where Shaniqua was living alongwith her children and 50 Cent caught fire in 2008. That was the same house for which Tompkins filed suit against the singer earlier in a year. The fire in the house was so strong that the first firefighter named Larry Feld who entered the home called it to be suspicious. He has stated,

“I would say there is a strong – a strong, strong – possibility that [the fire] is suspicious. “The rapid movement of the fire. The volume of the fire … It was engulfed. The home was totally gutted.”

Nevertheless, the strong fire in the house didn’t harm badly to anyone except for the hospitalization of six people due to smoke inhalation. This particular incident further increased the sourness in their relationship.

For this incident, Tompkins blamed a rapper stating that the incident is an attempt of the rapper to kill her and her children. In return,  rapper 50 Cent took a dig into her and filed a $20 million defamation lawsuit against Tompkins for her offensive statement following the suspicious fire in the home.

Shaniqua Tompkins’ Family: She Is A Happy Mother Of Two Children

Tompkins’ family life is beautiful as it is filled with her two loving children. She has a daughter named Mia Jackson and a son named Marquise Jackson.

Mia is her firstborn child who is reportedly her daughter from her romantic affair before meeting 50 Cent. Regarding Mia’s birth year, there is no exact information available but Mia’s mother keeps wishing her a happy birthday every year on May 23 on her Instagram account.

Further, Shaniqua’s second child, Marquise was born on October 13, 1996, from her relationship with 50 Cent which ended in the year 2008 when Marquise was 12 years old kid. Both her children grew up under her shadow with all the mother’s love and care.

Her Son, Marquise Jackson Is A Rapper And Actor

Shaniqua’s son Marquise (aka 25 Cent) also choose the entertainment field just like his father 50. He started his career as a rapper with his first single Different. Further, he recorded other titles like Follow Your Heart and Just Another Freestyles.

Moreover, he is also into acting. He has acted in two documentaries related to his father. Likewise, 25 Cent played the character in the 2017 movie named Dope Fiend.

Shaniqua And Her Children’s Relationship

She shares a great bonding with both of her children which we can say through her post on her children that she keeps sharing on her Insta account. She seems to be very proud and very dignified being her children’s mom.

In that respect, her post with her daughter and son is captioned,  “My 2 Heart Beats❤️❤️ @iammiajae @199viq“, “You will never look back on life and think “I spent too much time with my children.”❤️❤️” which assure that she has a beautiful relationship with her children.

Shaniqua Tompkins Is In Instagram; Her Other Social Media

Shanique is hugely active on Instagram under the username @shaniqua_tompkins with 83.4k followers. Further, she is also on Twitter with 3,064 followers where she introduced herself as a

She has been evolving as a media sensation. As per her social networking sites, she is in multiple professions. So, if we believe in some of the websites, her estimated net worth is $3 million.

On the other hand, her famous ex-boyfriend has a net worth of $40 million.