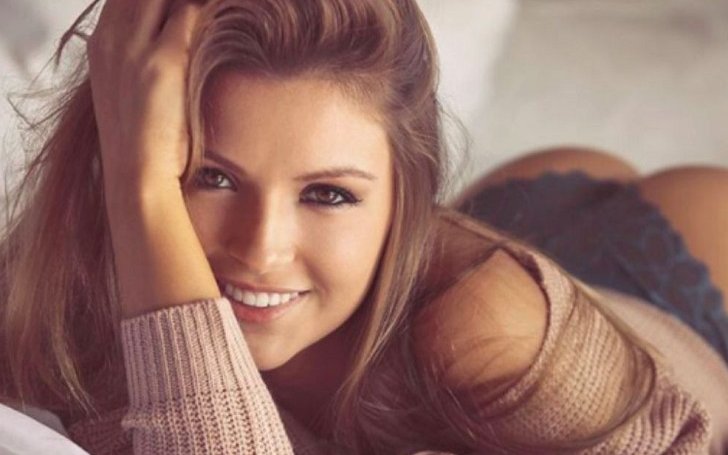 Sofia Bevarly, 26, is a social media star with over 1.6 million followers on Instagram. She gained a ton of attention on the platform for her scantily-clad bikini photos.

Bevarly became the center of media attention after started dating internet playboy Dan Bilzerian. But apart from her relationship with Dan, not much is known about this social media star.

In this article, let’s find out some interesting facts about Dan’s ex-gf.

Who is Sofia Bevarly? Her Bio and Wiki

Sofia is an American social media influencer born on 26th April 1996. She grew up in Fort Myers, Florida, the United States of America. She was brought up by her parents as a single child.

Bevarly completed her graduation from South Fort Myers High School. She later went on to enroll at Florida International University and studied there from 2016 to 2018.

Her career as a Modelling

Upon her graduation, Sofia started out her career as a swimsuit and lingerie model. She gradually became a part of several big brands.

Her Instagram is full of sponsored posts for various brands she represents. She promotes various bikini brands and other clothing items.

Sofia Bevarly is a Vegetarian and an Animal Lover

The social media star is a vegetarian. She also loves animals and advocates for animal rights. She supports the Animal Hope and Wellness Foundation. Headquartered in Sherman Oaks, the organization aims to rescue abused and neglected animals across the globe.

Bevarly also often shares pictures with animals on her Instagram, spreading awareness about them.

The hot Instagram model received wide attention after getting romantically involved with Dan Bilzerian back in 2017. Her beau is known for his hedonistic lifestyle. The spendthrift Dan became popular on social media for his wild parties with scantily clad women.

Sofia And Dan first Met at a Pool Party

In an interview with Square Mile magazine Bilzerian told the couple first met at a pool party. Back then he told the magazine about finding true love for the first time. He said,

“Yeah. Got a girlfriend. First time. Well, I had a girlfriend before, but I was still f**king other girls”

He added, “Wasn’t exactly your storybook love at first sight. I think I f**ked like three girls before her that day.”

Bilzerian said that Sofia is a little different and cool than other girls the amateur poker player has met so far.

“We just started hanging out… She’s just a little different, you know? She’s smart, she’s cool, and she liked a lot of the shit I like. So here we are.”

Bevarly, then-21, started appearing with Dan in early 2017. In February 2017, he posted a photo with his girlfriend from Necker Island.

The two were seen enjoying a 272.155 kg 100-year-old Galapagos tortoise in the picture. In addition, Dan celebrated Sofia’s birthday at a Cannabis farm in Denver, Colorado.

However, their frequent social media appearance slowly faded away. Subsequently, the two broke up.

Why did Sofia Bevarly and Dan Bilzerian split up?

Well, there wasn’t any official confirmation by the two as to why did they decide to break up. However, sources are claiming it might be due to Dan’s nature of falling out of love too soon.

We’ve all seen Dan’s lifestyle and judging by it, it is safe to say he found someone else and moved on. Similarly, Sofia too moved on and is currently relishing her life.

Who Is Sofia Bevarly Boyfriend Now?

No, Sofia is not dating anyone at present. Following her terrific romance with Dan, the social media icon has kept her personal stuff away from the spotlight.

Bevarly enjoys a single relationship status as of 2022.

What is Sofia Bevarly Net Worth?

As of 2022, she has a net worth of $250,000 net worth. She has predominantly made money through her sponsored posts and endorsement deals.

Sofia Has A Huge Followers On Social Media

Like we said earlier, Sofia Bevarly is very popular on social media. Talking of her Instagram, she has over 1.8 million followers. Similarly, she also has over 114k followers on her TikTok. Further, she is also sparsely active on Twitter.

On her social media, she often posts photos and videos from her modeling photoshoots and also her workout videos.