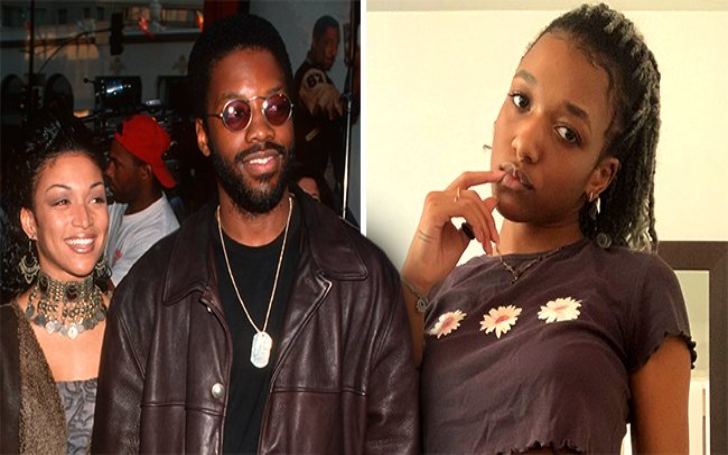 Sophia Hardison is the star kid famous as the daughter of Kadeem Hardison and Chante Moore. Her father is an American actor whereas, her mother is a singer-songwriter, actress, author, and television personality.

The only child of her parents, Hardison was born before her parent’s marriage. Growing up in a family with such a rapport, Sophia’s life has been intriguing for many. Well, is she into acting like her parents? What does she do for a living? Is she married or dating a boyfriend?

So, today in this article let’s find out all the things there is to know about Kadeem’s daughter Sophia Hardison including her age, career, relationship status, net worth, and much more.

Who is Sophia Hardison?

As we said earlier Sophia is the daughter of Kadeem and Chante Moore born on September 27, 1996. Born under the sun sign Libra, she is twenty-five years old as of 2022.

Her paternal grandmother is Bethann Hardison who worked as an African-American model and activist. Sophia has a nice bonding with her granny and parents and frequently posts pictures of her on her Instagram account.

Additionally, Hardison comes from a mixed ethnical background having an African-American ancestry, and is American by nationality.

Both Sophia’s parents are successful figures in the entertainment industry. Her father Kadeem is a well-known American actor who is better known for his work in the television series A Different World where he played Dwayne Wayne. Similarly, he also starred in the TV series K. C. Undercover as Craig Cooper (a Disney Channel series), and in OWN’s Love Is_ as Norman.

Apart from that, Kadeem also made an appearance in the first season of the comedy series Black Monday on the Showtime network. He also starred in the Netflix series Teenage Bounty Hunters as Browser. Furthermore, in 2013 he appeared as an actor in a PlayStation 3 video game Beyond: Two Souls as Cole Freeman.

Moving on, Sophia Hardison’s mother Chante Moore is an American singer-songwriter, actress, author, and television personality. She started her career with the debut album Precious in 1992. The album was marked as gold by the RIAA (Recording Industry Association of America) in 1994. Similarly, her third album This moment is mine was a mega-hit. It included the song Chante Got a Man which achieved a top 10 position on the Billboard Hot 100 and second on the R&B charts.

Aside from her music career, Chante has also starred in a couple of movies and TV series including TV One’s reality show R&B Divas: Los Angeles (2013). In the year 2002, she won a Soul Train Music Award for the song Contagious, and later it was nominated for Grammy.

Sophia Hardison Started Her Career as a Quality Analyst

Being born as the child of famous personalities, many people think that she would also follow in the footsteps of her parents. However, it is not the same for Sophia. After graduating from university she worked as a Quality Assurance from October 2016 to January 2018 for 3BlACKDOT.

It is an organization based in Los Angeles, California, that focuses on building gaming culture and digital entertainment. Afterward, she worked as an Associate Producer for the same company from January 2018 to April 2020.

Additionally, Kadeem’s daughter also loves gaming. She is following her passion and also streams live on twitch. Her channel name is ‘sophadoll’ where she streams multiple games every day.

Besides, she was also in a documentary series Unsung, however, she does not seem to have any plans to take up acting as a career.

Her Parents Married Almost a Year After Her Birth: Are They Still Together?

Sophia Hardison’s parents tied the knot in 1997, a years after the birth of the baby girl Sophia. They were having a blast in their relationship and with the birth of their child, their happiness simply doubled.

However, as every relationship goes through a hard phase, their relationship was also tested with time. But sadly the couple couldn’t fight till the end and due to some irreconcilable differences, Kadeem and his partner Chante parted ways in 2000.

Despite separating the couple remain good friends and decided to co-parent their child. Additionally in an interview with Madam Noire in 2013, this is what Chante Moore said about her ex-hubby Kadeem:

“He appreciates for who I was and who I am and we grew together that’s what friendship is about whether or not we’re married or lovers or whatever the case is, you have to know who you’re with and he and I spent a lot of time together.”

After the divorce, Kadeem dated Cree Summers for a couple of years but is currently single and hasn’t dated anyone. On the contrary, Sophia’s mother has been in multiple relationships. She was in a marital relationship with Kenny Lattimore from 2002 to 2011. The couple had a son named Kenny Lattimore Jr. Moore is currently engaged to Stephen G. Hill.

Sophia who is now 25 years old has great bonding with her parents and shares her memories with them time and again on her Instagram account.

Does Sophia Have a Boyfriend? Her Relationship Status

The Twitch streamer is a private person. She hasn’t shared much information regarding her personal life. The facts about whether or not she is in a relationship remain a big question. Seemingly the star kid is single and doesn’t plan to be in a relationship anytime soon.

She seems to be focused on her career as a streamer. Anyway, let’s hope that we will get to know who will she date shortly.

How Much Is Sophia Hardison’s Net Worth?

The celebrity kid is estimated to have a fortune of about $500,000 which she has earned from her career as quality assurance, associate producer, and streamer.

Similarly, her parents are both multi-millionaires. Her father Kadeem Hardison is said to have a net worth of $2 million and her mother Chante Moore is estimated to have a total net worth of $1.5 million.