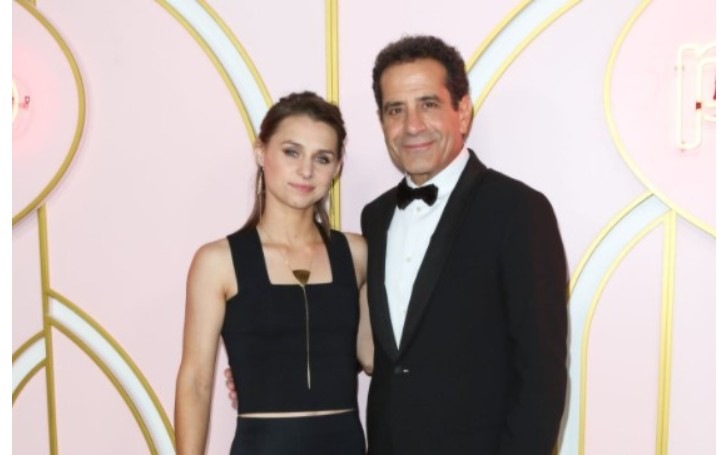 Sophie Shalhoub is a star kid famous as the daughter of Tony Salhoud and Brooke Adams. She is one of two kids between her mom and dad.

Her parents are famed worldwide for their acting prowess. While her father is known for his work in Monk, The Marvelous, Thir13en Ghosts, and Wings. On the other hand, Sophie’s mom Brooke became famous for her work in Days of Heaven, The Dead Zone, and Lace.

While we all know how much her folks are famous, what about Sophie Shalhoub herself? Is she an actor just like them or not? What is she up to nowadays? Is she married? Let’s find out answers to these questions here today!

Sophie Shalhoub Wiki: Is she adopted?

Sophie Rosalind Shalhoub was born on September 9th, 1993, in the United States. Tony Salhoud and Brooke Adams adopted Sophie after they married in 1992.

She belongs to the Caucasian ethnicity and has American nationality. Her adopted father Tony belongs to Lebanese Maronite Christian ancestry while her mom is of English ancestry.

Who are Sophie’s biological parents?

When a child is adopted by a famous celebrity, there is bound to be curious about the biological parents. Likewise, a lot of people are curious to know who is Sophie’s birth mom and dad.

Unfortunately, there is no information in regards to her biological folks. When Tony and Brook adopted her, they didn’t mention anything about how they adopted their daughter.

Does Sophie Shalhoub have a sibling?

Yes, she has one older sister, who is also adopted. Her sister, Josie Lynn, born in 1989 was adopted by her mom, before married her dad.

One would say as adopted siblings, they might not be as close as any other biological siblings. However, the bond between the sisters is incredibly intimate.

Although Sophie isn’t active on social media, her sister Josie has shared a handful of photos of themselves, depicting their closeness.

What is Sophie Shalhoub doing nowadays?

As a star kid, many of you might definitely be thinking Sophie must have followed in her parents’ footsteps and become an actress. Well, you aren’t exactly wrong but you aren’t right either.

To this day, she has one acting credit in All Downhill From Here, a mockumentary-style web series written by her mom Brooke and maternal aunt Lynne Adams. Aside from that, she has not been featured in any other TV series or movie.

On the other hand, reports suggest, she is also an equestrian. Most of the time, she participates in Martha’s Vineyard Horse Council annual open house.

In addition, Sophie used to manage, the Blazing Ridge Farm, a horse sanctuary based in Martha Vineyard.

Sophie was brought up in Chilmark

She along with her older sis were raised by their mommy at Tony and Brooke’s house in Chilmark, Massachusetts. Back when they were young, their father Tony was quite busy with his career.

This is when her mom Brooke stepped up. She literally put her career on the back burner and decided to take care of her daughters.

While growing up in Martha Vineyard’s farms, Sophie had the opportunity of spending time with all sorts of farm animals including horses. This is where she became interested in horses.

If there’s any relationship in Hollywood that is worth being envying for then it’s definitely Tony and Brooke’s enduring relationship.

Initially, the lovebirds first met back in 1989. At the time both of them were cast in the Broadway production, ‘The Heidi Chronicles.’ After watching each other for the first time, they were instantly attracted to each other. Around the same time, Brooke had also adopted her daughter Josie.

Nevertheless, their relationship didn’t start right away as Tony was in a relationship. They settled for friendship, at the time. Despite not being in a relationship, they used to hang out a lot along with Adams, then 11-month old daughter.

When did they start dating?

At the end of the broadway play, regardless of their willingness, Tony and Brooke parted ways. In any case, the duo connected, eight months later when Brooke reached out to Tony after his father passed away. That time, Tony was single so their relationship took off from there on out.

Just two months after getting back together, Tony didn’t waste a single time and proposed to Brooke.

It would not be an understatement to say that it was their oldest daughter Josie who played cupid for the two. You see, when the two used to go out, it was Josie who bought them close. What’s more, Brooke even mentioned in an interview that at just 3-years-old Josie had chosen Tony as her father.

After dating for some time, they decided to exchange vows in April 1992. At the time of marriage, Tony was 38-years-old whole Brooke was 42-years-old.

Both of them were doing plays at the time but that didn’t stop them from marrying. Adams even took three months from the play to exchange vows with the man of her dream.

They said their I Do’s an approximately a 45-minute drive from Times Square in a small town named Sneden’s Landing. As for the spot where they married, they had found this old cottage overlooking the Hudson River.

Is Sophie Shalhoub dating any boyfriend?

Well, back in 2014, in an interview written by Vineyard Gazette, it was written Sophie is dating a guy named Devon. Both of them were based in Martha Vineyard and her bf was a local farrier.

Now, it has been over 7-years since that article came out so one cannot be certain if they are still dating or not. But here’s hoping they are still together.

Meanwhile, her older sister Josie is married to Traver. They first met back during Josie’s trip to NY. She wasn’t really looking for a relationship as she had just gotten out of a long-term relationship.

Nevertheless, Traver stole her heart and they married in 2018. They also share a son named Tucker.

How much is Sophie Shalhoub’s net worth?

This might be one of those topics that are often asked whenever a celebrity kid is in the picture and rightfully so.

As one of two kids between Brooke and Tony, Sophie, without a doubt, enjoyed a lavish life while growing up. Her father is currently worth $20 million and her mom has a total fortune of $10 million which is more than enough to say Sophie lives a rich life.