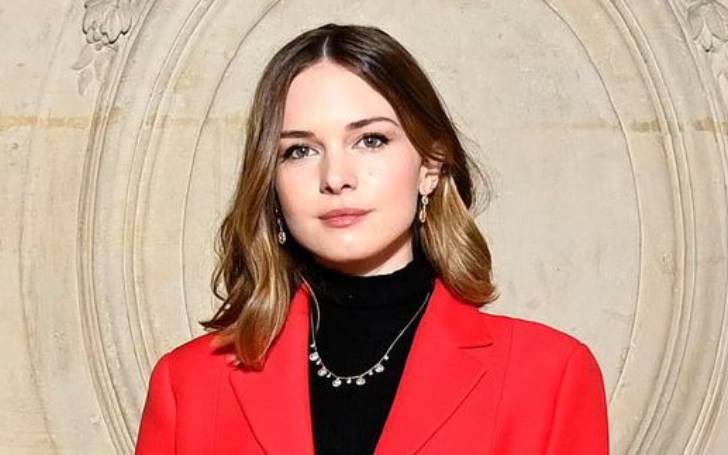 Stella Banderas is a 26 years old star kid, actress, and media personality. She is widely popular as the daughter of actor parents Antonio Banderas and Melanie Griffith.

Coming from an artistic background, Banderas made her way into the showbiz world with her role as Marilyn in Crazy in Alabama. The movie was directed by her father as well. Besides, she also has other handfuls of acting credits to her name.

Moreover, she is also a business owner and runs an online store called Lightbound. As of 2022, she is dating a film student Eli Meyer. Here, learn more about her childhood, siblings, her parent’s relationship, and her boyfriend.

Stella Banderas Was Born In Spain- How Old Is She?

Stella Del Carmen Banderas Griffith was born on 24th September 1996, in Marbella, Spain. She is the daughter of legendary actor Antonio Banderas and actress Melanie Griffith.

Her birth sign is Libra. As per reports, she was named Stella after her mother’s acting teacher Stella Adler.

Likewise, she is an American as per her nationality and has mixed ethnicity. She is Spanish from her father’s side and is Norwegian, Swedish, German, and English from her mother’s side.

The star kid graduated from high school in 2015. On her graduation day, Melanie posted a picture alongside her and her father Antonio with the sweet caption ‘Mama, Stella and Papi, Our angel is amazing. Beginning the next chapter of her life! Freedom!!‘ congratulating her on her achievement.

In 2018, Stella enrolled at the Stella Adler Studio of Acting in New York City, New York just like her other family members.

She is the granddaughter of actress and producer Tippi Hedren and actor Peyer Griffith. Likewise, Stella’s uncle and aunt are Tracy Griffith and Clay A. Griffith.

The 26-year-old actress grew up alongside her half-siblings actress Dakota Johnson and actor Alexander Bauer.

In addition, she is fluent in both English and Spanish just like her father.

What Is Stella Banderas Doing Now?

The rising star Stella is currently running her business called LIGHTBOUNG. It is an online business selling pocket perfume oil, tote bags, and more. Looking at the prices, her Alma perfume oil costs around $60 per 10ml bottle.

As an actress, Stella began her journey in one of her father’s first directed movies Crazy in Alabama starring her own mother Melanie Griffith, her half-sister Dakota Johnson, Lucas Black, David Morse, and others.

The former husband-wife first met while they were still married to their then-partners. After working together in the 1995 film Too Much, they fell head over heels for one another and began dating shortly after their respective divorces from their ex-spouses.

During an interview, Banderas openly admitted that way he fell in love with the actress saying,

“It was very, very fast and very compulsive, but at the same time, we were tied at the time…We tried as much as we could to be respectful.”

Their relationship exceeded rather quickly and the pair got married on 14th May 1996. Similarly, Griffith became pregnant with their first child and welcomed their daughter Stella Del Carmen Banderas Griffith the same year.

Stella’s Father Supported Her mother Throughout Her Addiction Problem

Back in the late 80s, Melanie struggled with cocaine and alcohol abuse to such an extent that she went into rehab for help. Her decision paid back and she left her addictions.

However, in 2000, she became addicted to prescribed medication after suffering from a knee injury. She later admitted that her addiction put a lot of pressure on her marriage and family.

Likewise, Melanie even revealed that Antonio has been supportive and helped her get through it. She revealed,

“He’s always been extremely supportive of me in situations where other people might have run away.”

The former couple pushed through this phase and stayed together for the next 15 years before filing for divorce after almost two decades of marriage. The parents of one got divorced on 4th December 2015 and are still good friends.

Back in September 2021, Banderas went to a Los Angeles court and filed a petition asking a judge to remove ‘Griffith’ from her surname.

According to the official reports, she reasoned her request by simply saying ‘to shorten my name by removing the extra last name’. She further added,

“As well, I typically do not use Griffith when referring to myself or on documents so dropping the name would match my regular use.”

With this news, many speculated that the mother-daughter was having some issues however, they simply denied it.

Who Is Stella Banderas Current Boyfriend?

The 26-year-old rising star Stella is currently dating Eli Meyer. He is a film student who became famous after dating the star kid.

As per reports, the pair started dating in early 2019. Similarly, the lovers made their red carpet debut in December of 2019 during the 23rd annual Hollywood Film Awards in Beverly Hills. The pair were there to celebrate Stella’s father’s award-winning for Hollywood Actor Award for his work in Pain & Glory.

Besides that, the duo was recently spotted vacationing and having a good time in Nerano, Italy. Similarly, two days earlier on 29th August, Stella and her boyfriend Eli stepped out with her father Antonio and his lover Nicole Kimpel to enjoy Marbella’s Starlite Festival.

Although the lovebirds haven’t hinted or shown any signs of getting married any time soon, hopefully, we will get to see Stella walking down the aisle soon.

With her career as a businesswoman and an actress, Banderas surely is earning a decent amount. As of 2022, her current net worth is estimated at around $1 million by several tabloids.

Who Is Harry Joseph Letterman? All About David Letterman’s Son