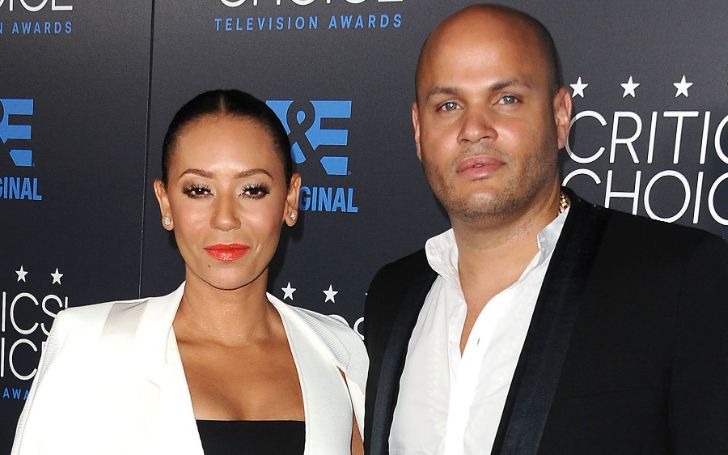 Stephen Belafonte is a well-known film producer and director known for being Mel B‘s ex-husband. He has produced and directed many movies, including Mutant Chronicles (2008), The Crow: Wicked Prayer (2005), and Bad Lieutenant: Port of Call New Orleans. Similarly, his ex-wife Mel B is a famous singer and actress mainly known for being a member of the Spice Girls.

The celebrity spouse is mainly known just for being linked to his former partner. However, a lot of people and the media want to know more about him as well. They have a lot of queries regarding the producer and also want to know the reason behind the former couple’s divorce.

Apart from that people also want to know other facts like information regarding his parents, siblings, net worth, and more. Similarly, does Stephen have any children, and is he in a relationship or dating someone? Hence, this article will give you insight & information about Stephen Belafonte, Mel B’s ex-hubby.

Who is Stephen Belafonte? Details on His Parents, Early Life, and Age

As we said earlier, he is a film producer and director. Belafonte was born on May 18, 1975, in Hollywood, Los Angeles, California. He is the son of Thomas Stansbury and Sheryl Stansbury. Talking about his age, Stephen is 47 years old as of 2022.

He has a brother named Jeremiah Stansbury and five others whose names are still under the radar. When Stephan was 12, he moved to Point Pleasant, New Jersey with his siblings and mother.

What is Stephen Belafonte’s Real Name?

His real name is Stephen Brain Stansbury. He changed his surname from Stansbury to Belafonte at 18 when he moved to Los Angeles from New Jersey.

He is a Film Producer/Director

Stephen Belafonte started his career after graduating from the university by launching a film production company called Remag. He began to direct and produce a lot of documentaries focused on rappers. Similarly, Later down the line, he produced and directed a handful of TV shows and movies.

Belafonte is best known for Thank You For Smoking (2005), The Crow: Wicked Prayer (2005), Mutant Chronicles (2008), and Bad Lieutenant: Port of Call New Orleans (2009). Apart from that, he is also working as a manager for Malu Trevejo who is an artist and public figure. Similarly, according to his LinkedIn account, he is the owner of Osiris Entertainment which he started in January 2007.

Stephen Belafonte and Mel B Were Married for 10 years

The former couple got secretly hitched on June 6 2007 in Las Vegas but later decided to remarry in front of their family members and friends on November 8, 2008, in Hurghada, Egypt. The duo was together for 10 years before deciding to walk their separate ways.

They first met on the set of the movie Talk and started dating in February of 2007 and decided to take their relationship to the next level in June of 2007 just 3 months after dating.

The Couple is Blessed with a Daughter

The former pair is also blessed with a daughter. Melanie gave birth to her daughter on September 1, 2011. The duo named their daughter Madison Brown Belafonte. She is 11 years old as of 2022.

Melanie Brown Filed for Divorce, What was the Reason?

The Spice Girls member Mel B filed for divorce against Stephen on 20 March 2017 citing irreconcilable differences. She also requested for having joint custody of their daughter Madison and for the spousal support of Belafonte to be dismissed.

Apart from that she also blocked him from using her bank account. According to Brown, Stephen was in control of her £40 million fortune and controlled how it was spent throughout their marriage.

The famous singer/actress was given a restraining order against Stephen, forcing him to stay away from Melanie and her children. She claimed he would physically and sexually abuse her throughout their 10 years of marriage.

Additionally, she also said that he has multiple sex tapes of her and threatened to publicize them to harm her image. Likewise, she also accused him of having a gun despite being prohibited from carrying one as he was previously charged with domestic violence involving another woman. According to her, it is either a .357 or .38 magnum.

When Stephen’s ex-wife made the allegation, in response to it the producer/director said it was not true including the claims of their nanny being pregnant. He said it was outrageous and unfounded.

In a statement obtained by TMZ Stephen calls Mel B a liar and that she is doing it to protect her image and TV career. His lawyer said its a shame that Brown didn’t humbly take the private matter and that Belafonte vehemently denies the allegations adding,

“When the Court determines the truth, it will become clear that this entire charade was nothing more than a smear campaign intended to cover up Ms. Brown’s own conduct during the marriage in light of her current involvement with a family television show, and in an effort to unfairly gain leverage both financially and with respect to the custody of the children.”

The legal battle between Stephen and his ex-wife ended after a private deal between them. According to the deal, the producer was free from the restraining order and granted access to his child. However, he was not granted visitation rights to his stepdaughter.

In addition to that, Mel B was ordered to pay £270,000 in legal fees within 30 days and £3,800 for child support every month. Similarly, the money she gets from selling the couple’s $6 million mansion.

Mel B’s ex-hubby was previously married to Nancy Carmell in 1997. However, the marriage was short-lived. It only lasted for two months after she went to her hometown in Honolulu and asked for the marriage to be declared invalid.

After that Stephen was in a relationship with a model Nicole Contreras with whom he had a daughter Giselle Belafonte in 2004.

On the other hand, Melaine Brown was previously with Dutch dancer, Jimmy Gulzar from (1998-2000). They share a daughter Phoenix Chi Gulzar. Similarly, she also dated Eddie Murphy and the pair shared a child Angel Iris Murphy Brown in April 2007.

The film producer/director has been in multiple controversies apart from his divorce from Melanie Brown. He was accused and charged with stealing in New Jersey in 1994. Similarly, in the year 2000, he was accused of beating up two men, however, the case didn’t proceed further after Stephen agreed to pay for the damages dealt to their vehicle.

Three years later, he was charged with domestic violence against his former girlfriend Nicole Contreras. Further, in 2007, he admitted to killing a duck with a brick outside his house but flew to LA without paying his fine of £300. Lastly, in 2010, in an outing with his then-wife Mel B, he got into a fight with three men in May Fair Hotel where one of them needed medical attention.

A Short Introduction to Stephen’s Ex-Wife Mel B: She is a Singer and Actress

Melanie Janine Brown was born on 29 May 1975 in Leeds West Yorkshire, England is an English singer-songwriter, actress, and famous television personality. She is best known for being a member of the girl group Spice Girl in the 1990s. The group sold over 100 million records worldwide and also became  the ‘Best Selling Female Group of All Time.’

Similarly, during the group hiatus, she debuted with the solo album Hot (2000). The album’s one song in particular named I Want You Back reached the first position on the UK Singles Chart. She has released multiple songs including Feels So Good, and Tell Me which also reached the top five on the Singles Chart.

She also released a song For Once in My Life in 2013 after eight years of break. The song was a hit, reaching number 2 on the Billboard Hot Dance Club Songs Chart.

Apart from her music career, Mel B is also a television personality. She has participated in the American dance competition series Dancing with the Stars (2007). Furthermore, she has also been the judge of many shows including The X Factor, America’s Got Talent (2013-2018), The Masked Singer Australia (2022), and more.

Mel B’s former husband is estimated to have a total net worth of $1 million. He has accumulated his fortune from his career as a producer and director and similarly from the amount he earned from the divorce settlement he got from Melanie Brown.

On the other hand, his former other half, Melanie Brown is estimated to have a total fortune of $6 million. She has earned her wealth from her career as a singer and actress.

Andrea Bock, Ty Pennington Ex-Girlfriend; Has she re-married and have kids?