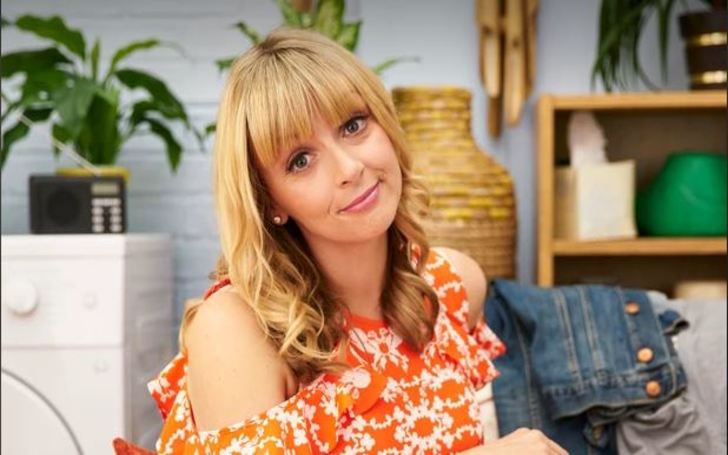 Lisa McGrillis is an English actress, known for films Inspector George Gently (2007), Hebburn (2012), and The Pass (2016). She is also famous as the wife of Scottish actor Stuart Martin whom she has been married to since 2015. People also recognize her for playing Kelly in the BBC Two series Mum.

It’s been a couple of years since one of Lisa’s signature roles, Kelly ended with Mum‘s finale in 2019. In the meantime, McGrillis is also a familiar face thanks to her other dozens of series and films.

Here are all the details narrating her early step to becoming an actress, her major roles, and a little lot about her personal life; husband, children, and so on.

McGrillis was born in Scotby near Carlisle, Cumbria. Her mother was a special needs teacher and her father an accountant.

As a kid, the English actress didn’t excel at school, except at theatre studies. She thought she might end up doing drama therapy. And so she went to study performing arts at Northumbria University. McGrillis, however, later revealed it was a bit of a Mickey Mouse course. She thinks she just got pissed for three years and only did six hours a week of learning.

The Carlisle-born actress’ first job was with a Theatre in Education company, touring a show about safe sex around schools in Derbyshire. She portrayed a drunk girl in a tent in a skit about condoms. Lisa admits that it was the exact moment where she realized acting is something she wanted to do forever.

At the beginning of her career, she split her time between on-screen and stage acting but later gravitated towards the world of TV.

McGrillis’ acting journey began in 2005 when she appeared in the short comedy The Door Stop. After that, she acted in the TV film Spit Game in 2006.

The British star’s fame in the mid-2000s diminished a little bit with few appearances on the screens. But since 2012 with the role of Vicki in the BBC 2 sitcom Hebburn, her fame got back on track.

The blue-eyed actress became a more familiar face with roles coming in the likes of Inspector George Gently, No Offence, Death in Paradise, and Channel 4’s series Deadwater Fell.

McGrillis got her another famous part after the series creator, Stefan Golaszewski and Mum director Richard Laxton saw her in The Pass at the Royal Court Theatre in 2014.

After finishing Mum, Lisa starred in the mini-series, Deadwater Fell as Sandra McKay. She then acted as Joanne in the TV movie, Bumps before starting to portray Kay in another BBC series, King Gary. Her last movie role was a female detective in Edgar Wright’s 2021 film, The Last Night In Soho. McGrillis’ next appearance will be as Sue in Channel 4’s dark comedy-drama series, The Birth Of Daniel F Harris.

Lisa McGrillis Is Married To A Scottish Actor

They met at a Christmas party in the National Theatre bar. Lisa had just landed a part in The Pitmen Painters, by Lee Hall of Billy Elliot fame in 2007. Consequently, she had just arrived at London’s National Theatre and then to Broadway.

As mentioned, Lisa McGrillis’ husband, Stuart Martin is an actor hailing from Ayr, Scotland. He is known for his roles in Babylon, Jamestown, and Medici: Masters of Florence.

Lisa’s husband, Martin has also played in several shows. He made his TV debut in 2009 in Taggart appearing as Jamie Revie for a single episode. He has acted in four episodes of Hebburn which also features his wife as one of the main casts.

In 2014, he made a one-time appearance in HBO’s hit medieval drama series, Game Of Thrones. He gets credits as a Lannister Soldier in an episode entitled, Two Swords. His other TV projects include Babylon, Crossing Lines, Silent Witness, Medici: Masters of Florence, Jamestown, and Miss Scarlet and The Duke.

Together they are parents to a son, Joshy. The Mum star once revealed during the birth of her child, she really had it tough. Ten weeks after delivering her baby, she went back to work to film the last ever series of Inspector George Gently in Durham for eight weeks, then did nine more weeks on Mum. The actress with a Geordie accent said she didn’t see Joshy awake from Monday to Friday for nine weeks which was physically and emotionally exhausting.

On January 2, 2021, McGrillis and her spouse, Martin welcomed another child, a daughter. However, the actress later mentioned her little girl had to be rushed to the intensive care unit right after her birth. The Hebburn star, though, didn’t reveal what were the complications.

Some Other Facts About Lisa McGrillis: