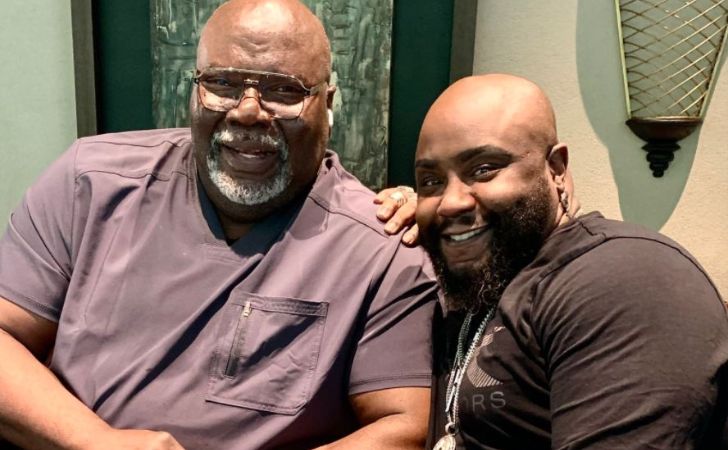 Jermaine Jakes is a data entry analyst by profession. However, his recognition is not because of his profession but as a member of the Jakes family. He is famous as the son of an American bishop, & filmmaker T.D. Jakes and his wife Serita Jamison.

Though he comes from a family of writers and filmmakers, Jermaine has chosen a completely different field of profession. In fact, over the years, he has been doing decently well in his career. But what about his love life? Is he married or dating a girlfriend?

In this article, we are going to explore every aspect of his career, relationship, parents, and much more.

Jermaine Jakes Is The Son Of Author T.D. Jakes

If you didn’t know, Jermaine Jakes is one of the five sons of T.D. Jakes and mother Serita Jamison. He was born on January 4, 1980, in the United States. As of 2021, he is 41 years old, and his birth sign is Capricorn.

Talking about his education, he attended Yvonne A. Ewell Townview Magnet Center High School from 1996 to 1999. There he studied Education and Social Service.

His Parents Are Successful People

Talking of his father’s professional accomplishments, he has authored numerous books that include Woman, Thou Art Loosed T. D. Jakes, Soar! Build Your Vision from the Ground Up, He-Motions, and numerous others.

Apart from books, he has also been a part of numerous movies like Not Easily Broken, Jumping the Broom, Winnie Mandela, A Dog’s Way Home as an actor and producer.

Like his father, Jermaine’s mother is also an actor and has appeared in the 2009 film Not Easily Broken. Similarly, she has also authored books like The Princess Within: Restoring the Soul of a Woman, Beside Every Good Man: Loving Myself While Standing By Him, to name a few.

As of now, Jermaine leads a career as a Data Entry Specialist at T.D. Jakes Ministries. He is working in the position since January 2018. Apart from this, he also holds the position of Lead Stage Manager since April 2015.

Similarly, he is one of the members of The Potters House of Texas, where he handles different job positions for years. There, he has been handling positions of Production Director, Production Manager of Staging, & Coordinator Of Volunteers.

In the past, he also worked as Artist and Recruiter Development at Dexterity Sounds Inc. Later, from January 2007 to February 2009, he was the Audio Visual Technician at The Potter’s House of Dallas.

Jermaine Jakes was Arrested For Alleged Misbehaviors with Police

Back in 2009, Jermaine Jakes made headlines after alleged misbehaviors with undercover Dallas police detectives at Kiest Park. As per the police, he allegedly walked up to the police at West Kiest Boulevard & South Hampton Road on 3rd January 2009 and jerked off in front of the officers.

Well, Jakes’ bond was set at $1000 and his charge was a Class B misdemeanor, punishable to up to six months in jail and a $2000 fine. His father also made a comment stating the act was unfortunate. He said,

“As parents, we occasionally feel that our children do not live up to our highest and best ideals. When they do not, we don’t diminish our love for them as recompense for our disapproval. Like our children, we also are not infallible nor do we profess to be. It is in moments like these that I am so grateful that we do not preach that we are the solution.”

Is Jermaine Jakes Married To Wife? Any Girlfriend?

Despite being a son of famous celebrities, Jermaine has been leading a very low-profile life. There are no reports on his marriage or romantic relationships so far.

At 41 years old, he is pretty much likely to be married, but unfortunately, there are no authentic claims to prove his marriage. Also, he has not made any public statement about himself being married. Thus, it is safer to say that he is not married at present.

Apart from this, there are also no reports on his romantic relationships and girlfriends. Apparently, he is not dating anyone at present.

What Is Jermaine’s Net Worth?

As a successful professional, Jakes undoubtedly earns a good amount as his salary. But unfortunately, he has not revealed his net worth in the public yet. On the other hand, his father T. D. Jakes is pretty wealthy. As of 2021, he has a net worth of around $20 million, as per Celebrity Net Worth.

Like any star kid, Jermaine Jakes is pretty much on social media. He is on Instagram with over 5k followers and goes by Jermaine D. Jakes. But unfortunately, he has kept his Insta in private.

Who is Andrew Wilson’s son Joseph Obiamiwe Wilson mother? What is he doing now?