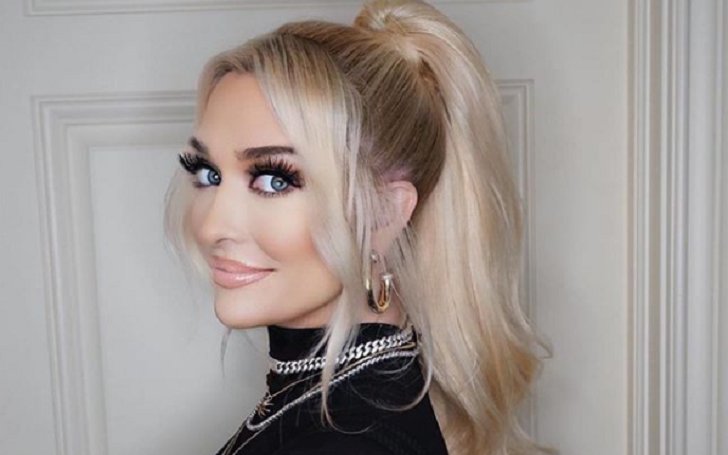 Thomas Zizzo is the ex-husband of Erika Jayne, a singer, and an actress. His former life partner Erika rose to stardom after her debut single ‘Roller Coaster’ went viral even ranking first in the US Billboard Dance Club Songs.

Besides, as for their married life, the former couple were married for a few years before they went their separate ways. The former flames also shared a son Tommy, a police officer. After their split, Erika went on to marry a veteran lawyer Thomas Girardi. But what about her ex-husband Zizzo’s love life? Is Thomas moved on with anyone?

Today, here we will discuss Thomas’ marriage to Erika and many other interesting facts about him!

Who is Erika Jayne Ex-Husband Thomas Zizzo? His Early Life and Nationality

Zizzo is a former DJ at the popular Manhattan hotspot, China Club. He was born in the mid of 1960s in Italy. He holds Italian nationality and belongs to the Caucasian ethnicity.

Thomas and his ex-wife Erika tied the knot in December 1991. The two exchanged their vows at St. Patrick’s Cathedral. The television personality described their wedding as “big, obnoxious, and pink.”

How Did Thomas Zizzo Meet his Wife?

Erika moved to New York City at the age of 18 and started performing as a part of a number of girl groups at the time. She held a survival job in New Jersey, dancing at go-go clubs.

A year later, while performing in China Club, Jayne came across her future husband Thomas. He was a DJ at the club. Erika described her hubby as “a tall, muscular Sicilian with the kind of streetwise swagger that only native New Yorkers can muster.” The singer added, “He was an absolute piece.”

Eventually, around six months after the two began dating, they started living together. Erika is seven-year younger than her man but their age difference never directly hampered their matrimonial relationship.

Do Thomas Zizzo and Erika Jayne Have Kids? Their Son is a Police Officer

Yes, the couple shares a child. Erika gave birth to their son Tommy Zizzo at the young age of 20. She told that her boy

“was not crying when he came out. He was just kind of looking around, with his big blue eyes… When the doctor put him into my arms, it wasn’t like I was meeting a stranger for the first time. I felt like we were two souls being reunited after a long break.”

Their grown-up child is a police officer by profession. She said that her son always wanted to be in law enforcement and also admits that his job is highly risky. She said,

“It’s a dangerous profession. I’ve known my son was going to be in law enforcement from the time he could walk and talk.”

On 5th May 2020, the entertainer shared a rare photo of her son in his police uniform on Insta. She wrote, “People say we look alike. No, you can’t comment,” on the photo.

Tommy attended Rhodes School, New York College, and later studied at the Los Angeles Police Academy from where he graduated in 2014. He previously worked at the Jersey City Police Activity League.

In September 2020, Erika also shared a throwback photo of her son with the caption, “I took this picture on New Years’s Day in Tanzania years ago. This trip was one of our favorites. Travel with your children, show them the world.”

Tommy used to live with his mom and step-dad. His mom told The Daily Dish,

“I actually love having my son there. He’s free security, OK? Free security and he never lets me forget it.”

Erika further added that her attorney hubby “travels all the time” so it is nice to behave her boy around.

Thomas and Erika split when their son was even a toddler

Despite their initial romance, Thomas and Erika’s relationship didn’t last long. The couple separated when their child was a little more than 18-month. Erika told that their marriage dissolved into divorce because of herself.

She said, “I feel like my marriage came apart because of me, not because of anyone else. I can take responsibility. I knew I was a good mom. I thought I was adult enough to be a wife and a mother, but really I wasn’t. Tommy bore the brunt of that. It was this constant pressure and it was hard for both of us to take.”

After their split, Tommy started living with his mother and moved to Los Angeles.

Is Thomas Zizzo married for the second time? His ex-wife Married Thomas Girardi

Thomas after his divorce from Erika has been completely out of the media light. So we are yet to confirm whether Zizzo is married.

On the other hand, his spouse Erika had been in a wonderful marital relationship with her second hubby, Thomas Girardi.

The ex-couple married in Jan 2000. Although Girardi is over 30-year older than his wife, the exes led a happy matrimonial life for over two decades. However, their relationship dissolved in November 2020 but their divorce is yet to finalize.

Born and raised in Atlanta, Jayne has a splendid career in the music and acting field. She has released a number of chart-topping songs. She was also ranked 42 on the list of greatest dance club artists of all time by Billboard.

Prior to music, Erika embarked on the field of acting in the early 1990s. She is the main cast member of The Real Housewives of Beverly Hills. Moreover, in 2017, the actress also appeared in Dancing with the Stars.

Thomas has a net worth of $100,000 as of 2022. On the other hand, his ex-wife Erika has an estimated $5 million. She mainly makes money through her multiple works.