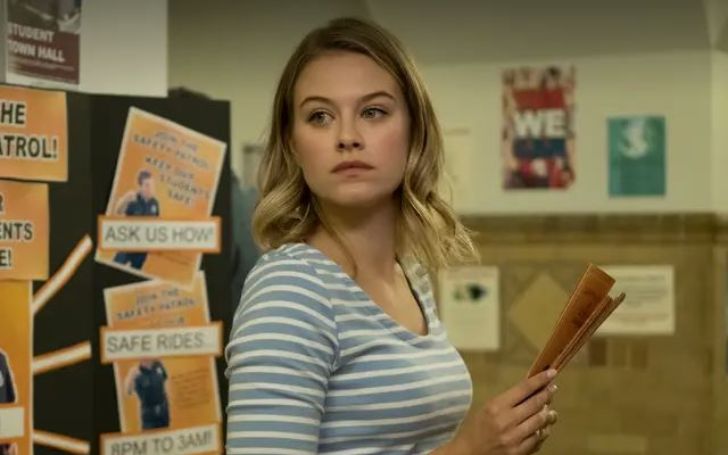 Tiera Skovbye is a Canadian actress who has been on series such as Riverdale, Once Upon a Time (playing Robin Hood in the fantasy series’ seventh season), and true crime series Dirty John and Nurses, a Canadian medical drama that recently started airing in the US on NBC.

Tiera has been acting her whole life landing her first role at the tender age of seven. Although she started acting more than a decade ago, Tiera’s career undoubtedly gained international momentum after landing the role of ‘Riverdale’s mysterious sister and runaway lover Polly Cooper.

As a child artist, Skobvye was also in series such as Eric Kripke’s ‘Supernatural’ and DC’s ‘Arrow.’ The 25-year-old actor is now in the ascendancy, with a lead role in an NBC-syndicated drama, Nurses, and a million-strong following on Instagram. Know more about her in the headings that are to follow; how exactly she dived into acting, her acting credits so far, her love life, and more.

The five-foot-nine-inches tall actress Tiera Skovbye who was born on May 6, 1995, in Vancouver, Canada is rather of Scandinavian descent. The 26-year-old Skovbye has lived most of her life in the city of Vancouver.

She’s of Swedish descent and all of her extended family still lives there and in Denmark. Tiera’s uncle Kim Skovbye is a musician living in Copenhagen, Denmark. Her grandmother grew up during the war in The Netherlands.

Tiera Skovbye Was Seven When She Started Acting

Skovbye started out as a child actor after a scout spotted her at a children’s festival in Vancouver when she was six or seven years old. Of her early acting stages as a child artist, Tiera once said,

“I don’t think I had the very typical child-actor experience. I wasn’t home-schooled, or tutored on set …  feel like I was able to develop a very full character just living a normal life.”

Skovbye’s family didn’t have much background in the arts except for a great-grandfather who enjoyed a stage career in Sweden.

Her parents, nonetheless, remained supportive of her and her sister, Firefly Lane actor Ali Skovbye. Not long after meeting the agent, Tiera started doing commercials, and her first thing was a Ford truck commercial when she was seven.

In the meantime, she also started studying at acting school in Vancouver, and that’s when her parents realized that it was something that she was actually going to pursue. With a dream of becoming an actress, she enrolled in the top acting schools in Vancouver.

Her parents gradually put her into all sorts of extracurricular activities, so that she had any opportunities that she wanted. Tiera first ventured into the showbiz world as a youngster in theatre, reciting Shakespeare and Mary Shelley’s most acclaimed oeuvres.

Tiera used to take acting classes up until the late 2010s and possibly is even attending to this day. Explaining the reason behind her classes, Tiera said she takes it as athletes during the off-season, who are not going to stop training and expect to go into the next season 100%.

Tiera Has Appeared In Many TV Shows And Films

The elder Skovbye sister’s first substantial role, however, was as the 10-year old Jane on the drama series Painkiller Jane in 2007. It wasn’t until she was about 11 that she had booked her first TV gig in Painkiller Jane. She played the younger version of the lead actress appearing in three episodes.

In the years that followed Tiera Skovbye’s television debut, she went on to land small roles in a wide array of shows including The Haunting Hour: The Series, Supernatural (2005), The Troop (2009), Wingin’ It (2010), and Spooksville (2013).

In 2017, Tiera began playing the recurring role of Polly Cooper on The CW teen drama series Riverdale. For her, Polly Cooper sounded like the dream role as she was an avid reader of the Archie comics since childhood and lived in the same area where the show was being filmed.

Skovbye has also appeared in a number of television films, most notably Lifetime’s The Unauthorized Saved by the Bell Story in which she portrayed the character of Elizabeth Berkley.

Her career began to take off for the first time when she was cast as Elizabeth Berkley in The Unauthorized Saved by the Bell Story. Though with her current role as Grace Knight in Nurses, Skovbye’s career has been looking more promising.

She has also been in films including Midnight Sun, 2 Hearts, The Miracle Season, Summer Of 84, Prodigals, and others.

Tiera has said that her ultimate goal is to be [a full-time] actor.

Tiera Skovbye Is Also A Model

In addition to acting, Tiera is also a model. Tiera became a beauty icon after an international model agency scouted her in 2008.

Skovbye says for her modeling now is something she does more for fun, and a chance to travel. As a model, Tiera has graced the pages of internationally acclaimed publications like Elle Canada, Wedding Bells, Plaid, Chloe, and Elle China.

The actress who has a Scandinavian background is represented by Next Models Management Canada.

A few years back the Riverdale actress was about to marry a fellow actor and producer, James Parker. Parker and Tiera Skovbye had gotten engaged in Aug 2017 on the Kinsol Trestle near Shawnigan Lake. Parker had asked his then 22-year-old girlfriend to marry him ‘in his childhood bedroom.’

Before that, the couple had been together for more than two years and had also collaborated on the film, Summer of ’84, which Tiera starred in and Jameson produced. Right after saying yes to Parker, the Canadian actress took to Instagram to announce that over the weekend she got engaged to her longtime producer boyfriend.

Along with a trio of photos of her and her then-boyfriend, Tiera wrote,

“This weekend was something out of a dream. The love of my life surprised the crap out of me and asked me to marry him in his childhood bedroom (not planned, I’m really hard to surprise).”

Parker reportedly had the ring custom-made in East Vancouver based on a photo that Skoybye had sent when the couple was nine months into dating. Stories of the couple’s engagement appeared in Cosmopolitan, People, Us Weekly, and Teen Vogue.

The actress and the producer now, however, aren’t together. In Nov 2021 it was reported — while many publications listed Tiera and Jameson as still engaged, the truth was that they had broken up some time ago off the radar. And the former couple didn’t give any public explanations as to what went wrong.

Jameson, as of now, has a new girlfriend in model and entrepreneur Hannah Maree Todd.

Her Sister Is Also An Actress

Tiera Skovbye is the older sister of a young woman, Ali Skovbye or Alissa Skovbye. Ali also has a long list of credits to her name including appearing in 10 episodes of Firefly Lane.

She also has notable roles in other shows like The Gourmet Detective and Once Upon A Time. Tiera played the older sister of her actual little sister Ali in Forever 16.

Skovbye auditioned thrice for the role of Betty Cooper in the CW’s Riverdale but failed to land the part. In an interview with Independent in Feb 2021, Tiera said she burst into tears after messing up her third audition for Riverdale.

“I was so nervous in my third callback that I just forgot all my lines.”

“I remember leaving that audition and just crying. I told my mum, ‘I quit. I’m done. I’m a terrible actor. This was the worst mistake ever.’”

The role eventually went to Lili Reinhart. Skovbye, later, however, would be in the show anyway as she got to play Betty’s sister, Polly not long afterward.

Tiera Skovbye Also Auditioned To Be In Twilight Franchise

Tiera was also up for a role in the Twilight franchise when she was around 12 or 13. However, when she got a callback, Skovbye was at summer sleepaway camp for a week. The camp also forbade her to have cell phones so her parents informed her about the call back through the head office.

Recalling those times when she was up for a role in the Twilight franchise, Tiera said,

“I was at summer sleepaway camp for a week when I was 12 or 13, and I got a callback for one of the Twilight movies. There were no cellphones allowed at camp, and my parents called the head office. I thought, ‘Oh no, something bad happened.’ And they said ‘Hey, you got a callback. Do you want to do it?’ I was like, ‘I’m on an island in the middle of nowhere. How am I getting to this audition tomorrow?’

Her father then rented a little speedboat and drove for two hours to come and get her. While she did make it to the audition,
Tiera didn’t get the role – but it was still worth it, said the actress who hails from Canada’s coastal Vancouver.