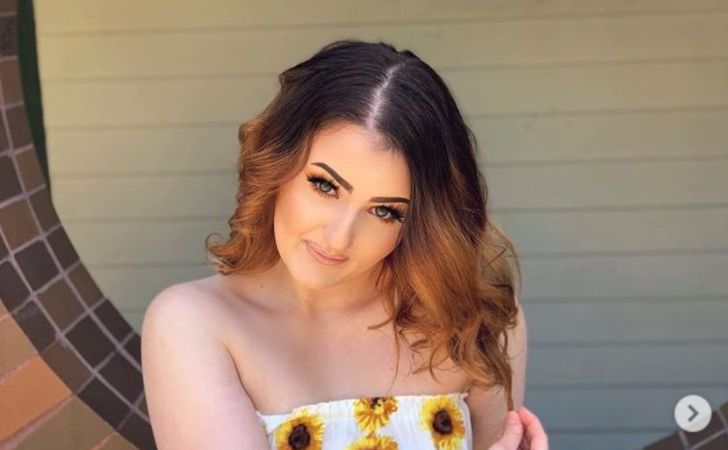 Mikayla Nogueira is a makeup artist and content creator. She is widely popular for her makeup tutorials and comedy videos on TikTok. Likewise, she is also hugely active on Instagram, where she posts lifestyle content & occasionally gives insight into her personal life.

Talking about her personal life, Mikayla just recently revealed the man in her life. So, who is her boyfriend? Well, in this article, we are going to explore everything about her career, parents, relationships, and other interesting details about her.

Let’s zoom in on it.

Beautiful Mikayla Nogueira was born on June 13, 1998, in Massachusetts. As of 2023, she is 24 years of age. She spent most of her early childhood in her hometown with her father Michael Nogueira and her mother Patrice Nogueira, an elementary school social worker.

Needless to say, she shares a great relationship with both her parents. In fact, she even often posts photos of her dad and mum on social media. Besides, she also has a brother named Nathan Nogueira, whom she is pretty close to.

Talking about her education, she did her schooling at a local school in her hometown. Later, she received her Bachelor of Arts degree in Communication from Bryant University.

While she has achieved a stable career as a make-up artist and a social media influencer, things were not always the same. Prior to making it big with tutorial videos on TikTok, she did jobs at several firms.

Around the second year of college day, she picked up a job as a Shift Leader & Food Service Worker at Tropical Smoothie Cafe. There she worked for two years from June 2017 to July 2019.

Similarly, from May 2019 to August 2019, she did a four months internship at Townsquare Media, as a Communication intern. Apart from this, from May 2019 – Oct 2020, she was a Buty Advisor at Ulta Beauty. However, she quit the job to pursue TikTok full-time.

Nogueira Has year of Experience As Beauty Expert & Makeup Artist

Though Mikayla gained mainstream popularity as a make-up artist recently, she has been pursuing it for years. By the age of 10, she was heavily into make-up, and even though she attended a formal school to hone her skill, she later chose a conventional degree.

Despite that, she has incredible skills as a makeup artist. The most interesting thing is that she has been working as a Beauty Expert & Makeup Artist for years as a freelancer. As per her LinkedIn, she started freelancing in January 2007 and continued to do so even at present.

Want To Know: About Another TikTok Star Oneya Johnson? Check This Out

Besides, she also does consultations on the majority of beauty topics like makeup, skincare, cosmetics, facial enhancements, and a lot more. Likewise, as a makeup artist, she specializes in simple everyday makeup to complex, intricate bridal, and even glamorous makeup looks.

She Is Planning To Get On YouTube As Well

After receiving unprecedented fame on TikTok, Mikayla Nogueira is planning to expand her wings on YouTube.  In a March 2021 interview with Allure, she revealed her plans to have a channel on YouTube.

She stated that doing product reviews in 60 seconds is not detailed enough. Moreover, she also revealed that she has already started building a YouTube studio. On her channel, she plans to make videos covering every piece of information, detailed 30-40 minutes make-up tutorial videos.

I love doing product reviews on TikTok, but 60 seconds is not enough time. I’m building my YouTube studio right now, but I want my videos to be very different. There has to be, you know, humility in it, and it has to be relatable and fun. You don’t want to sit through a 30- to 45-minute tutorial. It has to be wicked interesting.

Who Is Mikayla Nogueira’ Boyfriend?

First of all to all those who were unaware that she is in a relationship, yes, Mikayla has a boyfriend named Cody. She revealed about the man in her life on March 22, 2021, via a TikTok video.

The TikTok star revealed how she asked Cody to not propose to her to be his girlfriend for three months and interestingly he stick to the rules. Well, after three months, Cody came up with flowers and scrapbooks with pictures of them together, aware of the fact that Mikayla loves scrapbooks.

Not only this but her boyfriend also gifted her a polaroid camera on Valentine’s day so as to get memories in the scrapbook. Besides, after revealing her boyfriend Cody, she also made a couple of videos on her other TikTok account where they talked about their relationship.

Talking about what Cody likes about her, he came up with heart-touching answers. He said,

I like building things for people. I mean, being able to build things and to see the satisfaction on people’s faces, you know, when they are sitting on this new deck we built and all the kids running around with their dogs, and the fenced yard we just put up, knowing that people are happy because of the stuff that I do, that’s rewarding to me.

I just like to do work that makes me feel good and makes me feel like I have a purpose in life because I need purpose. I need to have that foundation in my life in order to be happy and that’s what fulfills me.

The couple shares a great relationship and hopes their love continues forever.

What Is Mikayla Nogueira Net Worth?

She has a really good following on her TikTok that has almost touched the 5 million mark. With make-up videos that she has been posting on the platforms, she has gathered a decent amount of sponsors. Thus, it is pretty likely that she earns a few thousand dollars for every post. Talking about her net worth, she is estimated to have at least $1 to $2 million in net worth.