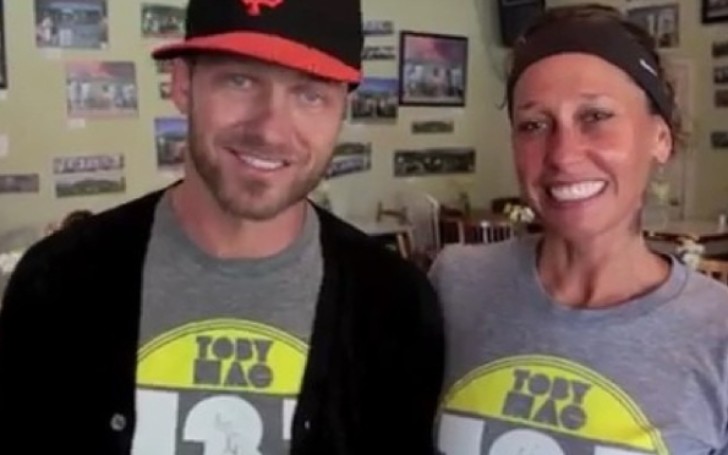 Amanda Levy McKeehan is a Jamaican-American celebrity spouse, primarily recognized as the wife of the veteran Christian rapper, TobyMac. TobyMac’ wife is someone who has been able to totally keep her early life hidden from the general public.

We have found all the information regarding Amanda and TobyMac’s marriage life including when did they tie the knot or how many children do they share?

Find out the answers here and in the meantime, also know about her early life, parents, and more!

Who Is TobyMac Wife Amanda Levy McKeehan? About Her Family and Parents

Born in January 1971, in Jamaica, Amanda is one of four children of Jamaican businessman Robert Levy and his wife, Judy Levy. She practically spent her entire youth on the West Indian island. Her mom and dad raised her in the country alongside her siblings.

Speaking of which, she has two brothers, Christopher and Stephen Levy, and one sister, Wendy Levy. All four of them lived a rather affluent life as their dad was a big shot in the business world. Apart from his business accomplishments, Amanda’s father is also the recipient of the 2014 International Humanitarian Award.

Aside from the above information, not much is known about Amanda’s early life. She is most definitely a college graduate. Besides, her father Robert is an alum of the Harvard Business School.

What is Amanda’s race and nationality?

Talking about her citizenship, she is a Jamaican and became an American citizen in 2007.

Amanda Levy Mckeehan Is Married To TobyMac since 1994

Amanda is most famous as the wife of Christian rapper TobyMac. The endearing couples tied the knot in 1994 after knowing each other for several years. Other intricate details about their wedding are behind closed doors. Still, we can say for sure it was a lavish affair considering how much fortune TobyMac and Amanda’s parents has.

Talking about their relationship origin, the pair has not said anything on the matter. However, we have found that TobyMac has known Amanda’s family since his time as a member of the groundbreaking band, DC Talk. In an interview, Amanda mentioned how her family had an impact on Toby.

Moreover, since he married a woman from Jamaica, he regularly visited the island nation. This also helped him to adopt the local culture and became well versed in the local music as well.

Amanda Once Felt Homesick And Even Decided To Leave The US

Many of you might not know this but in the initial phase of her marriage, Amanda started feeling homesick. This even led to one situation when she even left their house in Brentwood, Tennessee, though for only 10 minutes.

Amanda recalled the moment and opened up about how afterward she sat on a curb. Around half an hour later her hubby pulled up and opened the passenger seat door. Amanda hopped in and started feeling homesick yet again. Then sometimes later, Toby broke his silence and said,

“You need to stop saying that you hate America and that you want to go home,” he said quietly. “Because one day I’m going to say, ‘OK, go then. Go home.”

Amanda Levy Is a Mother of Five Beautiful Children: Their Eldest Son Died of a Drug Overdose

The happy couple is the proud parents of five children, Truett, Moses, Marlee, Leo, and Judah. Their eldest son, Truett, born on September 4, 1998, sadly died on October 23rd, 2019. He died of a drug overdose of fentanyl and amphetamines. Truett was also an up-and-coming rapper who had started his solo career at the age of 21.

Truett’s death devasted the whole family. At the time of his death, he was only 21. Upon his eldest son’s death, TobyMac took a hiatus from his work until 2020.

As we enter this week of Thanksgiving we have something we’d like to share…. Such overwhelming love has surrounded us this last month. We still don’t quite know which end is up but we do KNOW, we are loved. As we mourn our firstborn son, God has poured out His love on us through people. He has loved us through you….your kind acts and words and prayers and thoughts and songs and poems and teachings and gifts and meals and time and expertise and travel have made death bearable. You have been God’s light to us in our darkest days – A comfort to our broken hearts. We have experienced family at every layer and every turn. From the closest to those who have loved from a distance, thank you, thank you a thousand times over. We are grateful for your gentle and compassionate hearts. It is something we will never forget. Community as it should be….the body at it’s best. How God must be pleased! Also- We’ve been encouraging ourselves to stand on this….the place of death is actually where all that we believe is most significant. That God has the power to do what he promised, defeat death and give life to anyone who believes. So from the valley of the shadow of death we pray a flood of thankfulness will rise this week. Thankfulness to a kind God who is not afraid. The Father of the Heavenly lights…who shines most beautifully in the darkness, and gives us everything we need. Toby & Amanda

Amanda along with her husband adopted her other two kids, Moses and Marlee in 2002. The story behind their adoption is quite unique. Ever since their eldest kid was born the pair was all so eager to became a parent yet again but they faced infertility issues.

Amanda and TobyMac’s Story of Adoption

The pair then visited a doctor who suggested doing exploratory surgery on Amand. Initially, the couple said yes to the offer but a few days before the big day, they started having second thoughts. Eventually, the couple concluded they will not undergo the surgery but instead pray for 30 days straight.

Within 10 days of prayer, a woman approached the duo, hoping they would like to adopt a set of twins. Recalling the moment, Amanda told in an interview with Tennessean, “Oh my gosh. We just got hit in the face with the will of God.”

The McKeehans accepted the offer and they immediately called up the birth mother. The pregnant woman had rejected several prospects but thankfully accepted Amanda and her husband. However, when the time came, the woman withdrew from the decision and decided to keep the babies with her. As tragic as it was, the McKeehans accepted fate.

Nevertheless, after a couple of weeks, the agency who was communicating between both the parties contacted them. They told them about how the woman wants to give the babies to the McKeehans.

How Much Is TobyMac Wife Amanda Levy McKeehan’s Net Worth?

Amanda is not involved in a well-publicized profession. Thus her net worth is still under consideration. As for her husband, his total fortune is a staggering $10 million.