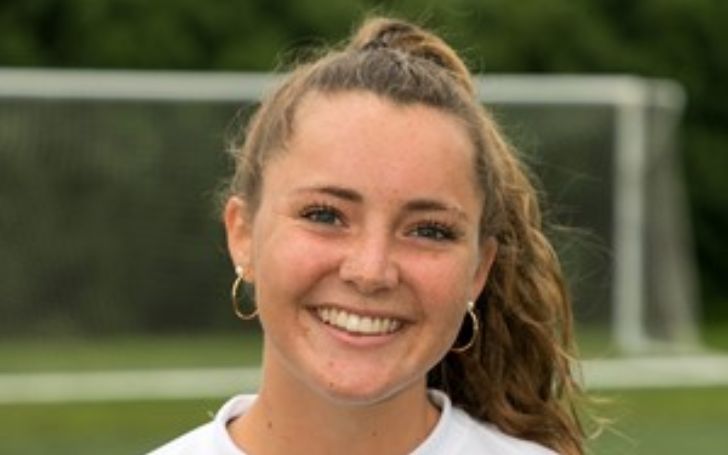 Morgan Kay Beamer is the only daughter of the late Todd Beamer, the late American passenger aboard United Airlines Flight 93, which was hijacked and crashed as part of the September 11 attacks in 2001. Morgan’s father was one of the passengers who attempted to regain control of the aircraft from the hijackers.

The daughter of Todd and his wife Lisa Brosious Beamer, Morgan never met her father, because she was born four months after 9/11, but she too is following in his lead as an athlete. She is a junior at Princeton High School, where she plays lacrosse.

Morgan to some extent resembles her late father, Todd with his dark hair and a little cleft in her chin. She in a way is one of the bridges between Sept. 11 and her generation. Know if she remembers her father all that well, how she is doing herself in the present, the what-about of her mother, Lisa, and more.

Todd and his wife Lisa’s third child, Morgan Kay Beamer was born Wednesday, January 9, 2002, at a New Jersey hospital. As mentioned, it was nearly four months after her father’s death on Sep 11 a year before.

At the time of her birth, she weighed 7 pounds and was 21 inches long. Morgan was her father’s Todd Beamer’s middle name.

Her paternal grandparents David and Peggy are Jacksonville Beach residents. Morgan’s grandfather is a retired businessman who wrote the preface for a 2011 book by Jacksonville minister Gene Youngblood.

Her mother, Lisa Brosious Beamer is a native of Albany, New York who grew up in Shrub Oak, north of New York City. Todd’s daughter’s maternal grandfather Paul was a research physicist, while her grandmother Lorraine Brosious is a Christian counselor.

Morgan has two older brothers, David, and Drew. They were both born before their father’s demise.

Her eldest brother, David who was 3 years of age in Sep 2001 later became a quarterback on the football team at Wheaton College. Morgan’s other brother, Andrew, who was 1 during his father’s death, is also a student at Wheaton College and is on a soccer team as a midfielder.

What Really Happened To Morgan’s Father Todd Beamer On Sep 11, 2001?

Lisa was five months pregnant with Morgan when her husband lost his life in one of the Sept. 11 terror attacks on United Flight 93, which crashed into a Pennsylvania field after he and a band of brave passengers attempted to overpower their hijackers.

Morgan’s father, Todd was an influential man in leading the passengers of the United Flight 93 to fight with the hijackers for control of the jetliner.

Because of that the airplane plummeted into the ground rather than hitting its intended target.

Tragically, however, everyone on board died. Morgan’s father, Todd was a rising star at the software company Oracle. The man kept his family comfortably stable in terms of finances.

Todd had boarded United Flight 93 in Newark New Jersey for a business trip to San Francisco on the morning of September 11, 2001. At the time, the father of two had plans to celebrate the tenth anniversary of his first date with his wife when he got home.

Morgan Kay Beamer’s Father Did Get To Send His Message To His Wife, Lisa

After the hijackers took over the plane, Mr. Beamer saw the dead co-pilot laying in the aisle near the cockpit with his throat slit. The then father of two next reached for the phone on the seatback in front of him and tried to call his wife, but could not get through.

Todd instead got a G.T.E. operator to whom he told what was happening, and she connected the call to F.B.I. agents. The phone remained connected for fifteen minutes while the Oracle employee and several others organized to overtake the terrorists.

Todd and other passengers had been in communication with people via in-plane and cell phones. They had also known two planes had already destroyed the World Trade Center. After a while, Morgan’s dad had the flight attendants boil water and assemble whatever could be used as a weapon. He then told the GTE operator to call his wife and kids and tell them he loved them.

Morgan’s Father Led The Attack Against The Hijackers

Just as he and the rest of the passengers were about to thwart the hijackers, the husband of Lisa cried “Let’s roll!” Beamer led his fellow passengers into the cockpit by using the beverage cart to break through the door.

A brawl ensued, and the people on the plane crashed it into a field near Shanksville, Pa., instead of a Washington, D.C. landmark killing all 44 onboard. The plane, which left Newark had a destination stop at San Francisco.

It was the only carrier on Sep 11 that didn’t take lives on the ground. Authorities later reported the hijackers were steering it toward Washington.

Helping Todd in his heroic act were Tom Burnett, Mark Bingham, Jeremy Glick. Todd in addition to the there men who prevented the attack posthumously received the Arthur Ashe Courage Award in 2002.

A few days after the incident, Lisa recalled “Are you guys ready? Let’s roll!” was an expression her husband often used when the family was leaving for an outing.

Shortly after her father’s death, Morgan’s mother, Lisa Beamer, become a public symbol of courage and strength to a grieving nation as she struggled to keep her family together.

Lisa would write a book telling her husband’s story entitled, “Let’s Roll.” She subsequently also made over 200 media appearances within a year to raise awareness and money for the Todd Beamer Foundation.

To this day, she continues to speak for the children who had suffered trauma in addition to advocating for several other such organizations.

At the time, Lisa and the foundation also sought trademark protection for the phrase “Let’s Roll,” which they feel has become the nation’s battle cry in the war against terrorism.

As for the condolences, singers and musicians, including cellist Yo-Yo Ma, recorded a CD for the foundation, recreating the last moments of Flight 93.

The then-president Bush was also among those who called Lisa to offer congratulations on the birth of Morgan.

Lisa has admitted to having Todd always in her thoughts though she has said she tries not to focus on the events of Sept. 11.

“If I see a picture of the crash site or something like that on TV, obviously I think through it in my head. But I don’t dwell too much on what happened that day,”

Mrs. Beamer said in Jan 2006 to ABC News. Lisa nonetheless admits to missing her dead husband every day. When the housewife turned author gave birth to Morgan, she had her sister-in-law by her side.

Lisa in an interview said Todd had hoped the third child would be a girl, and she named the baby after him — Morgan was his middle name.

Much like Morgan who came home from the hospital to no father, Lisa too had lost her father when she was 15.

“Although pain dissipates over time, it doesn’t go away. I know that many years down the road we’ll still be sad in some ways. But we’ll triumph, too,”

Did She Remarry? Does Lisa Beamer Have A Husband?

While it seems likely Lisa has moved on a fair bit since her husband’s demise, as to whether she has a new husband or not is a whole different dogfight of hunches and conjectures. The reason that makes it harder to construe such a theorem is because of her covert lifestyle besides her activism work and her speaking job.

Morgan’s mom’s last known appearance was at Wheaton College in Sep 2021.  She was an honorable guest who shared her message of hope during the college’s chapel service. It was also the 20th anniversary of the tragic events of 9/11.

Nonetheless, for the time being, the answer to if the Let’s Roll writer is married or not lies exclusively to her family members.

Although Morgan didn’t get to see her father, her mother made sure Todd’s memory for the children remained in their home. The mother of three always kept his photos at eye level for David and Drew.

“Each of the kids, I kind of made a box of mementos for them around all the stuff that’s happened this fall,” Lisa once said explaining how she made her children remember their dad.

“And Morgan has a special big box because she has all her stuff from when she was born that came: a letter from the president, a letter from Mrs. Bush,”

added the ex-wife of Todd Beamer.

Morgan Kay Beamer Parents Were Together From College

Morgan’s parents, Todd and Lisa had been together since college.

Morgan’s late dad was a former baseball player at Fresno State and Wheaton College and also used to teach Sunday school. Her father was also a quarterback on the football team at Wheaton where her mom, Lisa was a cheerleader.

While not much about Morgan’s latest doings are in the publicity, most outlets seem to define her as a former student of Princeton High School, New Jersey where she also played lacrosse.

Although she is virtually a no-name on Instagram, she does appear to have had a handle on other social media such as Facebook. Though the front is mostly inactive these days, it does say a few or two things about the now 20-year-old teenager.

For starters, she is a graduate of Cranbury School, Middlesex County, New Jersey. Todd and his wife, Lisa’s daughter though now apparently is a sophomore in Wheaton College and is also a defensive midfielder for its soccer team.

In 2021, she had 21 appearances and 18 starts, one goal (the game-winner against North Central in the CCIW Tournament championship match).