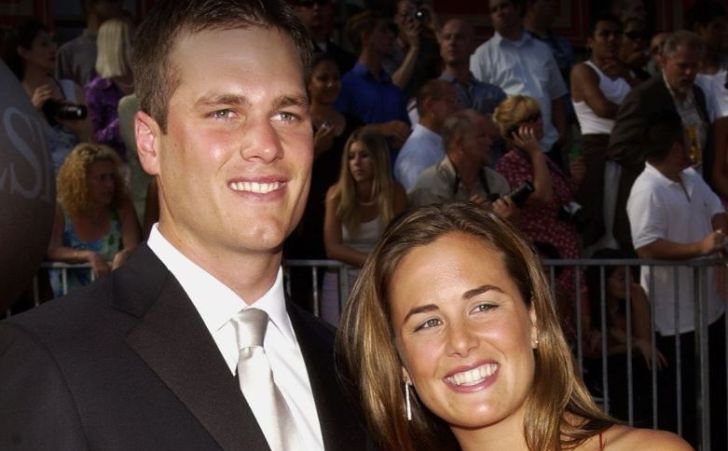 Julie Brady is an ex-collegiate soccer player and former special education teacher who is better known as the elder sister of the NFL superstar, Tom Brady, the Tampa Bay Buccaneers quarterback.  She is also the wife of Kevin Youkilis, a two-time World Series champion with the Boston Red Sox,

Julie’s husband, Youkilis is also an All-Star corner infielder who spent most of his career with the Boston Red Sox; Youkilis retired from baseball in 2014 after a year playing in Japan.

Julie is the youngest of Tom’s three sisters. There are as many stories about the NFL idol’s siblings as his. Julie and the rest of her sisters apparently have proven to be a huge influence on her brother’s career. Read all about them in the assortments below with over and above premise on Julie; her childhood, growing up alongside the Super Bowl champion, her own career, relationship, and more.

The sister of seven-time Superbowl champion Julie Brady was born on August 3, 1974. The now 47 years old Julie is one of the four children of Tom Brady Sr and Galynn Patricia Brady.

Her siblings include Maureen Brady, Nancy Brady, and Tom Brady. They grew up in San Mateo, California.

Each Of Julie Brady’s Siblings

Julie’s eldest sister, Maureen is the oldest child of the Brady bunch. Like her brother, Maureen was also a stand-out athlete and was an All-American softball pitcher at Fresno State in the 1990s.

Following graduation, however, Julie’s eldest sister pursued a career in nursing and now Maureen reportedly works at a local hospital in Bakersfield, California. Julie’s other sister, Nancy, on the other hand, has tended to stay out of the spotlight for years.

She apparently was also an athlete; Nancy played a basketball player and a softball player. Nancy, who is a graduate of Boston University, reportedly works as a Public Health Technical Advisor.

Julie and her sisters reportedly are all every bit as competitive as their brother Tom. The California native once revealed she and her siblings loved sports from a young age.

Both of her sisters were great athletes and teammates, and Tom excelled in football, but he was an outstanding baseball player, too.

“We competed hard against one another but also cheered loudest for each other. No one liked to lose,”

Tom was born in 1977 and Julie in 1974. The reason that they are mistaken for twins is the two siblings happen to share the same birthday on August 3. And so, whenever the ex-England Patriots QB celebrates a birthday, he often jokes that he’s wishing his ‘twin’ sister Julie a happy birthday as well.

Julie Was An Excellent Athlete During High School And College

Much like her sisters and brother, Julie, too, was a standout soccer player who walked on at St. Mary’s before earning a scholarship. The second daughter of Tom Sr. and Galynn Brady, Julie, along with older sister Maureen and younger sister Nancy, was an avid athlete growing up in Northern California.

She played softball and basketball but pursued soccer at St. Mary’s College of California. Julie though later would become a special education teacher.

What Does Julie Do Now?

The six-foot-three-inches tall footballer’s sister, Julie now mostly is a stay-at-home mother with an interest in charitable causes.

In June 2014, she helped organize an event for Youkilis’ charity, Youk’s Kids, to benefit victims of Hurricane Sandy and the Boston Marathon bombings.

Julie Brady Is The Wife Of Kevin Youkilis

Talking a bit about the wedding in the summer of 2012, Julie’s husband, Youkilis said,

It was definitely the greatest off-day of my life. It was a lot of fun, good times. I know there have been some rough times with baseball, but — I don’t usually talk about this — but it’s something good and I wanted to share.

The attendees were immediate family and friends.

Julie and Youkilis’ nuptials included no teammates or extended family, The five-time Superbowl MVP, Tom Brady, and his model wife Gisele Bundchen, however, did make the cut. Youk, in April 2012, promised to have a bigger party to celebrate his nuptials to his new bride.

How Did Julie Meet Her Husband Youkilis?

Kevin and Julie first saw each other in 2004 at a nightclub near Fenway Park known then as Avalon. Youkilis and some of his Red Sox teammates were then hitting the popular nightclub together.

There, Kevin who was then the newly third baseman bumped into the big man in Boston — Tom Brady, the then superstar quarterback for the Patriots. Tom, the father of three, at the time had two of his three older sisters, Nancy and Julie, in tow. Julie eventually caught Youkilis’ eye.

Kevin, however, seeing Tom felt intimidation and never got the courage to ask for Julie’s number. Four years after that, Kevin went on to marry Enza Sambataro. The union though ended in 2010.

Shortly afterward, the ex-New York Yankees player and Julie would finally get to talk to each other the same year. It was six years after that night in 2004 during another random run-in.

They Finally Talked To Each Other During A Fund Raiser

Julie and Youkilis’ second meeting happened in December 2010, when Julie attended a fund-raiser organized by her younger sister, Nancy. Youkilis came to support the night’s emcee, his buddy, and “Glee” actor Mike O’Malley.

Julie remembering the first time they saw each other at a nightclub, with The New York Post in 2013, said,

“Kevin reminded me about the first time we met. And how he was intimidated to ask for my phone number because he didn’t want to step on any toes with Tommy.”

The Brady clan’s middle sister also revealed how Tom and Kevin despite living in the same city didn’t really know one another. She said they nonetheless had mutual respect for each other, as professional athletes.

Upon knowing about Julie and Kevin’s relationship, Tom reportedly told his sister to take it very slowly. Julie had told her brother Tom, ‘I think I may go see him (Youkilis).’

To this Tom would reply, ‘If I were you, I’d move as slow as molasses.’ Julie reports her brother, by that, meant never move at all. Kevin and Julie officially began their relationship in 2011. They dated in private for over a year before marrying in 2012.

In 2013, Julie told the YES Network that she and Kevin indeed took it really slow since he at the time was living in Boston and she was in California. They first became really good friends because all they had was a long distance.

Julie in an interview said it was Youkilis’ easy sense of humor and their shared values and expectations that made her fall for the Ohio native.

“Kevin made me laugh, and that is why I fell in love with him. We were really comfortable together and could talk for a long time.”

They initially went through a long-distance relationship. Youkilis and Julie Brady got finally engaged in 2012 and married that same year in a small ceremony on an off day. The pair tied the knot at their home in Weston, a suburb of Boston.

Julie’s husband with the local radio station WAAF said he and his wife have planned to do a bigger ceremony at some point. Ms. Brady and Youkilis have two sons together, Zachary and Jeremy.

Tom’s sister also has a daughter, Jordan from a previous relationship. It though is unclear who her ex-husband/partner is. Julie now reportedly helps her spouse, Kevin run a brewpub, Loma Brewing Company, in Los Gatos, California, where the couple lives with their three children.

Youkilis co-owns the brewery with his brother, Scott Youkilis, who has run multiple restaurants in the San Francisco area.

Is Julie As Rich As Her Brother, Tom Brady; What Is Her Net Worth?

While Tom is undeniably one of the richest athletes the generation has seen, the financial footings of his lesser-known family members are somewhat unrefined interrogatives.

Although Julie’s personal net worth might very well never get mentioned in any standard write-up, chances are it is always less likely that she is anywhere near as rich as her brother Tom. The 2000 NFL draftee has an estimated net worth of over $240million.

Further, anyone who is clearly a millionaire from her family domain is her husband, Youkilis himself. The retired MLB player reportedly possesses a wealth of over $25million.

Baseball-Reference reports Brady’s spouse Youkilis earned over $56 million in the majors. Also since retiring after an injury-plagued 2013 season with Mariano Rivera and the rival Yankees, Youkilis now apparently brings in quite a lot from his Loma Brewing Company.

In any case, Julie could also be a very well-off woman since she is also a co-partner in her husband’s brewery business.

Does Julie Have Social Media Accounts?

In addition to her net worth, something that is missing in the case of Julie Brady is her presence on domains like Facebook, Instagram, or Twitter. The 47 years old unlike her husband who is justly in action on Instagram is passably a non-person on social media.

Julie nonetheless occasionally resurfaces on her husband, Kevin’s Instagram. She likewise also doesn’t get missed when her footballer brother has to wish her on her birthday.