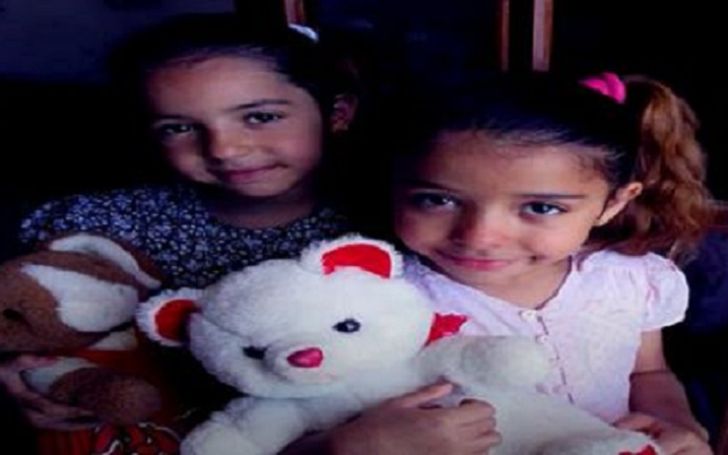 Victoria Jordan has been in the spotlight as the twin daughter of one of the greatest basketball players of all-time Michael Jordan. Her father (better known as MJ) spent a significant part of his career playing with the Chicago Bulls and also won six championships with the team. On the other hand, Victoria’s mother Yvette Prieto is a model.

Although Jordan is one of the leading faces in the media, the iconic basketball player is quite confidential when it comes to his twin daughters. The ultra-secret dad has yet to allow his twins to make a public appearance, neither has shared a single photo of themselves on any social media handles.

Thus, here we are to find out some unexplored facts about Michael Jordan’s twin daughter Victoria’s life! Let’s take a look!

How Old is Michael Jordan’s Twin Victoria? Know About Her Identical Sister and Early Life

Victoria and her twin sister Ysabel Jordan are aged 7 as of 2021. As for their birthplace, Jordan’s identical daughters were born in West Palm Beach, Florida. At the time, Jordan’s spokeswoman Estee Portnoy said to The Associated Press,

“Yvette Jordan and the babies are doing well and the family is overjoyed at their arrival.”

Besides, Victoria’s parents announced their pregnancy back in November 2013 but they didn’t reveal they were expecting twins.

Ever since Jordan became the father of twins, the basketball legend has successfully kept his daughters’ life out of the spotlight.

Victoria belongs to American nationality. Talking about her ethnicity, the star kid has a mixed ethnical background as her father is an Afro-American while her mother is of Cuban descent.

How long have Victoria Jordan’s parents been married? Their Extravagant Wedding

Although Victoria’s parents Michael and Yvette are from two different ethnic backgrounds, it never put any strain on their married life, instead, made them one of the strongest interracial lovers. They have been happily married for over eight years.

Besides, the two came across at a Miami nightclub in 2007. They were instantly smitten and dated for over a couple of years before they engaged in 2011. Jordan popped the question to his then-girlfriend during the Christmas holidays.

As for their marriage, the two wed on April 27th, 2013, at a laving wedding ceremony held at Bethesda-by-the-Sea Episcopal Church. Sources believe, Jordan spent about $10 million on his wedding party. The extravagant event was attended by about 300 guests including Tiger Woods, Usher, Patrick Ewing, Spike Lee, and more.

A source close to the couple told Us,

“They are so in love. The warmth and the love was just overflowing. It was a wonderful day and will be a wonderful marriage!”

Furthermore, their reception party was held in a large tent at Bear’s Club in Jupiter, Fla. The loving duo has since been leading a blissful married life.

It was Victoria’s mother Yvette’s first marriage but her basketball father was married to Juanita Vanoy in the past. The former flames tied the knot back in Sept 1989. The two were together for around twelve years as a married couple before they divorced in Jan 2002. And Jordan’s ex-wife reportedly received $168 million in a divorce settlement, making it the largest celebrity divorce settlement at the time.

In addition to her twin sister, Victoria also has three half-siblings, a sister named Jasmine as well as two brothers Jeffy and Marcus. Both of her half-bros are former basketball players. Marcus used to play for UCF Knights men’s basketball team, whereas, Jeffy played for the University of Illinois. Together, the Jordan-brother-duo runs a philanthropic foundation called Heir Jordan.

Victoria Jordan’s Childhood: Where does the star kid live?

Being the daughter of a billionaire father, it is evident that Victoria and her twin sister Ysabel have quite a lavish upbringing. Her wealthiest father has numerous multi-million houses all around the United States. And Jordan also put some of the mansions on the market.

Back in 2012, the former Chicago Bulls star listed his mansion in the Highland Park suburb of Chicago on the market. The house that has 32,000 square feet of space is yet to sell out and is still on the market with a $14.8 million selling price. Moreover, it has nine bedrooms and nineteen bathrooms.

Similarly, back in 2019, Jordan put another house that is nestled in Park City, Utah on the market for $7.5 million. Besides, the basketball star owns three other mansions; one is in North Carolina, another is in Cornelius, North Carolina, and the last one is located in Jupiter, Florida. Michael bought the latter for $4.8 million in 2013.

As we have mentioned earlier that Jordan, along with his illustrious basketball career, is also quite successful in keeping his family details too private. Further, the notoriously private father has never made a public appearance with his twin daughters, nor allowed anyone to take an official picture of the girls.

Back in 2021, the acclaimed TV documentary The Last Dance was released. The series that also won the Emmy Award chronicles the glorious career of Michael Jordan and his family life. But there are reports that some secret family scenes are not recorded in the story. The director of the show Jason Hehir himself said The Athletic that they had cut off scenes deliberately,

“I wasn’t interested in the opinion of any wife or kids in this. We had the storytellers we wanted and I felt like we had the story covered from every angle.”

So it further clarifies how protective and secretive Michael is when it comes to his family details.

Know Something About Victoria Jordan’s Mother

Her mother Yvette Prieto is a model by profession. Born and raised in Florida, Prieto previously worked for the fashion designer Alexander Wang. She also popped up in the documentary, Cuba: An Island Apart. But, Yvette became more noticeable only after her marriage with Jordan.

What is Victoria Jordan’s Net Worth?

The 7-year-old Victoria is still at primary school. Neither the star kid has yet to make a move in any kind of profession. So, there is no estimated amount of net worth that Jordan’s twin girl has as of 2021.

In the meantime, Victoria’s dad’s fortune is $1.6 billion, whereas, her mom has an estimated net worth of $5 million. Jordan has earned massive wealth from his basketball career and business endeavors.