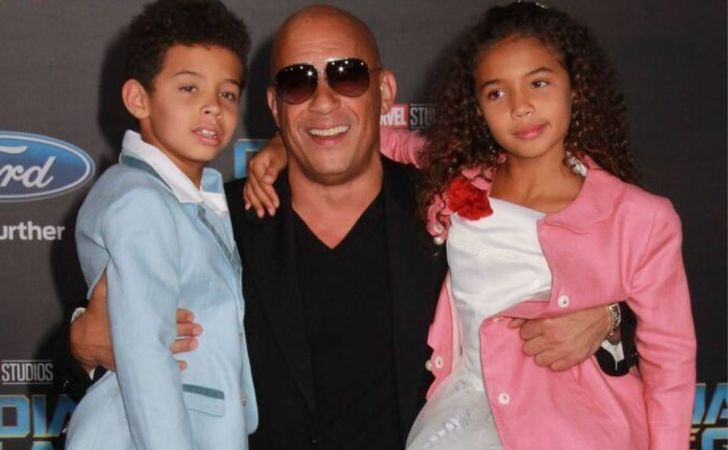 Hania Riley Sinclair is the oldest daughter of Vin Diesel and Paloma Jiménez. Like her father, she is also an actor and is known for her work in Fast & Furious Spy Racers, and many others.

Born in 2008, Hania is just around 13 years of age and is already hugely famous. And the credit mostly goes to her famous parents. Well, in this article, we are going to talk in detail about her parent, career, & much more.

Who Is Hania Riley Sinclair?

The daughter of one of the most successful celebrities, Hania Riley Sinclair is an actress by profession. She was born on April 2, 2008, in the United States, and she is aged 14 years in 2022. She is the daughter of successful Fast & Furious actor Vin Diesel and his long-term partner Paloma Jimenez.

The star kid is currently in school and is reportedly good at studies. But unfortunately, she has not revealed much about her school or other academic details.

Besides, as a daughter of such successful stars, Sinclair had a lavish upbringing and she has also already gained immense exposure.

While Hania is the oldest kid in the family, she also has two other siblings, a brother Vincent Sinclair and a sister Pauline Sinclair. Vincent is the middle child and was born in 2010. Likewise, Pauline is the youngest among all and was born in 2015.

Both her siblings are still very young and are busy with their studies. They share a great relationship together and often make public appearances together with their parents.

Hania Riley Sinclair Is An Actress

It looks like Hania is pretty much influenced by her father’s professional career. At such a young age, she is very keen on acting and has already made her entry into the entertainment industry.

She made her debut in 2019, appearing in the TV series named Fast & Furious Spy Racers. In the series, she appeared in 6 episodes from 2019 to 2021. The series also stars actors including Tyler Posey, Charlet Takahashi Chung, & Jorge Diaz among others.

Her Parents Are Not Married Yet

Hania’s parents Vin and Paloma can be said as one of the most successful couples in the entertainment industry. They began dating in 2007 and they completed 15 years of togetherness in 2022. The most interesting thing is that they are not married yet.

Despite not being married, they share a great relationship. They are pretty much well-bonded and their compatibility seems to be only growing stronger every day. But despite such bonding, Vin was accused of cheating on Paloma back in 2016. But all the allegation was eventually proved to be untrue.

In a public statement, Vin clarified all the claims stating,

Now that thing seems cool between the two, we hope we will get to see them as husband and wife soon.

Hania’s Father Is An Actor

As we mentioned earlier, Hania Riley Sinclair’s parents are successful professionals. Talking about her father Vin, is a successful actor, writer, & producer. He made his entry into the film industry as an actor in 1990 appearing in the film, Awakenings.

Some of his other successful works include The Pacifier, Fast & Furious franchise, Guardians of the Galaxy, and many others.

Her Mother Is A Successful Model

Talking about Hania’s mother, she is a successful model. She has worked for numerous modeling agencies like Kyoto Booking Models, ID Model Management, Two Management, Look Models, and several others.

Further, she was featured on the cover of the Mexican edition of Maxim Magazine in 2005. Not only this, but she has also walked the ramp for top-notch designers like Alberto Rodriguez, Carlo Demichelis, Hector Terrones, Guillermo Vargas, and Roberto Villareal.

Vin Diesel is feels proud to be a dad

Like many, whose source of pride comes from their kids, Vin falls in the same boat as well. He believes his kids are a blessing in his life and enjoys having them around.

In an interview with PEOPLE magazine, the actor said,

“My pride in my kids is through the roof. Oh my God, I’m proud of them all the time. The last time was when Pauline said, ‘Merry Christmas everyone, from the Diesels,’ and she put it all together in one sentence. It was a big moment.”

“My kids move me to tears all the time. My daughter Similce said to me a couple of weeks ago, ‘Daddy, I know what song should [play] at every funeral.’ I said, ‘What is it?’ And she said, ‘See You Again.’”

What Is Hania Riley Sinclair Net Worth?

Though Hania has made some money from TV series, her money is currently managed by her father as she is still very young. She has not revealed the salary she received for her role in the series. However, her father on the other hand has a net worth of $225 million as of 2022.