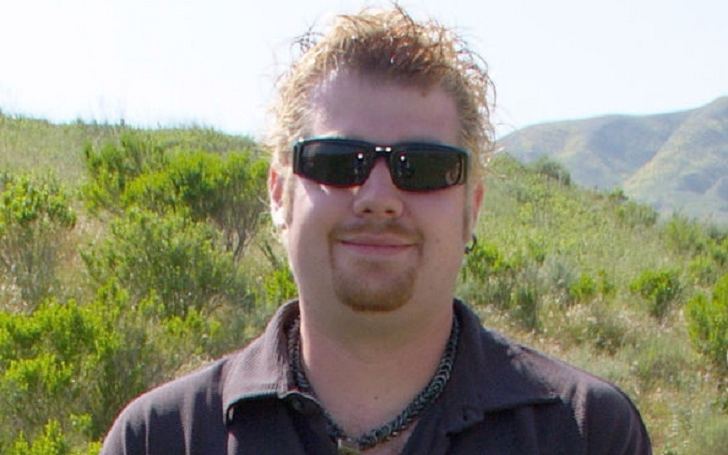 Neil Jason Wharton is the only son of Vince Neil, the lead vocalist of the heavy metal band, Mötley Crüe. His dad has also tried his hands in a few other fields like acting and business.

As the son of one of the legendary artists, is Neil also following in his father’s footsteps? Sources reported that Wharton was raised by his single mom after his parents’ break up. So, who is Neil Jason Wharton’s mother?

Meanwhile, Neil is a dad of two adorable children. Today, find out about his low-key marriage with his longtime wife and many other details including his early life, net worth, and more!

Born on October 3, 1978, in the United States, Neil Jason Wharton is the son of his father, Vince Neil, and mother, Tami. He is an American as per his nationality and belongs to the Caucasian ethnicity.

Talking about his education, Neil graduated from college with a degree in hotel management.

Neil Jason Wharton Career: He is a rock star just like his father

Following his graduation, Wharton went to Nevada and started working in Laughlin, at the front desk of Harrah’s Casinos. He worked there for a while before jumping into the music world. He had always been interested in rock music from an early age.

Neil is now the frontman of his own Crue tribute band, Rock ‘n’ Roll Junkkies. The band includes Steven Talbott, a guitarist, Matty Vincent, a bassist, and Patrick Labuda, a drummer.

Here is a rare video of Rock ‘n’ Roll Junkkies,

The group has already performed in several places across the United States. Back in 2005, they played at the Crue Fest in Los Angeles and Cleveland. The show aimed to benefit the Skylar Neil Memorial Foundation.

Additionally, Neil Wharton also enjoys a guitar and a bass.

In 2012, twelve people were killed in the Aurora theater shooting. Rock-And-Roll Junkies performed along with seven other local bands at the Grizzly Rock in Lakewood to raise funds for the victim families.

One of his wife’s friends Rebecca Wingo was also the victim of the tragic incident. Rebecca was a single mom and has two beautiful little girls, five and nine at that time. Neil told CBS Denver,

“Every penny that we raise, everything that we make goes directly to the victims’ families and that’s the least that we could do.”

They named the event, Rockfest for Aurora.

How did his parents Temi and Vince meet? They were high school sweethearts

While nobody has any ideas about how his parents first met, Neil himself recalled their first meeting in an exclusive interview with Ozmail.

According to him, his father Vince came across Temi in 1978. He was fronting Rockandi at the time. The former love birds were students at the same school. They caught each other’s eyes when Vince broke his leg while skating at the pipeline in Glendora. Temi later came out to help him and Neil smiled at her. From that moment, there was a connection between the two.

“I’ve heard so many different ones. The one that stands out the most would have to be when my Dad broke his leg, or something, skateboarding. He used to skate at the pipeline in Glendora. I guess he was coming out of the boys room or something and Mum looked at him and she kind of felt sorry for him. She wanted to help him with his books and he smiled at her. That’s what caught her eye.”

Soon after that, the then-under twenty couple started dating and also welcomed their first child, the same year they first met.

Neil Jason Wharton lived with his mother After His Parents Split

Shortly after the birth of their child, Vince and Temi also parted ways. According to Neil, they dated for a year and a half, or two years before their split. He initially used to live with both of his parents.

But due to his dad’s hectic schedule, Neil started living with his mother.

Neil Wharton has two half-siblings; one died at the age of four

Neil has two younger half-sisters; Elizabeth Ashley Wharton (born on October 29, 1983) from Vince’s relationship with his first wife Beth Lynn. They married in 1981 and divorced after four years of their marital relationship in 1985.

After their separation, Neil went on to marry a mud wrestler and fashion model Sharise Ruddell in April 1987. The two welcomed their daughter Skylar Lynnae Neil on 26th March 1991. Unfortunately, Skylar died of cancer in 1995.

Following her untimely demise, her father founded the Skylar Neil Memorial Foundation in her memory. It focuses on the research on pediatric cancer, leukemia, and AIDS. The non-profit organization has raised more than $1 million to date.

In 1993, Neil appeared in Can’t Have Your Cake along with former actress Pamela Anderson. He played a young Vince Neil on the video. He said that “Anderson is one the nicest, sweetest people I have ever met in my whole entire life.”

He revealed that Pamela helped him a lot at the time,

“She was great to work with. She helped me out a lot because I didn’t really know what I was doing.”

Who is Neil Jason Wharton’s Wife? Has Two Children With Her

Wharton is married to Marie Wharton for a long time now. The two remain quite secretive about their love life and are yet to make a single public appearance together.

Besides, they are proud parents of two children. They welcomed their first child, a son Trace in 2011. Their second child, a daughter Hailee Marie was born in Jan 2015. Their grandfather Vince announced the big news on Twitter with the caption,

Back in early 2016, Wharton needed some medical help for which a few of his friends also hosted a Facebook fundraiser.

Besides, in an interview with Ozmail, Neil mentioned that he once had a crush on a girl named, Joelle. He met the lady while they both were on the video Can’t Have Your Cake.

Net Worth of Neil Jason Wharton

He has a wealth of $5 million as of 2022. On the other hand, his father’s estimated net worth is $50 million. He has earned the majority of his fortune from his music and acting career.

He appeared in on-screen projects like Police Academy 6: City Under Siege, The Adventures of Ford Fairlane, and more. Vince skated with professional ice skater Jennifer Wester on ABC’s Skating with the Stars in 2010.

Other Hidden Facts of Neil