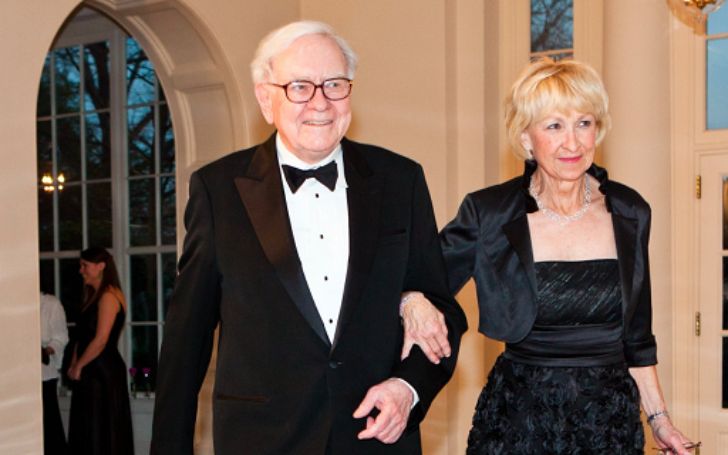 Astrid Menks is the wife of a business tycoon, Warren Buffett, the current chairman and CEO of Berkshire Hathaway, one of the most successful investors in the world who has a net worth of over $117 billion as of March 2022, making him the world’s sixth-wealthiest person.

Menks who is of East European origin has been with Buffett since the late ’70s. She, though, is quite a subject that has barely a few or two things to tell about. In fact, Astrid might top the list if it is about the secret wives of the billionaires.

Nonetheless down below lies some pointers that might be worth checking about Astrid Menks. Scroll all through her early stories (wikis), how she came to be Mrs. Buffett, and beyond.

Astrid Menks Is A Latvian; Was A Waitress In Nebraska

Astrid is originally from Latvia. On a different note, however, the longtime partner of Berkshire Hathaway CEO has set loose very little information be it in regards to her family origin, birth date, and so forth. There however are some exposes that claim the Menks was born in Jan 1946.

Buffett once told how his existing wife, Menks has always preferred privacy so much so that she didn’t even want to be a part of her husband’s documentary, Becoming Warren Buffett 2017.

As for her current age, Astrid is believed to be in her mid-70s as such she is 16 years younger than her billionaire significant other.

She used to work as a waitress at The French Cafe cocktail bar in Omaha, Nebraska. It is the same place where Buffett’s late wife, Susan used to sing.

Astrid Menks Was Friends With Her Husband’s First Wife

By all accounts, Astrid and Warren’s first wife Susan were the best of friends. There are several pictures of the women getting out together in public on many occasions, sometimes even holding hands. Additionally, their mothers were also each other’s pals.

What Does Menks Do For A Living?

As per the reports, Astrid’s a woman who has always had a keen interest in antiques. She is a blonde lady with a sharp sense of style and people often know her as the one searching Nebraska’s shops for hidden bargains.

In the meantime, she has taken on a handful of local causes including support for Omaha’s Henry Doorly zoo, an institution strong in conservation that discovered 11 new species of lemurs. She reportedly is around the town, very much a bargain hunter and a recycler.

Multiple outlets have reported like her husband, Astrid places a strong value on frugality and often shops in thrift shops rather than luxury department stores and boutiques.

Where Did Astrid Meet Her Husband Warren Buffett?

Menks first met her spouse Buffett in the mid-1970s when the latter’s first wife resumed her career as a nightclub singer by taking a job at the French Café, an upscale Omaha nightspot. Astrid was working there as a waitress, serving a faux-French menu with dishes such as “le surf and turf”.

Amidst the time, Warren’s ex-wife Susan had left him in 1977 after a quarter of a century of marriage. She had chosen to move to San Francisco to pursue her career. Some insiders report the other reason she left the Omaha-born businessman was because of the attention her increasingly famous husband was receiving.

Warren had married his first wife Susan in 1952. Their separation, however, was only partial. The couple continued to see each other regularly. They would socialize and work together frequently.

Even after the separation, Susan asked several friends in Omaha to look after her husband – including Menks, who began discreetly delivering him homemade soup and moved in with him a year later. The late activist introduced the Columbia University graduate to Astrid Menks explaining,

“I called Astrid. I said, Astrid, will you take Warren, make him some soup, go over there and look after him?”

Speaking on her husband’s behalf regarding Menks, Susan said, “He appreciates it, and I appreciate it,” said Susie. “She’s a wonderful person.”

Astrid Menks, Warren Buffett, And His Late Wife Susan Thompson All Had An Unconventional Relationship

The couple, Menks and Buffett had a rather unconventional relationship in the presence of Susan.

The Guardian reports the two women proceeded to “share” the billionaire. As his wealth grew, Susan took on the task of managing her husband’s charitable foundation.

Menks would pack Buffett’s luggage so that he could see Susan, apparently without a trace of jealousy, and would sometimes appear beside her smiling, talking, and even holding hands. In his book The Making of an American Capitalist, the author Roger Lowenstein, explaining the dynamic of Menks, Warren, and Susan writes,

“From the day she moved in, Astrid knew that Buffett did not envision remarrying and that he was still attached to his wife. She made a home for him, yet she would see him off with neatly laundered shirts when he left town to be with Susie.”

The arrangement between the three appeared to work well. The trio even sent out Christmas cards signed “Warren, Susie, and Astrid.” Some argue that it was an open marriage. When talking with Time Magazine, Warren once said, “Susan put me together, and Astrid keeps me together.”

On the other hand, Warren and Astrid’s engagement ran for four decades until their marriage in 2006. This was two years after the death of Susan after a lengthy battle with cancer.

Astrid Menks And Buffett Had An Inexpensive Wedding

The Latvian-American woman, Astrid, and her billionaire man’s 15-minute wedding ceremony had a judge, Patricia Lamberty as their minister. The only witnesses were Buffett’s daughter and Menks’s sister, and there were no paparazzi. It was a typically low-key affair for Buffett, who avoids glamour at all costs. Astrid and Buffett married in Aug 2006; it was also the latter’s 76th birthday.

Despite Warren being a billionaire Astrid and his marriage happened in quite a frugal manner. Buffett apparently sported an everyday business suit, the ring was a discount purchase through his own company and the reception was a meal at the Bonefish Grill, an American wide seafood chain.

The wedding took place at Buffett’s white stucco house in the prairie city of Omaha. She and her Philanthropist husband still live in a home that Buffett bought for $31,500 in 1958.

Astrid Menks Husband Is Undoubtedly Rich; What Is Her Own Net Worth?

While Forbes estimates Menks’ husband, Buffett has an estimated net worth of over $114 billion, no such estimation has been concluded for the Latvian’s net worth.

Menks’ partner first reached billionaire status in 1985 and ever since has become a model for his billionaire peers including Microsoft founder, Bill Gates, the former richest person in the world.

From purchasing his first shares of stock at age 11 to declaring a promise to donate more than 90% of his total fortune, Astrid’s husband has sure seen a lot of zeros in his life. There literally is no bickering for the statement – Buffett is hyper-successful in terms of wealth.

And although the akin know-how is conversely a teaser for Astrid, it wouldn’t be an undisputed overstatement to say she is rich in at least some magnitude. For all that her relationship with the investor pioneer, Astrid could very well have more than a substantial fortune for her own.

Peter is actually the girls’ step-father which he became after marrying the identical twins’ mother Mary Buffett.

However, when, in 2006, Nicole appeared in Jamie Johnson’s documentary, The One Percent, about rich kids, she said that money seemed to be important to her step-grandfather, Warren Buffett. Buffett later found this quite offensive and consequently cut Erica and her twin sister (who had not appeared in the film) out of his life; personally and financially.