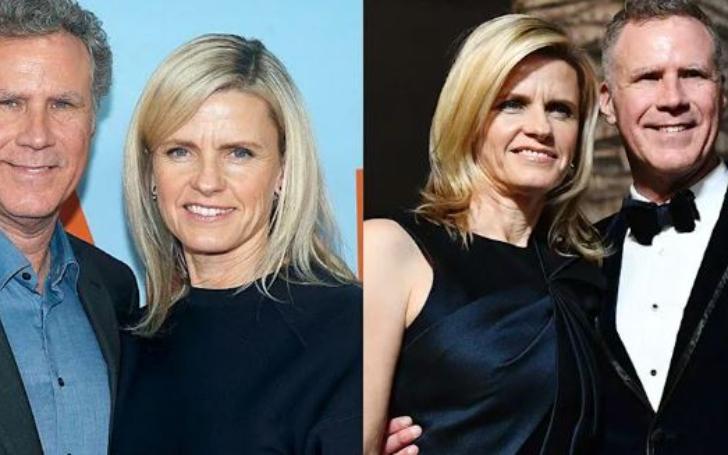 Viveca Paulin is a Swedish-American actress who is famous as Will Ferrell‘s wife. The couple has been in a marital relationship for a long time. Because of their long-term relationship, people are also curious to know about how it all began between the two.

Well, to put it plainly, the relationship started off good, the proposal to marry, however, is a different story. Aside from her private life, not much is known about this celebrity spouse’s early life and we’re here to find out.

Let’s talk in detail about Viveca’s life and find some interesting facts about her!

Viveca Paulin was born and raised in Sweden:

Viveca Birgitta Paulin was born on April 24th, 1969, in Gothenburg, Sweden. She spent a couple of years of her childhood in the district of Askim, 10-km South-West of the city center. However, the details about her parents and other family details are yet to be revealed.

She later moved to Boston, the United States. This is where she finished up her formal education. As for her college, she studied at Pomona College from where she graduated with a B.A. in Arts & History in 1991. The college which is situated in Claremont, California is a Liberal Arts college. During her time in the college, she was a member of the college’s soccer team.

We’re sure many of you might be curious to know the meaning behind her name. Her name Viveca is a name of Scandinavian origin which means ‘alive, life, and place of refuge.’

Viveca Paulin is a renowned auctioneer

Many of you might not know this but Viveca is not only an actress but also an auctioneer. Yes, she is a legit auctioneer. She generally picks up the gavel for arts-related stuff.

She learned how to conduct auctions at the Butterfield & Butterfield. She usually works for the Los Angeles Modern Auctions. Moreover, she is also a trustee at the Los Angeles County Museum of Art. In addition, she also works in the Hammer Museum as one of the board of overseers.

Besides, a fun fact, before Will got his big break in SNL, he was working together with Viveca at the Bonham’s Auction House. His primary job was to type appraisals off of Dictaphones.

Apart from her work as an auctioneer, she has also tried her hands in the entertainment world, though her roles are generally small. She made her debut in the 1997 movie, Money Talks. In the series, she plays the role of an auctioneer.

She also worked together with her spouse in the movie, A Night at the Roxbury. Apart from the stated movies, she also lent her voice in the animated movie, Ralph Breaks the Internet.

After finding out about her professional life, it wouldn’t be an understatement to say she is a multi-talented individual.

Besides, as for her husband, Ferrell grabbed tremendous attention following his appearance on Saturday Night Live. Some other hits the actor appeared in are The Other Guys, Talladega Nights and Step Brothers as well.

Viveca Paulin and Will Ferrell’ Relationship

It was back in 1995 in an acting class when they came across each other for the first time. At first, they were quite smitten by each other, however, later on, the couple thought they are better off as friends.

At the time, Will was a struggling actor who was having difficulty making ends meet. It was his close friend Viveca who helped him pay his rent sometimes and also supported his acting dream. It was her who helped him find the typing gig at the auction house.

Then in 1997 Will got a job at Saturday Night Live for which he had to move from California to New York City. Despite the distance, the duo remained cordial with each other. They used to speak for hours on the telephone regardless of the fact that Will was in a relationship. Yes, he had a girlfriend back but as the day passed by, he started falling in love with Viveca.

Some times after they officially started dating, Will decided it was the time that he pops the big question. He then took Viveca to the same beach where they had gone for their first date.

Even though Will was quite positive everything will go as planned, Paulin dropped the bombshell when she complained about the location. So the comedian had taken her to the beach at night time and like any normal person, Viveca said, ‘The beach is creepy at night.’

He tried to control the situation and told her, “Shut up, this is supposed to be really romantic.” But all jokes aside, everything went according to the plan and they got engaged. Subsequently, they exchanged vows on August 12th, 2000.

The couple is a parent of three children

All three of the pair’s kids are growing up pretty well. In fact, the older ones are already showing promise in the comedy show. In an interview with the PARADE magazine, the comedian told that his sons are also funny in their own ways.

He told about a funny incident related to his oldest son Magnus. He said,

They’re funny in their own ways. I have a freshman in high school and he’s very subtly funny. Last year for his yearbook photo, he borrowed another kid’s glasses. He doesn’t wear glasses. There he is with this very serious look with glasses on. Like ‘Magnus, that is so subversive and funny. Totally my sense of humor.’ He’s like, ‘Am I in trouble?’ Like, ‘No, you’ve got to do it every year! Fantastic!”

Regardless, his sons aren’t a big fan of his SNL work. In the same interview, Ferrell said his son often watched his SNL skits during sleepovers but somehow they found it embarrassing to see their dad enact in odd ways.

Viveca Paulin Net Worth: She and her husband have started a scholarship

She lived a fairly decent life during her childhood. As an auctioneer, she also earns a decent amount of money. Her net worth can be put somewhere around $450,000. Meanwhile, her hubby is worth $160 million. Moreover, the pair has also invested in several art pieces which are worth a lot of money.

Besides, the lovebirds also give out a lot. They have donated money to many charitable groups including the Cancer for College foundation which grants college scholarships to cancer survivors. Furthermore, they also started the Viveca Paulin and Will Ferrell Scholarship which gives scholarships to student-athletes coming to USC.