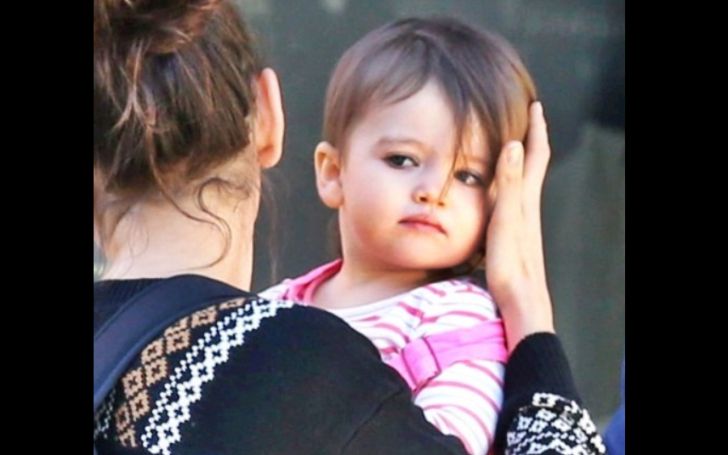 Wyatt Isabelle Kutcher is the elder daughter of the two most famed celebrities in Hollywood, Ashton Kutcher and Mila Kunis. This 7-year-old’s parents had their first encounter in the 1998 sitcom, The ’70s Show, as Kelso and Jackie.

Did Kutcher and Kunis hit it off with each other since their first meeting? Well, no. Wyatt’s parents were in different relationships in the beginning – they reunited years after their show ended and that’s only when everything started to fall into place. Today, along with Wyatt Isabelle Kutcher, they also have a son, Dimitri Portwood Kutcher.

So, who is Wyatt Isabelle Kutcher? We know that she is a star kid, but let’s not just stop here. In this article, we will get to know everything that is to know about Ashton Kutcher’s daughter Wyatt. How did her parents come up with this name? Does she really speak 3 different languages? Let’s find out together!

Wyatt Isabelle was born on October 1st, 2014 in Los Angeles, California to mother Mila Kunis and father Ashton Kutcher. This 7-year-old comes from a Jewish, Bohemian, Irish, and Swiss-German background.

Wyatt’s mom, Mila Kunis, is originally from Ukraine and is Jewish. On the other hand, her dad, Ashton Kutcher, is an American citizen with part Bohemian (Czech), part Irish, and German background. Wyatt sure seems to be fulfilled with all the different qualities that these ethnicities possess.

Since her birth, Wyatt’s celebrity parents have tried hard to keep her out of the public eye. The couple is very private when it comes to sharing the kid’s photos on their social media. During Kutcher’s appearance on The Thrive Global Podcast, he stated that he and his wife have a private account to post pictures of both their kids only for their grandparents to see.

It’s disappointing that we do not get to see the lovely and cute pictures of this little girl, but we need to respect her parent’s decision as well. The kids should have a normal life, away from the hassle of the limelight.

Wyatt Isabelle Kutcher is a quite unique name. So, how did her parents exactly come up with this? It’s strange, but at a Laker’s Game.

Kutcher and Kunis had picked out a name long before the star couple got pregnant. However, when it actually was the time to name their kid, they felt that the preexisting name will not suit their daughter. In Kunis’s words, “the energy that they were feeling” wasn’t right. Thus, they decided on a different name.

The 44-year-old actor, Kutcher, came up with Wyatt’s name at a Laker’s Game with his wife. According to a statement released by him, he was stating everything and anything passing his eyes, and that’s when the name, “Wyatt” came through. Both of them felt, “this is it” and hence, renamed their daughter, Wyatt Isabelle Kutcher.

Wyatt’s middle name, however, is traditional. The couple named her after Kuni’s grandfather.

Wyatt Isabelle Kutcher is a Smart Girl Fluent in 3 Languages

According to a statement released by Ashton Kutcher, his eldest kid, Wyatt, can speak and understand three different languages. He said,

“My daughter is like two and a half, she speaks three languages, she’s got like Russian, Spanish and English. She actually understands and speaks them”

Wyatt surely is a smart girl.

In the same interview, Kutcher also talked about his 5-year-old son, Dimitri; called him “pterodactyl”. Apparently, the kid sounds and behaves like that creature. When it was time for both of his kids to utter their first words, Wyatt called him, “papa, papa”, while Dimitri went, “bahhhh”. This was a hilarious incident that Kutcher shared with the world.

The love story of the celebrated stars, Ashton Kutcher and Mila Kunis seems like a Hollywood Fairytale. They went from an on-screen couple to husband and wife a decade later.

Wyatt’s parents played the roles of Jackie (Kunis) and Kelso (Kutcher) in the 1998 sitcom, The ’70s Show. However, this ‘on again off again’ on-screen couple did not date in real life until years after the show ended in 2006. They were even in separate relationships before dating and marrying each other.

The Two and a Half Men star, Ashton was married to Demi Moore after he left the show in 2005, while Kunis was in a long-term relationship with Macaulay Culkin from 2002. Both of these relationships did not last too long; Kunis broke up in January of 2011, and Kutcher got divorced in November of the same year.

Following this, in 2012, Kutcher and Kunis reconnected at the 69th Golden Globe Awards. Initially, these two kept things out of the radar and dated casually, but moved closer as time went by. Moreover, they got married on July 4th, 2015 after almost a decade of knowing each other. Today, the couple is blessed with two wonderful children – a daughter, Wyatt, and a son, Dimitri Portwood Kutcher.

By now, it is obvious that Wyatt’s parents are two famous personalities in Hollywood. Both Kutcher and Kunis started their career in the sitcom, The ’70s Show, and rose to fame with time.

Wyatt’s mother, Mila Kunis, an Ukrain-born American Actress, made her appearance for the first time as Jackie Burkhart on television. She is also the voice of Meg Griffin in Family Guy since 1999. Similarly, Kunis made a debut in the film, Forgetting Sarah Marshall, as Rachel.

Since then, she has won the hearts of millions of people. Recognizing her talent in acting, Kunis has been awarded the Marcello Mastroianni Award for Best Young Actress. She has also been nominated for the SAG Awards and Golden Globe Awards.

On the other hand, Wyatt Isabelle’s father, The Ranch actor, Ashton Kutcher is more than just an actor. He is also a model and entrepreneur. Just like his wife, Kutcher made his first appearance as Michael Kelso on The ’70s Show. This was followed by his first film appearances in Coming Soon and Dude, Where’s My Cat – two comedy movies that hit the box office.

Kutcher has appeared in movies with remarkable characters in Two and a Half Men, Jobs, and The Ranch. Besides just acting, he has produced a T.V. series, Punk’d. Similarly, he is also the co-founder of a venture capitalist firm, A-Grade Investments.

Being the daughter of such successful actors, Wyatt, is a lucky girl! It will take years before she starts working, but we can only guess it’s in the footsteps of her parents. Regardless, we wish her all the best for a bright future!

Wyatt is the lovely elder daughter of the two most renowned actors in Hollywood. This means, at just 7 years old, she has a life that we all dream of.

Her mother, Mila Kunis, has a net worth of $75 million dollars. On the other hand, her father, Ashton Kutcher, stands at a whopping income of $200 million dollars. The combined wealth of both of her parents allows Wyatt to have a very fulfilling lifestyle.