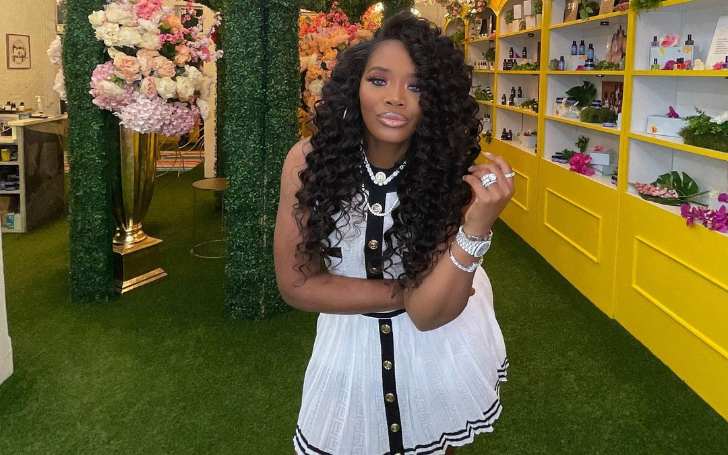 Yandy Smith is a famous American actress, entrepreneur, social media influencer, and film producer. But she came to the limelight after she made an entry in the show named Love & Hip Hop: New York which gave her an identity as a TV reality star. Following her debut in Television, further, she acted and produced some movies, and moreover, she is an owner of a fashion company and a restaurant.

Besides her career, she is equally known for her long-term relationship with her husband, Mendeecees Harris. Harris has been sent to jail two times. Previously, her spouse was accused of sexual abuse and later of a drug dealing case. Despite all these accusations, Yandy stood strong by her husband’s side and later re-united after Harris was released from prison. The couple married two times. Well, in between all these, is the couple sharing good terms with each other in 2022? How about their children?

Today, in this article, we are going to talk about every personal and professional detail of Yandy Smith-Harris, from her age to her children and husband, and her family relationship. Let’s get into it.

Yandy Smith (full name, Yandy Smith-Harris) was born to Ralph smith and Laura Smith on the 19th of  March 1982 in Harlem, New York, the United States. As of 2022, she is 40 years of age and her birth sign is Pisces. Her father Ralph Smith is reportedly a businessman while her mother is a housewife. She grew up in her hometown being very close to her parents.

Similarly, about her siblings, some of the sources claimed Juelz Santana, an American rapper as her brother even though it is not clear yet. Besides, Yandy belongs to a mixed (African-American) ethnicity and is of American nationality.

Talking about her educational background, she enrolled at Howard University for her diploma-level study. In Howard, Yandy studied a business management course with the subjects, of finance, accountancy, and business law. In her exclusive talk with Necole Bitchie, she revealed that for the first two years she studied on scholarship.

Yandy Smith’ Career: She firstly Began as an Executive Assistant

After Yandy received her business management degree from Howard, she firstly joined Violator Management as an intern. She then started working as an assistant and then executive assistant to Mona Scott-Young, an American Television Producer. During her job as an assistant, she worked for star clients like Busta Rhymes, 50 Cent, and others.

In the meantime, her boss, Mona established a company named Monami Entertainment where Smith became the president. Around that time she met the rapper Jim Jones and that is how her journey in Television began.

Smith’s journey to the show started as a Business partner with the show’s executive producer, Jim Ackerman. In the beginning, the show’s was based on Jim Jones’ life and they had already shot some of the parts but unfortunately, because of Jim’s personal reasons, the shooting got affected. That’s why Yandy entered the show and soon became the main character.

As a result, she became one of the most popular casts of the TV reality series, Love & Hip Hop: New York from season 2 to season 10.

She is An Actor And Producer Too: What’s More On Her Career

The love and hip-hop star haven’t limited her ability within one field. She is also involved in the acting field as well. By 2022, she has done three movies and series. First, in 2018, she acted in a short movie named Two Days in Harlem in which she portrayed the character of Shavonne Gregg. Further, in 2018, she appeared as Jillian Anderson on two episodes of the TV series, Illusion. Lately, she acted in The Deadly Getaway which was released in 2022 in the US.

Moreover, the reality TV star is a restaurant owner. In cooperation with her partner Mendeecees Harris, she has opened a restaurant name Dancin Crepe in New Atlanta. Additionally, she is the brand manager, a part owner, and president of Everything Girls Love lifestyle web publishing and fashion brand. For all her success in her career especially for her business accomplishments, Billboard Magazine even listed her as one of the “Top 30 Executives Under 30” for 2008.

Yandy Smith Is A Married Woman: Who Is Her Husband?

Currently, the Harlem-born actress is married to Mendeecees Harris whom she for the first time met on the show, Love & Hip Hop: New York. The duo dated each other for a long time and shared vows on 25 May 2015. Her grand marriage with Mendeecees was shown in the special episode of the VH1 show where her parents also appeared.

However. her marital status got a lot of criticism after she told that her marriage with her husband is yet to legalize. Regardless, the beautiful couple renewed their vows. On September 6, 2021, she posted her wedding photos with the caption,

Ok so we did a thing…AN AMAZING THING! @mendeecees 💕Thank you @people for exclusively covering or vow renewal. I have so many details and behind the scenes to share with you all. It was truly a fairytale moment for a princess💕💕

Further, on September 8, she uploaded her photos in a wedding gown and wrote,

Now let’s get into this reception. It was a real celebration of Black Love, overcoming struggle, resilience and finally, a dream deferred made reality.

As of now, Yandy is in a loving relationship with her husband Mendeecees and fully enjoying her success along with her beautiful family life.

Who Is Mendeecees Harris? What Happened To His 8 Years Prison Sentence

Mendeecees is also a Harlem native born on 26th October 1978. As said before, he was a part of the show Love & Hip Hop from where his journey with his now wife began. But prior to Harris’ entry into the TV industry, he was a real estate entrepreneur. Besides, he is also a DJ, host, and owner of a recording studio, Beat Factory in The Bronx. Despite being so career-oriented, why did Harris go to Jail?

Actually, he was charged with cocaine distribution in New York in 2015. The celebrity husband was eventually jailed and got a punishment of 10 years initially, but was later granted 2 years off as a plea deal. Nevertheless, on January 29, 2020, he was released from prison. His punishment was decreased and finally, he united with his family. In this regard, Madame Noire told, “While incarcerated, Harris completed a substance abuse program and took courses in parenting, financial management, health, nutrition, and public speaking. His substance abuse program decreased his sentence by a year.”

Yandy Smith’ Kid: She Is A Mother Of Three Children

An actress shares two children with her husband Mendeecees named Skyler Smith-Harris and Omare Harris. Omare is her first child who was born on 16 July 2012 and as of 2022, her son is a 10 years old boy. Further, she became a mother for the second time after their daughter Skyler was born on the 26th of January 2015.

Apart from her two biological children, the pair also adopted a kid. The star adopted a teen girl named Infinity Gilyard when her husband was still in jail. Infinity today is a college student.

On the other hand, her spouse is a father of five children. Before Yandy and Harris’ meeting, he was in a relationship with Samantha Wallace with whom Harris has a son Lil, and from his affair with Erika DeShazo, he has a child named Aasim.

With her adopted child, Yandy wasn’t really on bad terms. As per Essence, she no longer has good bonding with Infinity. The relationship between mother-daughter reached some complications several years after she was adopted.

Both of them even appeared on the episode of the series Love & Hip Hop where they seem to be hurt by each other. They had a strong argument in which Yandy said, “I said Infinity, ‘if you do this, you cannot stay under this roof.’ And behind my back, you did it.”

What Is The Net Worth Of Yandy Smith?

Going through the article, you already know for sure that Yandy is professionally active in multiple professions. She is already a TV reality star and apart from that, she is also a producer, actor, musician, owner of a fashion company and a restaurant, and many others.

So, undoubtedly, it is safe to say that she has amassed a huge amount of money as she has multiple income sources. Hence, Yandy has a net worth of $15 million as of 2022.