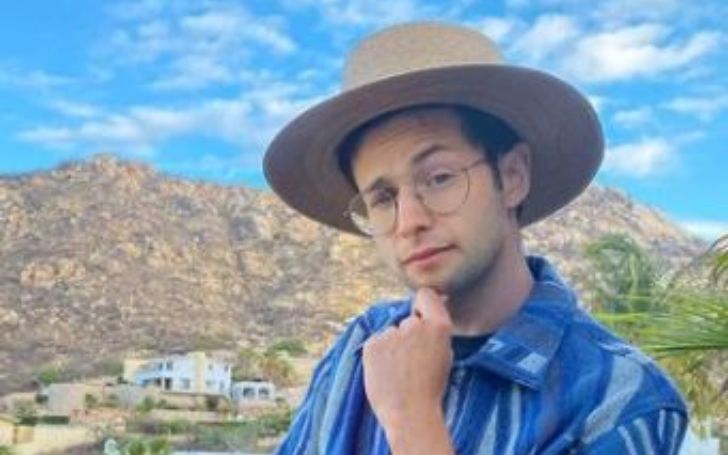 Zach Kornfeld, 32, is an LA-based video producer and former actor best known as a part of the comedy group The Try Guys. He first came to the limelight as a part of an American media and entertainment company BuzzFeed.

After leaving BuzzFeed in 2018, Zach, along with a few other partners Keith Habersberger, Ned Fulmer, and Eugene Lee Yang started their own YouTube channel. Their YouTube has over 7.81 million total subscribers with 467 total videos as of now.

Apart from this, Kornfeld also interned at The Weinstein Company as a production assistant on Step Up 3D. Similarly, he even launched a tea brand called Zadiko. But what about his love life? What is the truth about his gay rumors? Did he ever have a girlfriend?

Stay with us to know more about the comedian’s personal life, girlfriend, career, and more. Is Zach Kornfeld married? Find out here.

Zach Kornfeld was born on 26th July 1990 in Scarsdale, NY, the USA under the birth sign Leo. He was born to his mother Margo and father Adam Kornfeld.

Kornfeld who will turn 32 in 2022 grew up alongside his sister Stephanie in their hometown. He holds American nationality and has an Ashkenazi Jewish heritage.

Talking about his education, he went to a local high school. Later, he graduated with a Bachelor’s degree in Fine Arts from Emerson College in 2012.

The 32-year-old content creator was diagnosed with an autoimmune illness called ankylosing spondylitis back in 2017. He even talked about his illness in one of his videos for BuzzFeed.

The illness causes tiny bones in the body to start growing and fuse into one over time. This causes chronic back pain, inflammation, and stiffness in the body.

Zach went undiagnosed for several years thinking that the pain was caused by scoliosis. Initially, he relied on pain-relieving medications but as they no longer worked on him, Zach began focusing on changing his diet and lifestyle.

Moreover, he even started a tea company called Zadiko in August 2020 as it helps him in battling his illness.

Shortly after graduating college, Zach went to intern at the Weinstein Company in 2010. He later worked as a production assistant on Step Up 3D.

The video producer joined the American Internet media, news, and entertainment company called BuzzFeed, Inc. in 2014. While working at the company, he teamed up with Keith, Eugene, and Ned and began creating short comedic videos for their comedy group The Try Guys.

Their first ever video ‘Guys Try Ladies’ Underwear for the First Time’ went viral and has over 22 million total views so far.

He worked for the company for about four years. However, in 2018, the group of four decided to leave BuzzFeed and start their own YouTube channel Try Out Guys.

Kornfeld And The Try Out Group

After leaving BuzzFeed, Zach Kornfeld along with his four friends established their own YouTube under the name The Try Guys on 23rd May 2018.

So far, they have accumulated over 7.81 subscribers and have over 2.11 billion total views with 467 videos.

According to Social Blade, the youtube channel can make between $6k – $96.2k per month to $72.1k – $1.2 million yearly. On the other hand, some other online sources claimed that they earn around $3 million per year from their channel.

The Try Guys star is a private person when it comes to his personal life. Despite having his whole career based on the social media platform, Zach rarely mentioned his love life in the media.

And due to his sole reason, many fans and followers speculated that Kornfeld was Gay indeed. However, all the speculations were proved wrong when he announced his engagement with now-fiance Maggie Bustamante.

Zach And His Girlfriend Maggie Confirmed Their Relationship In 2018

Zach shut down rumors of him being gay or asexual in December 2018 after he confirmed dating a pediatric nurse Maggie Bustamante. He also revealed that the pair had been secretly dating since 2015.

After their relationship was confirmed to the public, the pair got engaged on 31st August 2020.

Zach proposed to his girlfriend-turned-fiancee Maggie in a romantic beach proposal with a huge diamond ring. The proposal was just a day after Zach’s birthday.

But when are Zach and his partner Maggie getting married? Well, the couple has not revealed their wedding plans yet. And in fact, the couple does not seem in hurry to tie the knot. That said, we would love to see Maggie as Zach’s wife in the future.

Well, Zach’s fiancee Maggie Bustamante is a registered nurse, and fitness and wellness advocate who came to the limelight with her relationship with him. She is an American of Peruvian ethnic descent.

As of now, she hosts the podcast You Can Sit With Us alongside fellow Try Wives Beck Habersberger and Ariel Fulmer. She has over 288k followers on IG where she shares posts and stories about her lifestyle and her day-to-day work.

How Rich Is The Try Guys Star Zach Kornfeld In 2022?

According to a few online sources, Kornfeld’s net worth is around $2 million as of 2022. Thanks to his successful YouTube career, he is a millionaire.

Similarly, his tea brand Zadiko also adds up to his fortunes. The tea reportedly costs around $20 for 42.5grams or 1.5oz.

He has over 1.3 million on Instagram, 462.9k followers on Twitter, and over 867.3k on TikTok. His brand endorsement deals and commercial ads also earn him thousands of dollars undoubtedly.