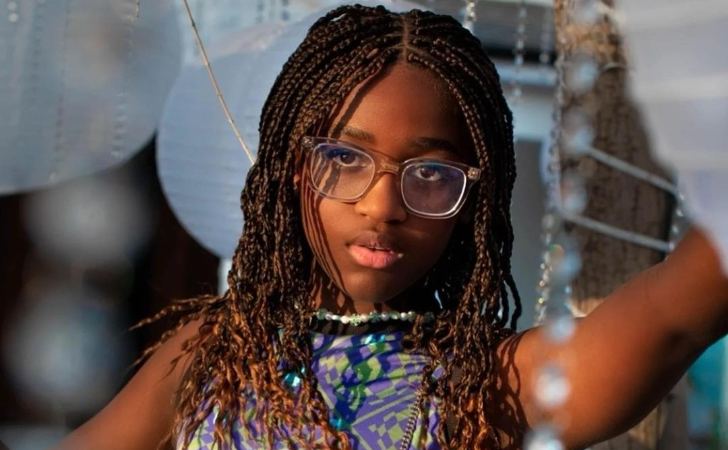 Zaya Wade is a celebrity kid famous for being the trans daughter of former American basketball player Dwyane Wade. Her father Dwayne is one of the best basketball players of his time winning three National Basketball Associations championships.

Besides, her mother is Siohvaughn Funches, an American public speaker, counselor, and author. She is also a founder and president of a non-profit organization named A Woman’s Worth Foundation. So, besides being the child of such achiever parents, Who actually Zaya Wade is? What does she think of coming out as transgender at such a young age?

Here’s everything about the NBA player’s daughter Zaya along with her early life, education, her experience being a trans teen, family, and relationship. Here we go.

What Is The Age Of Zaya Wade? Is She Adopted?

Unlike the rumors, she is not adopted but the biological child of father Dwyane Wade, & mother Siohvaughn Funches.

Talking about her education, Zaya is still a school student and is studying at Sierra Canyon School. Apart from academics, she is more interested in extracurricular activities like singing and dancing.

Besides, she belongs to the Afro-American ethnicity and holds American Nationality.

Zaya’s parents Dwyane and Siohvaughn dated each other when they were still in High School. At the time, her mother was just fifteen years old. After completing high school, Siohvaughn shifted to Dwyane’s apartment and together they gave birth to their first child on February 4, 2002.

After having their son, they finally tied the knot on May 18, 2002. As years passes, the duo got to experience another happy moment as parents as they were again blessed with another son on May 29, 2007. However, that happiness didn’t remain for a long time as they choose to part ways in the same year. Wade filed for divorce against his then-partner which was finalized by the court in the year 2010 giving custody of both the child to Dwyane Wade.

How Many Siblings Does Zaya Wade Have?

Zaire Wade is Zaya’s biological brother. He was born on February 4, 2002. By profession, he is an American Professional basketball player just like his father, Dwyane.

Further, Zaya has her half-brother Xavier from her father’s relationship with his longtime girlfriend Aja Metoyer. Xavier was born on 2013 so as of today, he is just an 8-year-old child. Additionally, she got her half-sister from her dad’s second marriage, Kaaviya. She was born on November 7, 2018, through surrogacy.

In the year 2020, Zaya came out as a trans-woman. Dwyane, her father, in an exclusive talk on The Ellen DeGeneres Show, said

Zaya, our 12-year-old, came home — I don’t know if everyone knows, originally named Zion; Zion, born as a boy — came home and said, ‘Hey, so I want to talk to you guys. I think going forward, I’m ready to live my truth. And I want to be referenced as she and her. I’d love for you guys to call me Zaya.

In this regard, Zaya, herself has opened up about her experience of living as a transgender teen. As per Zaya, she faced a lot of criticism for her decision to be trans. In her exclusive talk with Logo, she said

“There are genuinely people out there who think that you’re a kid, this is a phase, or you don’t actually know what you’re talking about.

But, despite everything, Dwyane’s trans daughter is happy and proud of who she is. Let’s have a look at her words,

“Being my full authentic self feels like freedom. Being out and open and truthful about who I am to myself and others is just freeing. It’s a beautiful feeling to have and hold and to be able to share with the rest of the world.”

Despite being a member of LGBTQIA, Zaya has no interest in celebrating pride month. As per her father Dwyane, she has already made clear that she won’t celebrate pride months just like others. More than that, a trans teen wants to help the families in the LGBTQIA community.

Zaya’s Parents Are Her Biggest Supporter

Everyone in the world has someone who supports them in their highs and lows. Just like that, Zaya also has great supporters in her life; her father Dwyane, and her stepmother Gabrielle Union.

Zaya, in her every decision got full support from her parents. When she made her first appearance as a transgender teen, her beloved daddy and her stepmother stood strong on her side. On the big turn of her life, both of them fully support her introducing her as Zaya in their respective account. Her dad Dwayne wrote,

“Everyone allow her to re-introduce herself her name is Zaya Wade! She has emerged as one of the young faces and voices for the LGBTQ+ community.

Similarly, Union, her father’s current wife on her transition, wrote,

“Meet Zaya, “She’s compassionate, loving, whip smart and we are so proud of her. It’s Ok to listen to, love & respect your children exactly as they are. Love and light good people.”

Likewise, Zaya, time and again, got great advice from both of her guardians. They have been her strong pillars in all situations, from facing criticism to handling the beauty standards, in everything.

What Does Zaya Wade Do For Living? Her Career

As already mentioned above, she is still a school student and has not chosen a career professionally. However, going by her Instagram pages, it seems that a trans teen has started modeling for CHANEL BEAUTY. However, she has not officially spoken about it, thus we can not make any confirmations.

Is Zaya Wade’s Relationship Status: Is She Dating A Boyfriend?

Zaya, at such a young age, is more open about her identity and daring to live her life on her own, the same goes for her relationship status too. Currently, during the Easter celebration organized by her family, she is seen lip-locking with a boy named Hudson, who is also believed to be transgender.

Regarding their partnership, Hudson posted a post on his Instagram captioning, Passover and Easter have never been more fun, I Love You 💙♾ #zayawade.

Hence, it can be assumed that Zaya is currently dating Hudson @HuazeLeo and is not hesitant to show her significant other. Hope their romantic relationship continues.

Moving on to her presence on social networking sites, Zaya is hugely active on Instagram under the username @zayawade. Till today, she has shared 166 posts and has 547k followers on her Insta account.

What Is Zaya Wade’s Net Worth?

As we said earlier, she is a school student. So, it is possible that she has time to produce income sources on her own. Nevertheless, some websites have estimated her net worth at $ 1,035,000 which is still questionable.

On the other hand, her famous father, Dwyane has a net worth of $ 170 million.