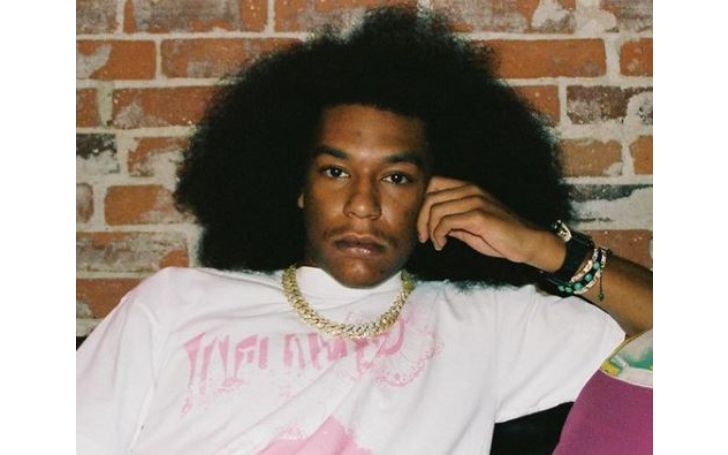 Zion Shamaree Mayweather is the second child between Floyd Mayweather and the late Josie Harris. Zion’s father is revered as one of the greatest boxers of all time.

As the son of a great boxer, people are wondering if he is following in the footsteps of his parents or not. Well, it looks like Zion isn’t interested in the boxing scene, so what is he doing nowadays?

In this article, we’re going to find out all the info on Zion Shamaree Mayweather including his early life, current whereabouts, and more!

Zion Shamaree Mayweather comes from a line of boxers

Born on 28th March 2001, in the US, Zion is the second son between Floyd Mayweather and Josie Harris.

He comes from a line of boxers. Aside from his world-renowned father, Zion’s grandpa Floyd Mayweather Sr. was also a boxer, who even fought with Sugar Ray Leonard.

Moreover, Zion’s great uncles Jeff and the late Roger Mayweather were also boxers. Roger was Floyd’s trainer and during his time as a boxer, Roger also won two world championships.

Besides, Zion belongs to the African-American ethnicity.

His parents had an unstable relationship

Floyd and Zion’s mother Josie were involved in a tumultuous relationship from the beginning. According to Josie, Floyd has, a number of times, physically abused her.

She even filed a domestic battery charge against her baby father two times. The first charge was filed in the early 2000s, for which he was suspended from the game for six months alongside two days of house arrest and performed 48 hours of community service.

In the year 2004, he was slapped with a one-year suspended jail sentence. At the time, the court convicted him of two counts of misdemeanor battery against two women.

Further, in the year 2010, Floyd once again got arrested by the authorities over domestic battery charges.

In March 2020, Zion’s mother, Josie Harris was found unconscious inside her car that was parked in her California home’s driveway.

The coroner report claimed Josie died of ‘mixed drug toxicity.’ She had consumed Fentanyl and Alprazolam. Fentanyl is an opioid that is sold under brand names such as Xanax.

Josie had been using Xanax for a long time. She even mentioned many times that because of Floyd’s violent nature, she would often consume Xanax whenever he would visit her to take the kids.

Since an early age, Zion has been living in Los Angeles, California and this is where he also finished his formal and higher education.

How many siblings does Zion Shamaree have?

Moving towards his half-sibling, he has one sister named Iyanna aka Yaya Mayweather born on May 20, 2000. She is the only daughter between Floyd and his ex-girlfriend Melissa Brim.

Apart from them, Shamaree also has one step-sibling named Devion Cromwell, born in 1996, whom his father raised while he was dating Devion’s mom Melissa.

All five of them are incredibly close with each other. Despite all that transpired between the Mayweather siblings and their dad, they are always there to support him. For instance, back when Floyd fought against Connor McGregor, his kids were there to show their support.

We’re sure many of you might already be aware of Iyanna Mayweather’s incident with her boyfriend’s baby mama.

So what happened was, on the night of April 9th, 2020, at around 1:30, am, Yaya went to her boyfriend NBA YoungBoy’s house and confronted his baby mama, Lapattra Lashai Jacobs, who at the time was at NBA’s residence.

Both women started fighting which eventually turned deadly. According to the reports, Yaya allegedly stabbed Lapattra twice on her biceps. This type of violent action is considered a first-degree felony and can lead to 99 years in prison or a $10,000 fine.

Meanwhile, in her defense, Yaya claims she did all that in self-defense as Lapattra was pulling her hair and dragged her to the kitchen. If reports are to be believed, it is highly unlikely she will receive 99-years in prison considering her no criminal past.

Considering his father is a billionaire, Zion doesn’t really have to do anything. But Zion and his siblings all are trying their best to do their own thing and make it on their own.

From an early age, all the four Mayweather siblings have been watching his dad fight numerous boxing matches. As they watched boxing first hand, it seems only natural that they might also find it interesting, however, it turned out different altogether.

In an interview with the US magazine at the age of 14, Koraun said he finds boxing boring. He stated,

“It is just like how people sit in the ring and fight for 12 rounds and it gets boring after a while. Sometimes they run.”

Moreover, Floyd also claimed both of his sons Koraun and Zion won’t box ever. As to why? Well, according to him, they won’t box because they smoke weed. He said, “Well, my two boys they like to smoke weed so I know they ain’t going to box.”

Who is Zion Shamaree Mayweather’s girlfriend? Is he dating?

Going through Zion’s social media profile it looks like Zion doesn’t have a girlfriend, as of this moment. It is fair to assume, the star kid doesn’t want any burden that comes with a committed relationship.

Even if he is dating someone secretly, Zion tends to keep his private life behind closed doors.

Floyd isn’t called Money for no reason. The boxer has amassed a massive net worth of $1.2 billion. Throughout his career, he generated over $1.67 billion in revenue even surpassing big boxers like Mike Tyson, Evander Holyfield, Lennox Lewis.

Being Floyd’s son Zion surely enjoys all the riches that life has to offer. From driving around luxurious cars to visiting numerous exotic locations, he truly lives an envious life.

He often wears extravagant goodies such as an RM011 Flyback Chronograph which costs a staggering $200,000. He also wears pretty expensive jewelry. All in all, Zion truly lives a lavish life.

Zion and his brother shorted a driver out of his wages

In June 2021, a South Florida driver alleged that Zion and his older brother Koraun didn’t pay him his dues. According to him, the two parties had an agreement that the driver will be paid $2000 along with a boxing glove signed by Floyd and a ticket to a boxing fight.

The driver then drove the two boys around for more than 5 days, 13 hours a day but he was only paid $700.