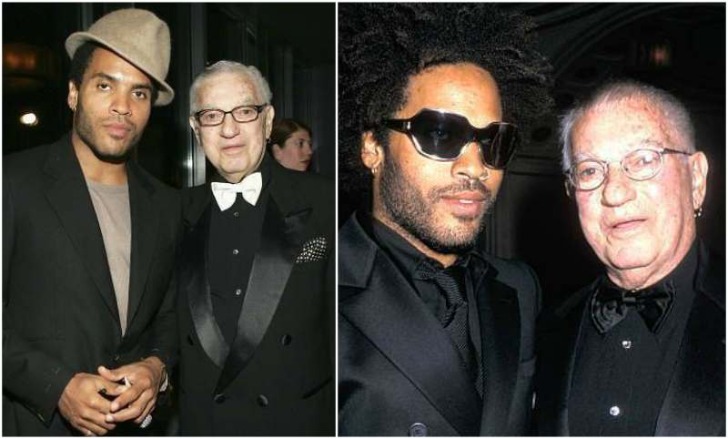 Sy Kravitz was a former US army and a retired NBC producer. Besides his career, Sy was more popular for being the father of an American singer, songwriter, and actor Lenny Kravitz (aka Leonard Albert Kravitz). Besides, Lenny who won four Grammy Awards for Best Male Rock Vocal Performance is also a multi-instrumentalist and a record producer.

Besides being a celebrity father, Kravitz was also a celebrity ex-spouse. He was married to the late actress Roxie Roker. The former flames married for several years before they separated. Sadly, Kravitz passed away in his early 80s. So, what was the cause of his death?

Today, in this article, we are going to talk about every personal and professional detail of Lenny Kravitz’s Late Father Sy Kravitz. Stick to us to know more about him including his ethnicity, daughters, and more!

Who Were Sy Kravitz’s Parents? His Bio And Ethnicity

Sy Kravitz (full name, Seymour Sol Kravitz) was born to the father Joseph Kravitz and the mother Jean Kaufman on December 10, 1924, in Brooklyn, New York, the United States. His father was an employee at a telecommunication company while his mother was a housewife. His parents raised him along with his younger brother Leonard Martin Kravitz.

As for education, Kravitz studied at Beverly Hills High school and later enrolled in the University. He received his degree in Bachelor of Arts from the college. Besides, Seymour had Jewish ancestry and belonged to a mixed ethnical race. And his nationality was American.

Like him, his late brother Leonard was also an American soldier in the US army who served in the Korean War. In the war, Leonard lost his life at just the age of 20 on March 7, 1951, in Yangpyeong County, South Korea. For his contribution to the Korean war, the ex-army was honored with a medal after his demise.

Further, in the year 2014, Leonard was awarded the country’s second highest award for valor Distinguished Service Cross which was received by Laurie Wenger, daughter of Sy Kravitz.

Did Sy Kravitz Blame Himself for The Death Of His Brother?

As per the interview given by Sy’s son Lenny, his father carried a sense of guilt over his brother’s death. Actually, Leonard had followed the path of his brother Seymour by joining the military service. His unfortunate death was so devastating for the family which is why Sy somewhere blamed himself for his brother’s death. In this regard, Lenny Kravitz told,

“I think that was something my father had to live with, knowing that he did take some of the blame, if not a lot of it,”

What Did Sy Kravitz Do For Living? His Career Detail

Kravitz was a retired television producer of Ukrainian Jewish descent for the National Broadcasting Company (NBC). During his working period at NBC, Kravitz used to supervise video production and development. His work in NBC helped him to gain popularity, due to which Sy was later featured in a documentary named Sid Bernstein Presents…

Prior to his television job, Sy was in the US military force. As per sources, he fought in the second world war and the Korean War. Further, he also worked as a news reporter for NBC during the Vietnam war.

Sy Kravitz Was Married To The Jefferson’s Actress Roxie Roker

In the year 1962, Sy Kravitz tied the knot with Roxie Roxer, in a private wedding ceremony. His then-wife was an Afro-Bahamian-American actress. The couple was in a marital relationship for 23 years. Despite their enduring commitment, they parted ways in the year 1985.

As per sources, infidelity was a reason for their separation as Kravitz cheated on his wife several times.

He Has Two Kids With His First-Wife

Prior to his marriage to Roker, Kravitz was previously married to a lady named Erika. He exchanged his vows with his first wife in 1948. Although neither of them did ever talk about their marriage, they together had 2 children.

The two, however, divorced after a few years of their marriage.

Who Was His Second Wife, Roxie? Detail On Her

As we mentioned above, his wife Roxie was an actress. She acted in several movies and series throughout her acting career. She first started with the Negro Ensemble Company, a theatre in New York, and later became one of a successful theatre artists.

Following her theatre work, she signed with various projects like Change at 125th Street, Claudine, The Bermuda Triangle, Making of a Male Model, The Niger River, and many more.

Among all her filmography, she was famous for her portrayal in the CBC sitcom The Jeffersons as Helen Willis. For her contributions, she got several nominations, among which she won an Obie Award for the movie The Niger River. Further, she even worked as a reporter for WNEW-TV in New York.

Sy Kravitz Was A Father Of 3 Children

From his two marriages, Kravitz had 2 daughters named Laurie Wenger and Tedi, and a son Lenny Kravitz. Laurie Wenger and Tedi are his children from his first marriage with Erica. His daughter Laurie was a recipient of the medal of honor on the behalf of her uncle Leonard in 2014. She graduated from Fairleigh Dickinson University with a degree in Elementary education.

Similarly, Lenny is his only son from his marriage to the actress Roxie Roker. As of 2022, Lenny Kravitz is a huge name in the American Entertainment Industry.

A retired NBC producer suffered from Leukemia in his early 80s. He was admitted to New York City Hospital for treatment but unfortunately, he died one day before his son Lenny’s US tour in New York County, Manhattan. After his death, he was buried in Mount Carmel Cemetery in Glendale, Queens County. Later, his son Lenny gave a tribute to his father at the Mohegan Sun Casino Arena.

On the other side, his famous actress wife died of breast cancer on December 2, 1995, in Los Angeles, California.

Sy was a retired army and an NBC producer. So, it is obvious to say that he may have earned a lot of fortune from his professional career. As per sources, his net worth before his death was $1 million.