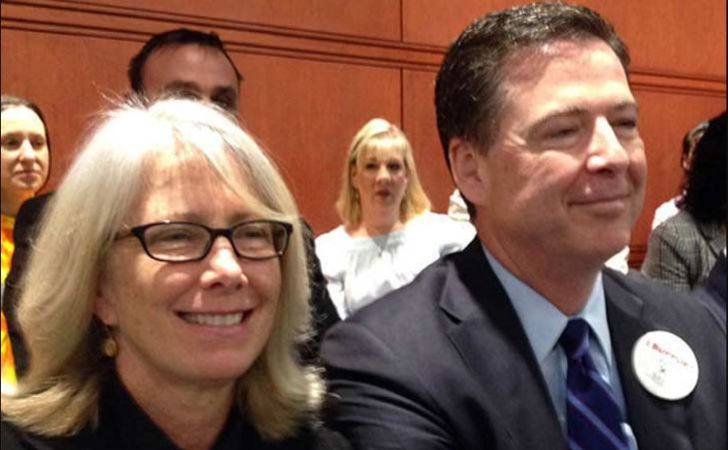 Patrice Failor is an American counselor and a special advocate in Juvenile court, who has dedicated her life to the field for years. She became famous in the media as the wife of an American lawyer James Comey. Her husband served as the seventh Director of the ‘Federal Bureau of Investigation.

With over three decades into marriage, Failor has balanced both her professional and family life. She also shared a good relationship with her parents in the past and is pretty close to her child as well.

What’s more? Well, we have brought you a detailed bio, with all the details including her career, and relationships as well.

James B. Comey’s wife Patrice Failor was born on November 10, 1960, in the United States of America. She spent most of her early days in Northern Virginia and Iowa, where she also finished her schooling.

Following her high school, she attended The College of William & Mary, in Williamsburg, Virginia, graduating in 1982. Soon after the completion of her bachelor’s degree, she did her master’s in counseling.

Patrice Failor Was A Special Advocate In Juvenile Court

She has been leading a successful career as an advocate and lawyer. Shortly after the completion of her master’s degree in counseling, she joined the Bridgeport superior court as a volunteer.

Throughout this period, she involved herself in several “Juvenile Justice Issues” which earned her an opportunity to work as a special advocate in Juvenile court. Soon after that in 2016, she became the part and testified at the Connecticut Judiciary Committee in order to raise attention towards neglected children.

Apart from raising issues about the needy street kids, Failor along with her husband Comey has also fostered several children over the years.

She Met Her Husband James Comey During Her College Days

As we mentioned earlier, Patrice Failor is widely famous as the wife of James Comey. The couple married in 1987, among close friends and family members.

The successful couple Failor and Comey met for the first time at their college’s cocktail party, where they were introduced by a mutual friend. Both the duo studied at the College of William and Mary.

In one of the interviews, Comey stated that he doesn’t remember the exact occasion of their first encounter, but said that she nominated him to run for president of their dorm council. As per him, it was after that he was introduced by a friend and that he talked for straight three hours with her.

Patrice Failor has five children from her marital relationship. She shares a great relationship with all her children Abby, Claire, Brien, Kate, and Maurene.

Moreover, her oldest daughter Maurene is a graduate of Harvard Law. Having graduated in 2013, she is already serving as an assistant U.S. attorney in the U.S. Attorney’s Office for the Southern District of New York.

Likewise, one of her sons Brien was a basketball player for Kenyon College in Ohio. Standing 6 foot 8 inches, he was extremely good as a player during his college days.

Moreover, she is also a grandmother. Well, her husband often shares photos of their grandchild on his Instagram. Back on May 1, 2019, James shared a photo of his grandchild for the first time. In the caption, he wrote, “Life can be so good.” Check out the photo here.

Patrice Failor Lost a Son A Few Days After Birth

If you did not know, she has been a mother 6 times but lost one of her children. As per the reports, one of her children Collin Comey, who was born on August 4, 1995, died just nine days later on August 13, 1995. The death was caused by bacterial Group B Strep infection.

A month after the death of her son, Patrice wrote a column in The Baltimore Sun, explaining the death of Collin and at the same time raising awareness about the disease. She clearly stated that the infection is treatable and that one should take precautionary measures. She wrote,

I do not want to frighten anyone with my story. But I cannot allow the death of my beautiful boy to become just one in a long line of GBS tragedies.

She And Her Spouse Have Secret Corner For LGBTQ Community

Though Patrice has not openly spoken about the LGBTQ community, she has a secret corner for them. In fact, back in 2017, she along with Comey attended a Broadway show about a lesbian and her gay father.

Unexpectedly they were so moved by the story that they had tears rolling down all the while. The producer of the show in a statement to The New York Times said that they were wiping tears as they met the cast of the show.

Patrice Failor’s Husband Was Held Hostage By a Rapist

Not many know but Failor’s husband along with his brother was kidnapped by a rapist; at the time he was just 15. The incident dates back to 1977 when he was held hostage by a criminal named the Ramsey rapist. The man reportedly held them at gunpoint at their Allendale home.

While Comey managed to lock them into a bathroom and later called police, finally to their rescue. A newspaper wrote about the incident stating,

The Comey brothers, locked in a bathroom while the intruder searched the home, escaped through a window, only to encounter the man again on their lawn. The brothers ran back inside the house, locked the doors and called police, setting off a massive manhunt