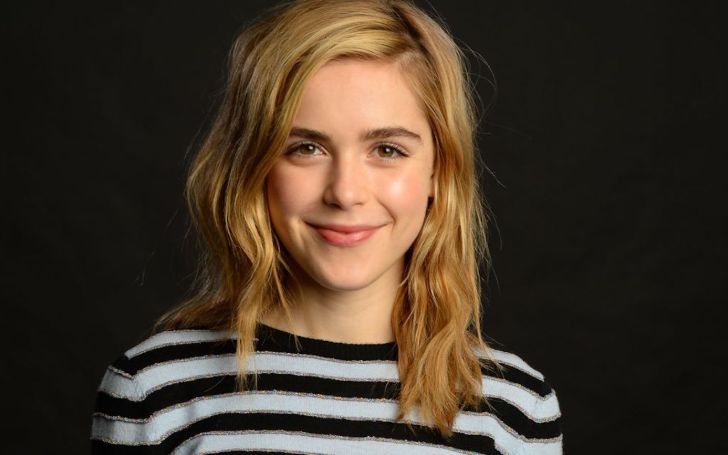 Who is Kiernan Shipka’s boyfriend? Well, this is one of the most inquired questions about the Mad Men actress. While Kiernan is linked with a number of men including her Chilling Adventures of Sabrina co-actor Ross Lynch & Gavin Leatherwood, the reality seems slightly different.

Here we will find out who Kiernan is dating in real life. Also, let’s explore the truth about her speculated relationship with Christian Coppola, Gavin, and Charlie Oldman- all the men she has been rumored dating.

Who Is Kiernan Shipka Boyfriend in 2021?

The 21 years old American actress, Kiernan is not dating anyone as of yet. Considering the fact that Shipka has not addressed her relationship status in public, it would be too soon to come up with a conclusion if she has a boyfriend in 2021.

However, the actress has not kept away from the pain of being linked with men in life. Recently in July 2019, it was rumored that Kiernan was dating film director, Christian Coppola.

Well, let’s unravel all the mysteries about her past affairs.

Like we have already mentioned above Kiernan has not opened up about her relationship status, but her actions somehow indicate that she might be dating.

The rumors about their relationship first began after the two were snapped together at the Fendi show in Rome in July 2019.

In fact, the Netflix actress even made an Instagram post together with him which she captioned “My Love.” And as anyone can expect, the post flooded with comments questioning their relationship.

On the other hand, Christian too added the same photo on his Instagram captioning it “when in Rome.”

Not only this, on November 10, 2019, Kiernan made another post together with Christian where she wrote “I love you @ccopp.”

Well, it appears the two are dating but nothing can be confirmed until it is confirmed.

She Was Rumored Dating Charlie Oldman

This time again, the two have not mentioned their relationship verbally and have often been together on several occasions. In fact, their Instagram post shows a decent amount of posts together.

The rumors began after Charlie and Kiernan were spotted at Coachella together. As reported, the two spent a whole week there along with Christian Coppola and 13 Reasons Why’s Alisha Boe.

Kiernan and Ross are known for their on-screen chemistry in Netflix’s Chilling Adventures of Sabrina. While Kiernan portrayed Sabrina Spellman and Ross played her boyfriend Harvey Kinkle in the series.

And needless to mention, the chemistry between the two was such that the audience went on to think that they might be dating in their real-life as well.

However, we feel sad to say Kiernan and Ross never dated on-screen but are definitely good friends.

In one of her interviews with the Seventeen magazine, the actress candidly mentioned that she is too busy for romance and said that she has a lot of professional commitments to meet. Talking of her fashion projects at the time, she said,

“I’ll wrap on Saturday at 6 a.m., so I’m pretty much useless on Saturday. And then Sunday, I have to get all my stuff done for Monday. Occasionally, the cast can drive me out for a fun time, but work is my number one priority right now”

Once again, Kiernan’s relationship with Gavin seems to be a complicated one. While the two never admitted their relationship, it looks like the two had a lot of romance going on off-screen.

On September 11, 2019, Kiernan posted a photo of her clinging to shirtless Gavin.

And as they say, action speaks louder than words, the post made it pretty apparent that the two had things going on between them.

“I love you so much. You are the best ever. Love of my life and the queen of my world. And btw this is totally Gavin and not Kiernan stealing his phone.”

Well, it’s definite that Kiernan wrote the comment herself but this is what makes their romance even more believable.

Find more similar biographies and entertainment articles of famous celebrities be with us.