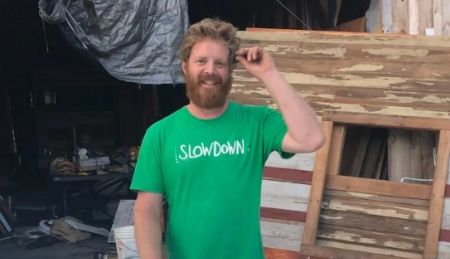 Through his appearance in the Magnolia Network’s show, Chase has achieved immense fame. Thus, there are many of his fans who are curious about his personal life. So, is he married? Does he have children?

In this article, we are going to find out about Maine Cabin Masters’ star Chase Morrill’s wife, career, net worth, kids, and several other interesting facts. Let’s start.

The successful reality TV personality Chase Morrill was born on December 25, 1977, in Augusta, Maine, United States. He is one of two children to his father Eric Morrill and mother Peggy Morrill.

Talking about his childhood, he had a decent one and lived most of his early days along with his sister Ashley Morrill & parents in his hometown. Unfortunately, his father is no more as he passed away in 2014 to cancer. Well, just for a fact, it was his father who taught him all the cabin works.

When it comes to academics, Chase has a good one. He did his schooling in his hometown and later attended Liberal arts College, University of Atlantic, where he finished his graduation.

His Sister Is Also The Part of The Reality TV Show

As we said, Chase also has an older sister Ashley, who is also part of Maine Cabin Masters. She is the only female in the reality TV show and works as a designer. Well, her husband Ryan Eldridge also features on the show as a carpenter.

Talking of Ashley, she is two years older than Chase and was born on the 27th of January 1976. Well, she is an educated individual with a degree in graphic design from the University of Maine.

Chase Morrill Is The Part of Maine Cabin Masters Since 2017

Well, Chase is currently a renowned TV personality and gained fame after his appearance in the Maine Cabin Masters. The show which has a team of five experts primarily focuses on restoring and modifying old cabins to newer designs.

While Chase acts as the leader of the team, his sister Ashley looks after designing work and Ryan is the main carpenter. The team has already renovated numerous old cottages and camps as per the request of the owners.

Moreover, along with restoring things to their original structure, the show also adds modern amenities like solar panels and composting toilets to the structures.

The show has already over seven seasons as of December 2021.

He also Owns A Few Business Other Than The Show

Along with leading a successful reality TV show, Chase also owns a few other businesses. Because of his love for reconstructing and renovating different structures, he co-founded Kennebec Property Services, LCC, now Kennebec Cabin Company (KCC).

Ths business is located in Wayne, 915 Western Ave, Manchester, ME 04351, which he co-founded along with his brother-in-law Ryan.

Well, Chase is a married man. He is married to his long-term girlfriend-turned-wife Sarah Morrill. While the exact details of their wedding are not known, the couple is assumed to be together for over a decade.

The husband and wife first met back when they were in college. They reportedly dated for a while before they walked down the aisle. After years of togetherness, the couple shares a great relationship.

Talking of Chase’s wife Sarah is a native of Massachusetts and a registered nurse by profession. As a professional, she worked for Maine Primary Care Association for a while.

He Has Two Children With His Wife

From her marital relationship with his wife, Chase Morrill is the father to two kids, both daughters. While Maggie Morrill is his older daughter, Nori Morrill is his younger daughter. Unfortunately, the duo has not revealed the exact details about their birth.

Needless to say, as a father Morrill shares a great relationship with both his daughter. In fact, he loves spending time with them and they are often seen going out on vacation together.

Back in April 2019, the family of four went out for a hike in a glacial cirque of Tuckerman Ravine, and they didn’t miss sharing the photos from the day. Check this out.

We hope their relationship remains intact in the coming days as well.

What Is Chase Morrill’s Net Worth?

As a lead cast in one of the most successful shows, Chase definitely makes a good sum of money. According to the sources, the charges around $30,000 per episode of his show Maine Cabin Masters.

Chase Is Active On Social Media

On both platforms, he often posts about his day-to-day life.

What is Delle Bolton doing now? Her Husband, Kids, Cause of Death, Now