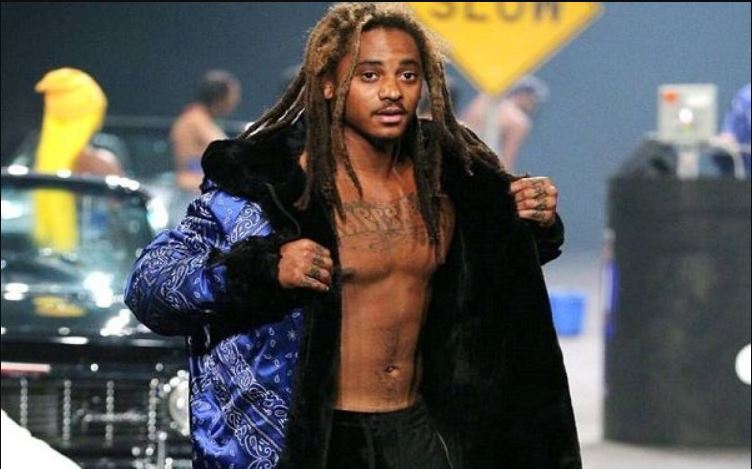 Corde Broadus is the son of the famous rapper Snoop Dogg. But apart from his recognization as a celebrity kid, Corde is also an actor and a rapper known as Spanky Danky. He is quite popular for his work in the 2012 movie We the Party and has also been a part of several music videos.

Apart from his decently successful career, Corde also leads a beautiful romantic life with his partner. In fact, the star kid is already a father of two children likewise.

Well, in this article, we are going to talk about every aspect of Snoop Dogg’s son Corde’s career, love life, relationship with parents, and a lot more interesting details.

Corde Broadus was born on August 21, 1994, in Long Beach, California, United States. He is the eldest son of father Snoop Dogg and mother Shante Broadus.

Besides, for his nationality, Broadus is an American and belongs to the Caucasian ethnicity.

His mom Shante Broadus is a philanthropist and businesswoman. She was born on 30t October 1971, in California. She later went to Long Beach Polytechnic High School. And it was where that Shante met her future husband Snoop Dogg.

As for her professional work, Broadus once worked for Boss Lady Entertainment, a music management company.

He has two siblings, a brother Cordell Broadus and a sister Cori Broadus. He also has a half-sibling, Julian Corrie Broadus. Julian was born from his father’s extramarital relationship with his high school fling Laurie Holmond. Well, like any brother, Corde shares a great relationship with all his siblings.

Corde Broadus Is An Actor And Rapper

Not many know, but like his father, Corde is also a rapper and actor. As an actor, the 27-year-old star kid has also appeared in a few movies and music videos. Back in 2012, he appeared in the comedy film We the Party.

Similarly, Broadus was also part of his father’s music video Drop It Like It’s Hot, where he appeared along with his brothers and father.

Talking about his career as a rapper, he goes by his stage name Spanky Danky. As a rapper, he has released a few songs that include In Dank We Trust (2012), KIC N DA DOE, Whenever We Want It, You Don’t Know, and YOUNG HIPPIE G.

Corde’s career is just taking off and he has not achieved anything like his father yet. But hopefully, we will get to see him as successful.

He Has a Child With Ex-Girlfriend Jessica Kyzer

His only child with Jessica, Zion Kalvin was born on January 10, 2015. Well, upon the birth of the grandchild, Snoop too shared his excitement via Instagram on January 14.

The rapper posted a series of photos, one after another, on the same. Not only snoop, all the members in the family including Julian seemed pretty happy upon the birth of the kid.

Who Is Corde Broadus Dating At Present?

Well, since his break up with Jessica, Corde is in a romantic relationship with Soraya Love. The duo is in a relationship for a while now and is going pretty well in their relationship.

Moreover, the duo also has a daughter from their relationship. They welcomed their first child together Elleven Love, on August 17, 2018. Prior to the birth of their child, they had announced their pregnancy news via a YouTube video, where the couple candidly talked about the coming of the new baby and shared their excitement.

Corde Lost His Third Child 10 Days After His Birth

Elleven was not the only child Corde and his partner Jessica had together from their relationship. Almost a year after the birth of Elleven, the couple welcomed their second kid together, Kai Love, on September 15, 2019.

However, the happiness from the arrival of the new member of the family didn’t last very long. The family lost Kai just 10 days after her birth. Shortly after the death of his kid, Corde wore a heartfelt post on his Instagram writing,

Well, just 2 days after the birth of Kai, Snoop Dogg’s son Corde came up with another post, giving a strong message about life. In the beautiful post, he wrote,

My son did all he needed to do in his 10 days here on earth. He has now graduated and continuing to do work, He died in my arms and that feeling of energy will never leave me. Kai wants all of you to know he’s doing great and wants to continue to inspire those whose light is dim.

While losing Kai was a tragedy for both Corde and Soraya, the couple seems to be strong enough to cope up with the worst in life. Well, the duo seems to have moved on from the tragedy.

And the good news was that Corde Broadus’ gf became pregnant with another child of Corde. Though the couple didn’t announce the pregnancy initially, Soraya’s visible baby bump in her latest videos is pretty suggestive of her pregnancy.

Corde and his partner Soraya became parents for the third time when their son named Sky Love was born on 21st Feb 2021. The baby’s father shared a photo of his son and girlfriend with the caption,

Not many know but Corde’s now girlfriend Soraya is a spiritual guru. In fact, she even runs a YouTube channel that goes by the name “SPIRITUALITY WITH SORAYA LOVE.”

Along with life skills and spiritual teachings, Soraya also gives insight into her family life via her channel. Even Corde and their kids have made multiple appearances on her channel.