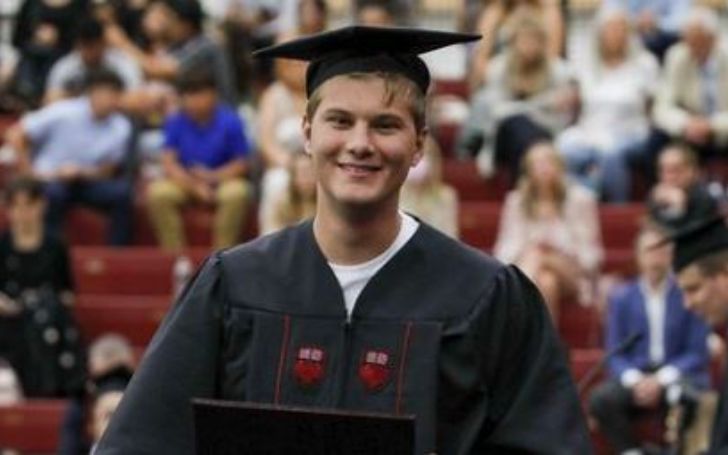 Rory John Gates is the second child and only son of Microsoft cofounder and billionaire Bill Gates and his ex-wife, Melinda Gates. His father is one of the richest men in the world.

As a child, he grew up in a luxurious mansion in Washington alongside his sister. Despite being born to one of the richest men alive, Rory will not inherit his parent’s tremendous fortune.

How rich is Rory John Gates now? How much will he inherit (millions or billions) from his parents? Also, is he dating anyone? Find out more about the only son of Bill Gates, Rory John Gates.

Rory John Gates Is The Only Son Of Bill & Melinda Gates

He was born in Seattle, Washington, the United States on 23rd May 1999. He recently turned 23 in 2022. As we said before, he is the son of Microsoft co-founder Bill Gates and his former wife Melinda French Gates.

He grew up along with his older sister Jennifer Kathrine Gates and his younger sister, Phoebe Adele Gates. Jennifer got married to Egyptian equestrian Nayel Nassar in October 2021.

John is an American as per his nationality and has a mixed ethnic background. His ethnicity from his father’s side is English, German, and Scottish-Irish.

John reportedly went to the private/independent Lakeside prep school located in Seattle, Washington. This is the same school that his father Bill went to as well.

Though most of the online tabloids claim that he earned his MBA in Computer Science and Economics from Duke University and also enrolled at Fuqua School of Business, he actually graduated with a double major and masters from the University of Chicago.

On 6th June, his older sister Jennifer posted a cute picture of them from his graduation ceremony congratulating him on his achievements.

As the son of one of the richest couples in the world, many may have imagined the Gates children to be spoiled brats. However, Bill and Melinda raised their kids with ground rules any other kids have to follow.

During an interview with Mirror, Gates said, “We don’t have cellphones at the table when we are having a meal. We didn’t give our kids cellphones until they were 14 and they complained other kids got them earlier.”

The three siblings were allowed to use cell phones only after they reached 13/14 with limited screen time. That being said, Rory got his first phone in 2012 after he turned 13. Moreover, he was reportedly asked to take out the trash as a part of his unpaid chores.

He Grew Up In A $131 Million Worth Mansion-Details Of his residence Xanadu 2.0 And Its Features

Bill and Melinda built their 66,000 sq ft mansion in the suburbs of Seattle, Washington taking seven years with 300 construction workers. It reportedly cost around $63 million to build with $1 million in tax only.

Likewise, as per sources, almost 500-year-old Douglas fir trees, and materials from the Pacific Northwest region were used to build the house. The house includes a home theatre, a 20-car garage, a trampoline room, a spa, a 60-foot pool, 6 kitchens, 24 bathrooms, a 25,000 sq ft gym, and a reception hall that can accommodate up to 200 guests, and a 2100 sq ft library.

In addition, the house even has a beach with sands imported from the Caribbean. Also, an automated high-tech sensor system is installed to monitor the room’s climate and lighting.

The family of five had been living in the multi-million dollar mansion for a long time.

Will Rory John Gates End Up Working At Microsoft?

As we’ve already mentioned before, Rory is the only son and heir to Bill Gates’ fortunes. The 23-year-old recently graduated with a double major master’s from the University of Chicago, many are claiming that he will join his father’s company anytime soon.

However, as John took law courses as one of his majors, he might pursue a different career path. As for now, it is unclear what Rory has decided to pursue in near future.

According to Melinda Gates, Rory is compassionate and curious. She said,

“He’s intelligent and well-read and deeply informed about the wide range of issues that interest him. He’s a great son and a great brother. He’s inherited his parents’ obsessive love of puzzles. But one of the things that makes me proudest is that Rory is a feminist.”

The Chicago University alumn once traveled to East Africa along with his mother to see some of the work the Bill and Melinda Foundation was doing in Malawi.

The three siblings have undoubtedly inherited their parent’s passion for philanthropy.

Is Rory John & His Siblings Inheriting Their Parent’s Billion-dollar Fortunes?

As brutal as it may sound, Bill Gates is not planning to give his children not a single dollar of more than $10 million in inheritance. The tech genius is planning to donate his now $152 billion fortune to the Bill And Melinda Gates Foundation.

Instead of a billion-dollar worth trust fund, Bill plans to set off his children with good education to kick start their own respective careers. He said,

“Our kids will receive a great education and some money so they are never going to be poorly off but they’ll go out and have their own career.”

He added, “It’s not a favor to kids to have them have huge sums of wealth. It distorts anything they might do, creating their own path.”

Talking about the donations and the children’s reaction, Bill said,

“This money is dedicated to helping the poorest. They know that and they are proud of that, and they go on trips with us to see the work that’s being done.”

According to various sources, Rory John is worth around $20 million as of mid-2022.

Is the 23-year-old Rory Gates Dating Anyone?

Unlike other celebrity kids, Rory John lives a very private lifestyle and tends to keep information related to their love life away from the spotlight.

His Instagram account with 267 followers and 55 posts is also private making it hard to keep up with his social media presence.

As of this writing, it is not clear who John is currently dating. Similarly, information about his past affairs and marriage has not hit the internet so far.

After nearly three decades of marriage, Melinda French and Bill Gates announced their decision to get divorced in May 2021 via a joint statement on Twitter.

In the statement, the former couple wrote,

“After a great deal of thought and a lot of work on our relationship, we have made the decision to end our marriage. We continue to share a belief in that mission and will continue our work together at the foundation, but we no longer believe we can grow together as a couple in this next phase of our lives.”

Their divorce was finalized on 2nd August 2021 after a judge approved their agreement. As per their agreement, neither person will pay spousal support or child support.

Though other financial details were not revealed to the public, some online tabloids assumed that Bill and Melinda could each get $76 billion from his $156 billion net worth as they do not have a prenup.

According to Melinda’s statement, the reasons for their divorce were several reasons including Bill’s questionable friendship with Jeffrey Epstein and his two decades old past affair with a staffer.