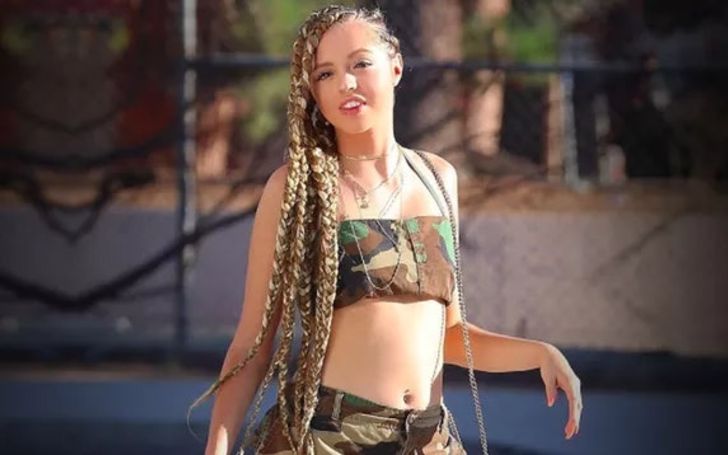 Woah Vicky is an American model, Instagram star, and rapper. Well, like any other celebrity, Woah is often a subject in the media for several reasons, including her boyfriend, romantic relationships.

Also, back in 2018, Vicky got into a controversy after using the word “ni*ger” in some of her videos. Here, we will unravel all the details about the 20 years old model.

Who is Woah Vicky Boyfriend?

It looks like Woah is dating her boyfriend, Deivys Nicola, aka D Rock. Like Woah, her boyfriend D Rock is also an Instagrammer and a musical star.

The couple hasn’t mentioned their future plan as lovebirds. Further, they haven’t talked about the seriousness of their relationship, however, we can see their relationship growing strong every day on Vicky’s YouTube vlogs where she often refers to her beau as her man.

The reported lovebirds first came together in Woah’s March 17 vlog, where the two flirtatiously made comments about each other and finally ended up calling each other boyfriend and girlfriend.

Later, Woah even posted a selfie of them, calling D Rock her boyfriend. On the other hand, D Rock also posted Woah’s photo on his Instagram, referring to her as his girlfriend.

It didn’t end there, Woah and her alleged boyfriend were seen together on many of her YouTube vlogs, where they seemed pretty comfortable together.

She Dated Virgin JJ in the Past

Vicky seems to have found a new boyfriend, but before she found a new man, she had a pretty long-term relationship with a fellow Instagrammer Virgin jj, aka Lil Rot, aka, Papii jj.

The duo was reportedly in a relationship from 2017 to 2018. The two were pretty vocal about their affair and often made posts with JJ on her Instagram.

Having started dating in the beginning of 2017, Vicky and JJ had a short term conflict in their relationship, which they sorted out pretty soon.

As of 2020, Woah and Virgin are good friends and have been collaborating for their YouTube videos as well. They recently collaborated for her vlog that was uploaded on May 22, 2020.

Besides, Vicky was linked with Hakeem Newkirk, a fellow social media personality and artist. He is currently dating Shayy Dee, whom Vicky considers as her sister.

Woah Vicky Claims She is Black

Like we mentioned above, Woah got a huge hype after notoriously using the word “nig*er” in some of her videos. In fact, she even claims that she is not pure white in contrast to her appearance.

The model even insisted that she is black in a now-deleted post on her Instagram. However, all her claims were put to rest after the police mentioned white as her ethnicity in the arrest report.

She was reportedly arrested back in February of 2018 in a local North Carolina mall for allegedly hitting a police officer.

Video: On Spot Clip of Woah When Being Arrested by the Police

Hey guys it’s jj sister @nikki__kitty well basically what happened was the police got mad because some fans wanted to take a picture with Vicky . Then they cuffed her , but jj wasn’t there at the time or moment. When he arrived he saw his girlfriend Vicky getting tackled to the ground.. then he was arguing with one cop and the cop kept putting his hands on him then some security guards tackled him to the ground for no reason 😢. He didn’t touch the cop at all as you can see in the video . My family are about to pick both of them up from jail , luv u jj and Vicky it will be fine 😰🤞🏼🙏🏽

Amid all the controversies about racial discrimination, Vicky too has stood up to support the Black Lives Matter movement.

“I understand that I will never understand. However, I stand.”

She Is Popular on Social Media

As a social media personality, Woah is popular on almost all social media platforms. As of August 2021, she has over 3.1 million followers on her official Instagram account that goes by the name “imwoahvicky.”

Similarly, on her self titled YouTube channel, her subscribers exceed 1.14 million. Well, her YouTube vlogs mainly feature her daily life.

Likewise, she is also active on TikTok, with over 7.1 million followers and over 208.5 million likes on her videos.

Vicky’s father, Steve Waldrip, is a thriving local real-estate business person, whereas her mother, Carla Johnson, is a housewife. As for a fact, their parents never got married.

Vicky also has a sibling, a sister who lives in New York and is reportedly ten years older than her.

Talking about her education, she was homeschooled by her father initially and later studied at Marietta High School. Similarly, she received her higher education at Penn Foster High School.

As a matter of fact, Woah Vicky calls rap artist, Shayy Dee her sister, though they are not biologically linked.

Who Is Presley Elise? Inside Her Personal And Professional Life