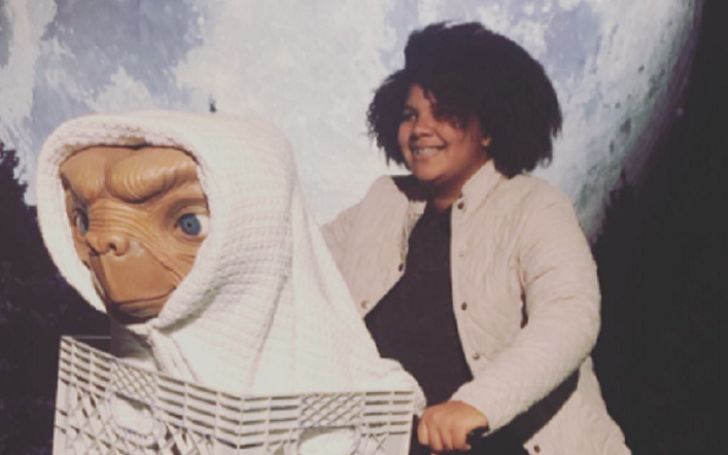 Wynfrey Crews is a star kid who has been in the limelight as the daughter of Terry Crews, a football linebacker-turned-actor. Over the period, her father Terry has worked in dozens of hit movies and TV shows, most famously in Fox and NBC sitcom Brooklyn Nine-Nine. On the other hand, Wynfrey’s mother Rebecca King-Crews is also an actress and singer.

Like her parents, Wynfrey herself appears to be interested in show business. She appeared in her family’s reality TV show The Family Crews from 2010 to 011, sharing the screen credit along with her parents and siblings. Prior to the show, Wynfrey also performed in a few theatre projects.

Well, the following article will include several other unknown facts about her including Wynfrey’s appendectomy, upbringing, and more.

Born in the year 2003, Wynfrey’s age is 19 as of 2022. She celebrates her birthday on 5th February. In Feb 2020, her proud father Terry posted a beautiful photo of his daughter holding a bouquet of yellow roses on the occasion of her 17th birthday. And his caption was,

“A joyous and happy 17th birthday to my beautiful baby girl Wynfrey! I love you!”

Similarly, the following year, on her 18th birthday, her big-sister Azriel shared an adorable photo of her with the caption,

“I know you’re officially an adult now, but I’ll always cherish our early years together. Wynfrey, you are intelligent, clever, hilarious, talented, sweet and spicy. I love you so much and I’m so proud of you. Happy 18th birthday my lovely sister.”

We have already mentioned that Wynfrey is the daughter of renowned actor Terry Crews and his wife of several years Rebecca. Both of her parents are quite successful in their own way. While her father is one of the most recognized faces in Hollywood, her mother also has a good career as an actress and singer.

Rebecca, a Western Michigan University graduate is now the singer and songwriter at a gospel singing group Chosen One.

How Long Have Her Mother and Father Been Married?

Her parents Terry and Rebecca are married since July 1989. It’s been over three decades since they walked down the aisle and their marital relationship is still pretty strong.

The two first met when Wynfrey’s dad was a college sophomore in the late 80s. And they tied the knot two years after their first encounter.

Despite the fact that the duo is still leading a happy married life, their relationship once hit a rough patch all because of Terry’s bad habits. It even led Rebecca to abandon him at one point.

Fortunately, everything settled down pretty soon between the couple.

Her Upbringing and Ethnicity

Being the daughter of such a successful actor, Wynfrey with no doubt had a healthy upbringing. Besides, her ethnicity is African-American and her nationality is American.

However, the details about Wynfrey’s school and college are still unavailable.

Wynfrey Crews Grew Up With Her Three Sisters and One Brother

Wynfrey has two biological sisters named Azriel Crews and Tera Crews as well as a brother Isaiah Crews. Born in June 2005, her younger brother Isaiah is also an actor like his father. He appeared in TV shows like Side Hustle, The Family Crews, and a few more.

Besides, Crews also has an older half-sister named Naomi Burton-Crews from her mother’s past relationship.

Her sister Azriel is also an actress and real estate agent

Like her father, the 31-year-old Azriel is building her own path in the field of acting. In addition to her appearance on The Family Crews, the actress appeared in several other TV series including Crashing, High Maintenance, Younger, and This Is B.S.

Prior to her burgeoning acting career, Wynfrey’s big sister Azriel is also a makeup artist and an active real estate agent. She currently works at Casa Blanca.

Is Wynfrey Crews also interested in acting? Her theatre work and fashion show

Terry Crews’ daughter Wynfrey landed her first professional acting role in her family show The Family Crews. She featured in the project from 2010 to 2011 along with her father Terry and the rest of the family members. The series which documents the life of her actor father ended after its two seasons in 2011.

In addition, while at school, the star kid used to play in a theatre. In March 2019, Wynfrew also posted her photo from one of her theatre performances on the occasion of world theatre day.

Additionally, in March 2012, Terry Crews’ daughter also appeared in a fashion show. Her doting father Terry uploaded her video on his Youtube channel, cheering for his little girl.

Unfortunately, the year 2017 for the actor Terry began with a bit of complication. On 1st Jan of the year, Crews posted a photo from the hospital and wrote that his baby girl Wynfrey had to have an emergency appendectomy. At the time, they were on a family vacation in London. And the actor wished a happy new year like this,

“Nothing says goodbye 2016 like an emergency appendectomy on my lil baby girl Wynfrey while on vacation in London! She is doing great and recovering well! Here’s to more life and health in 2017!! HAPPY NEW YEAR!!”

Nevertheless, the exact amount of her net worth is yet to estimate. In the meantime, her father Terry has a fortune of $25 million as of 2022.

Yes, Wynfrey is active on Instagram under the name lovely_blossom_skeleton. She has over 1k followers on her Insta as of 2022.