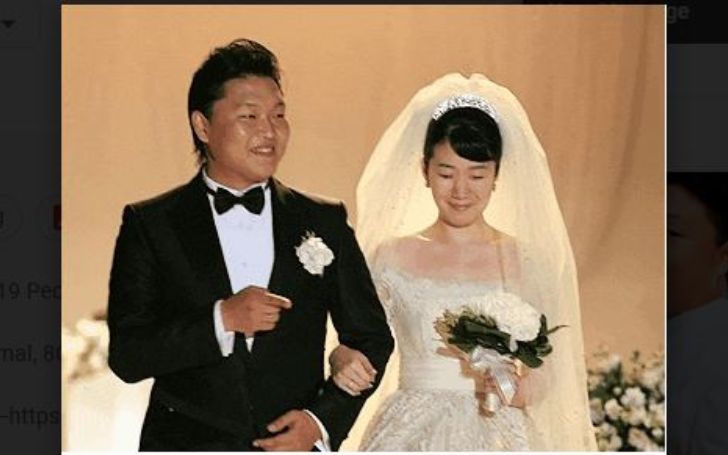 Yoo Hye-Yeon is a South Korean children’s educator and a businesswoman who is better known as the wife of a Korean singer, rapper, songwriter, and record producer, PSY (Park Jae-sang).

Yoo’s husband, Psy is known domestically for his humorous videos and stage performances, and internationally for his hit single “Gangnam Style,” the first-ever music video to hit a billion views on Youtube. PSY was the man who had the whole world doing outlandish steps and mimicking cowboys on dance floors.

However, little has been heard of the singer outside of his native South Korea since, and even far lesser is obvious about his wife, Yoo Hye-Yeon. So what has happened to him and his spouse in the years since launching the catchiest song of the decade? Know all about his recent doings though with extra focus on his wife, Hye-Yeon; her own life as a whole, her origin, career, and more.

Yoo was born the same year as her husband in 1977. While not much about her mother is known, her father, Yoo Jae-Yeol used to be the head of the Makjang Temple.

Yoo’s father reportedly was also the teacher of Shincheonji’s Lee Man-hee and the president of the Shincheonji Church of Jesus, the Temple of the Tabernacle of the Testimony (Shincheonji) in the 1960s.

Yoo Jae-Yeol, however, whilst being head of the Makjang Temple would involve himself in the case of fraud.

He had said to the followers that the world would end on November 1, 1969. The apocalypse, however, didn’t happen. The prosecution investigation later revealed about 20 people died from malnutrition because there was nothing to eat after the police arrested Yoo Jae-Yeol.

The dead had reportedly believed in his apocalyptic theory and sold all their property and moved to Siheung, Gyeonggi-do, the land of salvation. Yoo’s father apparently also misused the donations of the believers for his own entertainment expenses.

Later, the President of the Shincheonji Church, a member of the Korean Christian Church of the Tabernacle, Lee Man-hee, and other members of the congregation sued Yoo Jae-Yeol on more than 40 charges, including fraud and blackmail in 1971.

Four years later, the court arrested and convicted Yoo Jae-Yeol in 1975. He then spent the next two years and six months in prison and four years of probation in the second trial. After that, Hye-Yeon went to the United States and returned to Korea to set up a construction company and earned tens of billions of won.

Psy’s wife, Yoo is a graduate of Yonsei University where she majored in cello.

She now runs her own children’s education business in her native South Korea in Suwon Gyeonggi-Do.

How Did Yoo Meet Her Husband PSY?

Yoo met Psy through a mutual friend, reports Korea Broadcasting System in Feb 2003. Psy once said how pretty it was to him the way his wife was eating the first time he met her.

Jae-Sang said the way Yoo took care of him after they started a relationship made him feel like she was his girlfriend. The Seoul-born singer once revealed his wife has a personality that is ‘the opposite’ of him, who apparently has been outgoing and active since he first met her.

She reportedly is also a very peaceful friend. During one of the press conferences amidst his wedding, Psy said he hadn’t dated anyone for more than 100 days before he met Yoo.

He also stated how his selfish, hot-tempered, and suddenly very angry mood were the possible reasons for his failed relationships. The Boston University graduate at the time explained it probably was because of his extreme type B man.

His wife on the other hand was a priest and a typical type O, at the time. Psy admits because of his untidy past, the Hye-Yeon aides were very disapproving of him in the beginning.

Yoo married her then-boyfriend of three and a half years, Psy in Oct 2006. The former army man’s bride was then a first-year cello major at Yonsei University. The wedding took place at the Vista Hall of W Hotel in Gwangjang-dong, Seoul on the 14th at 5 pm.

During a press conference just before the wedding, Psy said, “Today, I finally become a celebrity.”

The PSY from Psych World’s singer and his wife separated the nuptials into two parts, 1 and 2. In the first part, former Seoul National University president Jeong Un-chan, who was close to Jae-Sang’s parents, officiated, and announcer Son Beom-soo hosted the wedding. In the second part, Psy performed for the bride.

The now 44-year-old rapper sang the title song ‘Celebrity’ of his 4th album. He apparently made the song for his bride, Yoo Hye-Yeon.

“I was going to sing it to only one person, but I thought the song was good, so I decided to give it to many people. But for today, I want to be the only celebrity,”

Psy added the song he wrote for one person went on to receive many people’s loved but for “today, I think I will become a celebrity of only one person.”

After the marriage, Psg and Yoo welcomed two daughters, twins and the family reportedly split their time between Los Angeles and South Korea.

Psy once while appearing on a TV show said his wife Hye-Yeon treats him differently on and off the stage.

She treats the off-stage person Park Jae-sang and the singer Psy as completely different people,

Explaining the behavior of his wife towards him as if he is two different men, Psy said Yoo practiced nonownership of her husband. He added that Hye-Yeon doesn’t even bother to call him when he is late-out performing or busy with something else.

Apparently, of this stance of Yoo towards her husband, she is famous as the court monk of the wife’s world among the south Korean tabloids.

Yoo reportedly is also responsible for the success of Psy. It was Hye-Yeon who encouraged her artist husband to join the label YG Entertainment in 2010. He then had just come out of his second time mandatory military service.

At the time, Psy agency was experiencing financial difficulties, and he could no longer publish his own songs. Then Psy’s wife, Yoo helped him in signing a contract with his old friend, Yang Hyun-suk, CEO of YG Entertainment. According to an insider, Yoo also has been overseeing her husband’s stage costumes.

Is Yoo Hye-Yeon On Social Media?

Although Psy is very much active on platforms like Facebook and Instagram, his wife, Hye-Yeon, on the other hand, is virtually a nobody on such podiums. Further, the record producer apparently also restricts himself from exposing his wife and children to the world through his Insta or Facebook handles.

What Is Hye-Yeon’s Husband, PSY’s Net Worth?

Hye-Yeon’s multi-Platinum certification winner husband, Psy has been estimated to have a net worth of up to $65m following years of plays, streams, YouTube hits, endorsement deals, advertising deals, and his own business.

His 2012 hit Gangnam Style has generated more than $8 million in revenue through YouTube alone. Further, he also has several properties in his home country and in the US as well. Speaking of which, the South Korean musician and dancing phenomenon and his wife Hye-Yeon back in Jan 2013 bought a place in a 1989 Blair House condo in Westwood for $1.249 million.

And in Dec 2016 the couple sold the very condo for almost $2million. Also, someone who reportedly is a millionaire is Yoo herself as she apparently owns a thriving business in South Korea and is also an heir to her father’s multi-million dollar construction company.

What Is PSY Doing Recently?

Following his departure from YG Entertainment in 2018, Yoo’s husband, Psy founded his own company, P Nation, in 2019.

The American Music Awards winner signed his first artist Jessi on January 25, 2019. He has since signed fellow local artists such as Hyuna and Dawn, Crush, and Heize.

On April 26, 2021, there were reports stating Psy and Park Jin-young, the founder of JYP Entertainment were going to collaborate together to form a new boy group – each in Loud, which premiered on June 5, 2021, on SBS.

Then in 2022, Psy did his first concert in Dubai as part of the Expo 2020 on Korean national day event. The same year in April, Psy released his ninth studio album, Psy 9th, with its lead single “That That” featuring Suga of BTS.