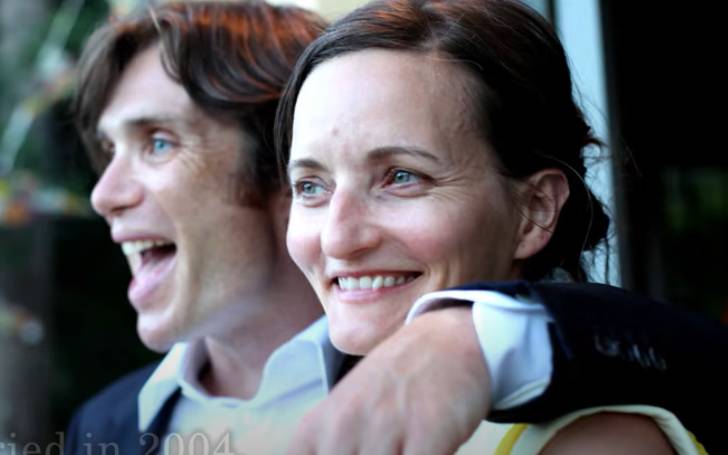 Yvonne McGuinness is an Irish native who is most popular as the wife of Cillian Murphy; an Irish actor and musician. Her husband has appeared in many significant movies and dramas like Intermission (2003), Inception (2010), A Quiet Place Part II (2021), Peaky Blinders, and more. Apart from being a celebrity spouse, McGuiness is also a visual artist. The multi-talented woman has likewise worked as a producer for several short films such as This Is Between Us, Charlie’s Place, Procession, and The Well.

As for her love life, Yvonne has been married to her husband for decades now and also shares two sons together. This is also the first marriage for both of them and is leading a happy marital relationship since their wedding. So, when did the couple meet? Where are they now?

Yvonne McGuinness is an Irish Native: Her Parents and Age

McGuinness was born on 12 October 1972 and is 49-year-old as of 2022. She was born and brought up in Kilkenny, Ireland. Talking about her parents, Yvonne was born to her father Gay McGuinness.

Her dad Gay has been in the business of the vineyard since 1990 and also is the owner of Domaine de Notre Dame des Anges vineyard in France. Similarly, her uncle John James McGuinness is a Fianna Fail politician. However, the details about her mother are still missing.

Besides, her nationality is Irish and belongs to the Caucasian ethnicity.

The celebrity wife completed her primary and secondary education in her native nation but later shifted to London for further studies. McGuinness then joined Crawford college in Cork for her bachelor’s.

After attaining a bachelor’s degree in Arts, Yvonne enrolled in the Royal College of Art to pursue her dream of being an artist. She later successfully graduated with a master’s degree with Honor in Arts.

Yvonne Is The Wife Of Cillian Murphy: Their Marriage Details

Yvonne and Murphy first came across each other in 1996 during their 20s. When Cillian met the love of his life, the actor was still a rock star and doing one of his band’s shows, The Sons of Mr. Greengenes. The husband and wife instantly fell for each other and started dating.

After dating for about 8 years, Yvonne McGuinness eventually decided to say “I do” to her long-time boyfriend Cillian Murphy in mid-2004. The lovebirds celebrated their wedding in London in the presence of their close family members and friends. The duo is now married for almost two decades and is still going strong with no signs of conflict or separation.

McGuinness Has Two Children With Her Husband

Yvonne and her husband Cillian have celebrated their marriage for more than two decades now. The husband and wife’s blissful relationship has added more happiness with the arrival of their two sons; Malachy Murphy and Aran Murphy.

Malachy is the elder son who was born on December 4, 2005, a year after his parent’s nuptials. Likewise, Yvonne and her hubby welcomed their second child Aran in July 2007. They both were born in England and later taken to Ireland by their mom and dad so that they could know the culture of their native land. In fact, his father also said,

“We wanted the kids to be Irish. They were sort of at that age where they were pre-teens and had very posh English accents and I wasn’t appreciating that too much! So we decided to come back.”

Yvonne Lives In Dublin With Her Family

As we mentioned above, the Inception actor and his wife moved to their born land after they welcomed their two children. So, the lovebirds currently reside in Dublin, Ireland. Prior to that, the pair lived in London for decades.

In fact, the reason for them moving there, other than teaching their children the native culture was to be closer to their parents. As the relatives of both Murphy and his sweetheart reside in Ireland, they wanted to be near them. That is why the family of four shifted back to their homeland.

Things You Should Know About Yvonne McGuinness’ Husband Cillian Murphy

McGuinness’ husband Cillian Murphy is an Irish actor who was also the lead singer and guitarist of the rock band called The Sons of Mr. Green Genes. Moving into his acting career, the renowned actor has appeared in many significant movies and dramas such as Intermission (2003), Breakfast on Pluto (2005), Sunshine (2007), Inception (2010), A Quiet Place Part II (2021), and more.

In addition, Murphy has also played in the crime drama series, Peaky Blinders as Tommy Shelby alongside his wife McGuinness. Not only the actor has also won accolades like Irish Times Theatre Award and was nominated for Golden Globe Award.

How Many Wives Has Cillian Murphy Had?

Many people are curious to know about the number of wives the Irish actor has. But we already mentioned above that Murphy is wedded to his one and only wife Yvonne McGuinness and is still with her.

Furthermore, the actor hasn’t talked about his past relationships in the media.

Well, most people are confused and curious if the mother of two was in Peaky Blinders alongside her husband but the answer is no. Peaky Blinders was filmed in Liverpool, England, but by that time, McGuinness had already moved to their native nation.

Also, as the couple already had babies, Yvonne used to stay at home looking after her children. On the other hand, her hubby Cillian appeared in the series, playing the character of Tommy Shelby. He stayed in a rented apartment in Liverpool throughout the shooting. But the actor would fly back to his family when filming wrapped each season.

According to Yvonne’s website, she is a Dublin, Ireland-based artist. She is an accomplished artist whose work encloses film, performance, sculptural, and textile elements, sound, and writing.

Following her interest and profession, McGuinness has also produced short films such as This Is Between Us, Charlie’s Place, Procession, and The Well to name a few. She even received a contract from Draiocht to collaborate with the Fingal County Council Arts Office in 2017.

The fifty years old is still active in her profession, handling her family life side by side. She is busy with her projects and ready for the upcoming hustle in her life too.

What Is The Net Worth Of Yvonne McGuinness?

Apart from being the wife of the Hollywood star Cillian Murphy, Yvonne has also established herself as a successful visual artist. Despite having a luxurious life, she chose to work and earn for herself.

As of 2022, her net worth is estimated to be more than $1 million. She has amassed her fortune with her art career and short films. She is now living a prosperous life with her husband and children.

How Rich Is Her Husband Cillian Murphy?

Her spouse Murphy is one of the veteran actors in Hollywood, making appearances in prominent movies like Inception, Batman Begins, Intermission, and many more. He is a multimillionaire with total assets of $20 million.

The Irish native prefers to live a private life away from the public eye. Even though she has an account on Instagram and Twitter by the name “Yvonne McGuinness,” both of them are private.

Not only her but also her husband, regardless of being a popular media personality, has no social media accounts. They both keep their personal life private and don’t open up much about their family even in interviews.