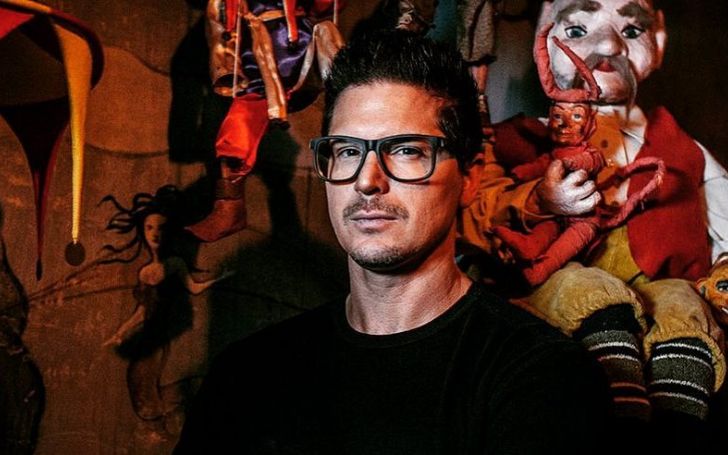 As a TV personality, Zak Bagans began hosting his documentary show Ghost Adventures in 2007, which began its broadcast on Travel channel in 2008.

On 2nd April of 2016, he began another show on Travel Channel named Deadly Possessions. In the show, he gathered artifacts primarily from his haunted museum in Los Angeles.

Zac was born on April 5, 1977. He was born to father Larry Bagans and mother Nancy June Knapp. His father worked as the salesman at the Quaker Oats division of PepsiCo.

Likewise, his mother was a visual stylist in Las Vegas and an interior designer by profession.

Zak also has a stepfather, Thomas Knapp, who Nancy married after her divorce with Larry. Moreover, Bagans also has a sister Meredith Bagans Mixer, and a half brother and half-sister Phil Knapp, and Sky Knapp respectively.

He Is Close to Sister Meredith Bagans

Like any sibling, Zak share a strong relationship with his sister Meredith. The two are often spotted together on different occasions, be it family events or professional gatherings.

However, his sister barely make any media appearance and is more of a private person.

Talking of Bagans’ education, he graduated from the Motion Picture Institute in Michigan and thereafter began his journey to become a creator of documentaries.

Well, during his struggling days, he also worked as a part-time wedding DJ before he gained prominence with Ghost Adventures.

As of 2020, Zak is single and not in a marital relationship, but on April 1st of 2014, he announced his wedding with a model named Ashley via a tweet.

In fact, through a tweet, he said he was committed to Ashley and was already engaged. However, the tweet turned out to be an April fool prank.

As per TMZ, Bagans is currently in a relationship with television personality, model, and author Holly Madison.

An insider to the couple told TMZ that the couple became close to each other after Holly visited Bagans’ haunted house in Las Vegas and soon began dating.

However, as far as Zak and Playboy model Holly is concerned, they have maintained low key about their relationship. So far, they have not admitted their love affair.

Holly Marriage with ex-husband Pasquale Rotella Ended in a Divorce

Also, the rumors of their romance started 4 months after Madison divorced her husband Pasquale Rotella.

Madison married her husband in 2013 and divorced him in 2019. She also had two children with Pasquale, Rainbow Aurora Rotella, Forest Leonardo Antonio Rotella.

Bagans Love Affairs in the Past

Before the Deadly Possessions star began dating Holly, he had been in a few other unsuccessful relationships.

In 2010, he had a relationship with model Christine Dolce, but sadly Dolce died in February 2017.

Likewise, he was also linked to Marcy DeLaTorre, but Bagans and Marcy never admitted their relationship.

As of 2020, Bagans has a net worth of $30 million. He makes most of his money from his appearances in TV shows like Deadly Possessions, Ghost Adventures, and many more.

Is Zak Bagans Married? The Truth About His Proximity With Holly Madison