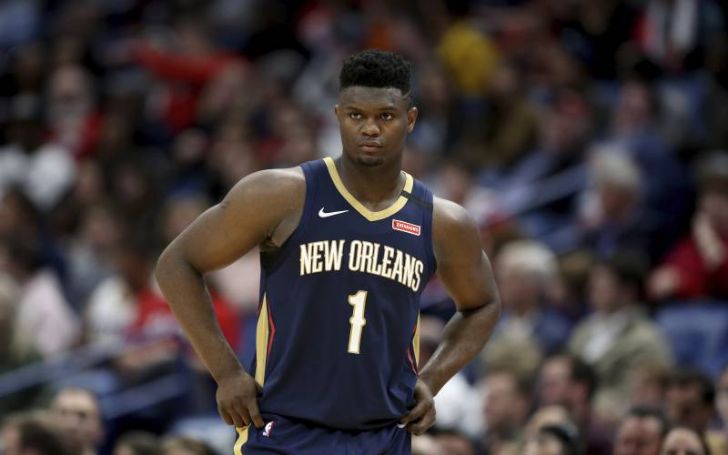 Zion Williamson has quickly gained a lot of fame after he was drafted to New Orleans Pelicans back in 2019. He is a big NBA star now but he wouldn’t be here if it wasn’t for his mother and step-father’s support.

Zion’s biological father and mom divorced earlier on. His mother later exchanged vows with his step-dad with whom he has a deep bond.

Besides, the North Carolina native once dated a girl from his high school, but it seems as if though the couple has called it quits.

Find out about Zion Williamson’s family including mom, dad, and other intricate details here today!

Who is Zion Williamson? Age, Height, and Weight

Zion Lateef Williamson was born on July 6th, 2000 in Salisbury, North Carolina. After the demise of his grandmother, his family relocated to Florence, South Carolina.

Ever since the name Zion Williamson popped into the radar, the most talked-about thing was his athleticism. Towering at a height of 1.98 meters/6ft 5inches, and weighing 285 pounds/129 kg, the stats themselves speaks a lot.

Who is Zion Williamson Parents? Father was a Defensive Lineman

For many, Zion has hit the genetic lottery and it is in fact quite true. Both of his parents were college-level athletes.

His dad, Lateef Williamson played as a football defensive lineman at high school and college. On the other hand, his mother, Sharonda Sampson was a sprinter who later served as a Physical Education Teacher in middle school.

When Zion was born, his maternal grandmother advised Sharonda that she should give him a unique name and so the name Zion came to be.

For those of you who don’t know, his name comes from Mount Zion a biblical location in Jerusalem.

Parents Divorced when he was 5: Step-Father helped him a lot

Zion’s parents divorced when he was just five. Later down the line, his mother re-married a basketball player, Lee Anderson, who became Zion’s step-dad. In many interviews, he mentioned that during the off-season, his father used to train him.

Zion’s step-father, despite the pandemic and lockdown, helped him train. He said, “Me and my stepdad just found different ways to stay in condition,” the Duke product said. “Wherever we could find it. On court, off court. Just try to find it. I feel like I’m in good shape right now. It was just me and my stepfather. I got to get on the court every day.”

From his mother’s second marriage, he has one step-sibling name, Noah Anderson.

His step-sibling was once mistaken as Zion’s son. Yeah, you heard it right! When Noah was attending one of Zion’s games, there were a lot of speculations that the small kid is his son. Later on, it was found out he is his brother.

Zion credits his Success to Mom

Zion might be a big sports star but if it wasn’t for his mother then Zion wouldn’t be here. This is why he attributes all of his success to his mother. In an interview with Esquire, he mentioned that his mom was the hardest coach he ever had.

He also added she was quite tough on him and used to rant at him a lot about life whenever she felt like he is not giving his all. Maybe it was her dedication that made him the player that he is today.

Cheers to all the super moms out there!

While growing up Zion had an early intention of becoming a great basketball player. Apart from Basketball, he also played Soccer and American Football. He used to play as a quarterback while playing football.

While attending middle school, his mother Sharonda personally coached him. His mum worked hard for her son and soon he played in several tournaments. Sometime later, he joined his step-dad in order to improve his point guard skills.

What is Zion Williamson Net Worth?

At the moment, Zion’s net worth stands at $5 million

He played his college basketball at Duke Blue Devils and later got drafted to the Pelicans. In a short amount of time, he won several accolades like the Karl Malone Award, ACC Rookie of the Year, to name a few.

An athlete involved in the NBA has everything, fame, money, and power. But despite all that one cannot afford to have multiple affairs. It is all because of the grueling game sessions, season by season.

On the contrary, Zion has been involved in a few affairs outside the court. His first being with his high school sweetheart named, Tiana White.

The lovebirds used to attend the same high school, Spartanburg Day High School. While he was a senior and she a junior, romance apparently kicked off between the two and they even went on a prom together.

But ever since then, the duo seems to have called it quits due to the long distance between them.

In 2019, Zion shared a picture with Peyton List on his Instagram account. His post soon became a hot topic when it was found that not only is Zion single but she is also single after breaking up with Cameron Monaghan.

After some time, there was an incident when Zion sent a thirsty Snapchat to a UNC cheerleader and asked if she would want to sleep with him. The situation suddenly turned weird after the girl even posted the picture he sent to her.

Here’s a full outlook of the event!

Well, all has ended at the moment and Zion never commented about it.

Is Zion Williamson dating anyone in 2020? What about his Affair with Tiana White?