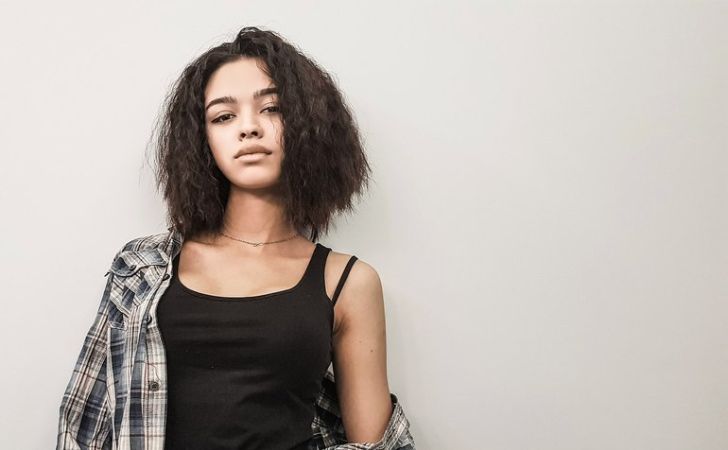 Sabi, born as Jenice Dena Portlock, is an American singer, songwriter, dancer by profession. Likewise, she is also an actress known for her work in the 2015 short horror film Requiem for Remorse.

Formerly a member of the girl group The Bangz, Sabi is currently signed with Warner Bros. Records. The singer is active on social media including Twitter and Facebook as well.

Well, how is her life a part of her career? Is she married or dating a boyfriend? All the details about the Champagne singer Sabi.

Sabi Wiki, Siblings: Her Parents Separated When She Was a Kid

Sabi, aka Jenice Dena Portlock, was born on November 24, 1987, in Inglewood, California. Born in a Spanish and English language speaking household, Sabi’s mother is a Salvadoran whereas her father is an African-American.

Sabi was quite young when her parents separated for undisclosed reasons. Well, following the split of her father and mother, Sabi along with her younger sister chose to stay with her father because his house had a cable connection.

As she stayed at her father’s place, she was hugely influenced by music. In fact, she has opened up multiple times that as a kid she loved watching MTV and would spend her weekends staying glued to the TV screen.

In one of her interviews, she has candidly said that she loved watching artists like Michael Jackson, Prince, and Sade.

I remember watching the Michael Jackson: Moonwalker video over and over and trying to pick up Michael’s moves

Well, it was during this phase of her life, she developed an appetite for pop music, songwriting, and acting as well. Her interest in it rose to the extent that she would choreograph her younger sister and drag her together to perform in front of the family members.

To pursue her interest in music and theatre, Sabi enrolled in the theatre when she was still in middle school. She finished her graduation from Westchester Senior High School in 2005.

Sabi professionally got into performing arts in 2008, appearing in an independent short film, The Smallest River in Almirante.

Moreover, she also appeared in commercials for big brands like Pepsi, Universal Studious, and ABC family. Meanwhile, she also finished her education at California State University Long Beach, majoring in communication in 2009.

While still at college, Sabi also mimicked other singers and worked on her vocal technique to perform better. Concerning the same, she once stated,

No matter who it was, Justin Timberlake, Brandy, or Alicia Keys, I could mimic exactly how they sounded. That’s how I got comfortable with my voice.

Sabi made her professional entry into the music industry in 2009 when she was approached by the production team of The Co-Stars. At the time, they were looking to launch a female duo.

The band released two singles Boys With Tattoos (We Jerkin’)” and “Found My Swag, featuring New Boyz. Both the songs became hugely successful hitting over a million views on YouTube, earning the band national recognization and MTV exposure.

Unfortunately, Sabi’s journey with her band member Ella Ann came to an end after Ann injured herself in a car accident. However, owing to her energy and enthusiasm for work, Warner Bros. Records offered her to continue her career as a solo artist.

Sabi, aka Jenice Dena Portlock, released her first song as a solo artist on April 4, 2011, Goodnight, a song from her debut album. Shortly after this, she released Wild Heart.

Later, she featured in Sabotage, a music video by Wale, an American rapper. Similarly, she also became part of Britney Spears’ song “(Drop Dead) Beautiful” and the Cobra Starship single “You Make Me Feel…,”

Her other popular single includes Champagne, Cali Love, Glow released in 2012, 2013, and 2016 respectively.

Apart from her music videos, she has also featured in a few movies. She has appeared in the 2015 crime thriller movie Requiem for Remorse. Prior to this, in 2012, she was announced to be the host of a web series Found My Swag.

Talking about her boyfriend and datings, Sabi states herself to be single on her Facebook profile. There are also rumors that Sabi is married but it is far from the truth. In fact, she has not announced any sort of wedding plans. However, we hope to see Sabi with a husband soon.

She is active on Social Media