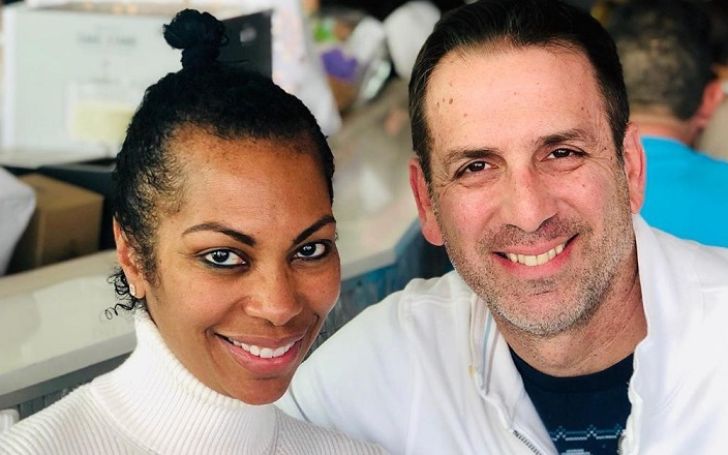 Multiple prestigious award-winning Harris Faulkner is a doting mother of two children with her husband. It’s been years since the two are still leading a successful marriage life while simultaneously chasing their career goals.

But who is Harris Faulkner’s husband? Take a look at the adorable love story of Faulkner and find out how it all began!

Who is Harris Faulkner married to? Their Happy Relationship

Harris Faulkner tied the knot with Tony Berlin on 12th April 2003. Faulkner and her hubby organized their wedding ceremony near Berlin’s hometown of Tucson in Rio Rico, Arizona. The two exchanged their vows in front of their families and friends.

Their married life has since been filled with joys and happiness. On the occasion of their 13th anniversary, Harris posted a loving photo with hubby that also features several other guests at their wedding.

Although their marriage is biracial, the two are leading a pretty good matrimonial relationship for years now.

How did Harris and Tony first meet?

The two first met in the late 1990s when Berlin moved to Minneapolis, Minnesota in 1998 and started working for CBS News. Faulkner was already there, working with the ABC affiliate as an evening news anchor.

After two years of marriage, the lovebirds went to New York City. She then joined Fox News and Tony started working for CBS station located on the west side of Manhattan.

The couple is blessed with two children

Harris and her husband Tony are proud parents of two gorgeous daughters. She gave birth to their first child Bella Berlin in 2007. The two welcomed their second daughter Danika Berlin in 2010.

They consider Arizona as the finest place to have their daughters baptized. Sources suggest their younger daughter Danika was baptized in Tubac, Arizona.

Faulkner said “It’s a Blessing” to have biracial children

Back in October 2019 talking to People, Harris Faulkner widely talked about her mixed family, especially focused on her two daughters who look too different from each other due to their parents’ mixed marriage.

As a doting mother of two biracial daughters, Harris told, “It’s beautiful for any parent to get the opportunity to have those loved ones in our lives”

Faulkner told that her hubby Tony also deserved huge credit for his major role in the family, “I married an amazing guy. I couldn’t do it without [him]”

Both kids play basketball and tennis. They also practice gymnastics. Due to her hectic schedule, Harrish couldn’t attend her daughter’s competition which she often regrets. She said, “I had guilt because I couldn’t see every game and I missed a competition with Danika, and it was hard”

Faulkner also told that her family has huge respect for authority.

The family of four mostly lives in their New Jersey House

Harris and her family spend the majority of their time in their house located in northern New Jersey. In 2017, Closer Weekly also featured their house. The 4,300-square-foot property has four bedrooms and four bathrooms as well as a rooftop deck. It is located near the Hudson River.

Furthermore, the couple also splits their time in their other home which is just about 20 miles north of the Mexico border. The two also frequently appeared with their children spending their quality time together in several beautiful places.

Besides, Faulkner has had an intimate connection with her parents. Her mother passed away in 2016 and still has a healthy respect for her late mom.