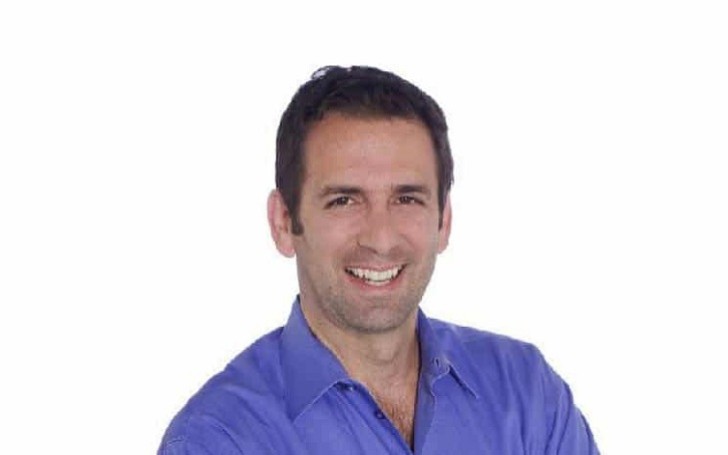 Tony Berlin is widely popular among people being the husband of prominent journalist Harris Faulkner. Berlin also spent over a decade in the same field before making a transition into the world of public relations.

Today we’re going to have an insight into his life and find out about Tony’s family, ethnic background, and more in the following article!

What does Tony Berlin do for a living? Is the Founder of BMR

Tony Berlin is a former broadcast journalist who currently serves as a founder and CEO of the PR company Berlin Media Relations.

BMR is a media relation company which generally builts strategies catering to their client’s publicity needs. Tony himself has a lot of experience in the media and knows how to effectively pitch their clients to the media.

Berlin also worked at the CBS network from 2005 to 2006 as a Field Producer. After quitting the journalist field, he shifted to public relations. He crafted his prowess working as a media relations manager for Padilla Speer Beardsley. He spent his next three-year at Credit.com as the director of media relations.

During his association with Credit, Berlin interviewed several financial experts too.

After his graduation from Occidental, Tony landed his first job as a producer with Cox Broadcasting. He later began working as a reporter and anchor for CBS O&O station WCCO-TV. He subsequently became a part of several other stations such as WHIO-TV CBS, WSLS-TV NBC, and WJCL-TV ABC in Savannah, Georgia.

In 1998, Berlin made his move to Minneapolis and started working with CBS News. He became a reporter for the CBS affiliate and worked for the station for seven years in Minneapolis. He also spent a year working as a field producer for WCBS.

Several tabloids report that Tony’s parents divorced when he was a child. He grew up in Tucson.

After the divorce between his mom and dad, Tony’s mother brought him up all by herself. She later re-married and Tony shares a healthy relationship with his step-father.

For instance, the stepfather-stepson duo attended a game together last year.

“Just last winter I caught the UNLV and Long Beach State games at McKale with my stepdad.”

Berlin attended Amphitheater High School, where he also played basketball. He later enrolled at Occidental College, a liberal arts school in Los Angeles. He earned a degree in political science from college in 1989.

In 1992, Berlin joined the American University School of Communication in Washington, D.C., and studied public policy and journalism. He graduated from the Poynter Institute in 2002.

Tony Berlin tied the knot with Harris Faulkner on 12th April 2003, in Rico, Arizona. The two are leading a blissful married life ever since.

Back in 2016, Harris commemorated her 13th anniversary by posting a photo from their wedding day.

They are also proud parents of two children. They welcomed their first child Bella Berlin in 2007. Their second daughter Danika Berlin was born in 2010.

Tony and wife Harrish cite Arizona as the best place to have their kids baptized. They themselves baptized their younger daughter Danika in Tubac, Arizona.

In the late 1990s, Berlin came across his wife Harris Faulkner for the first time. He was working for the CBS affiliate while Faulkner was the evening news anchor for the ABC affiliate in Minneapolis at the same time. Sources suggest the two were first introduced by mutual friends.

In 2005, they both moved to New York City. Upon moving, Berlin started working with CBS station located on the west side of Manhattan while Harris joined Fox News.

Where does Tony Berlin live?

Berlin and his family primarily live in their house located in northern New Jersey. In 2017, Closer Weekly also featured their 4,300-square-foot house. It boasts four bedrooms and bathrooms.

Tony Berlin has a $1 million net worth. He currently makes a major portion of his wealth from his own company Berlin Media Relations.

Besides, his journalist wife Faulkner possesses a total fortune of $6 million. Her annual salary is over $2 million.