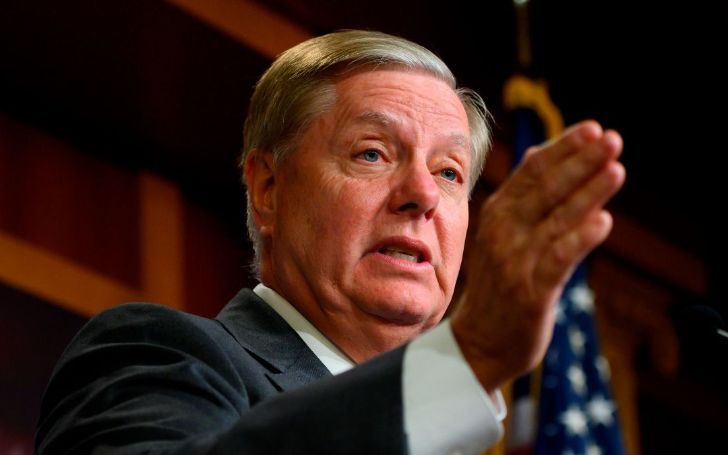 Lindsey Graham is an American politician who is currently the active senior US senator from South Carolina. Besides, he is also the Chair of the Senate Judiciary Committee.

Well, that’s one aspect of his life, but his relationship is the other part that has been a subject of curiosity in the media.

Who is Lindsey Graham’s wife? He was once close to getting married but why he didn’t commit? Find out all the answers here including the answer for Graham’s gay rumors. Let’s find out.

Who is Lindsey Graham’s wife? Is he married?

To be precise, Lindsey is not married, which makes it obvious that he does not have a wife.

But how can we be so sure that Graham is unmarried? At 64, there have been no reports of his marriage, neither has he ever mentioned his spouse or wedding in any of his interviews, which makes us believe that he is not married yet.

Though he has not tied the knot yet, he has been in a few relationships. In fact, one source reveals that he was very close to getting married. Let’s discuss it below.

Graham was very close to getting married in his 20s

Lindsey once revealed that he was very close to getting married when he was in his 20s. This happened long before he became a politician, back then he was working for the American Air Force.

Lindsey almost married a woman named Sylvia when he was posted at the Rhein-Main Air Base in Germany. While Graham’s friend married Sylvia’s roommate, he could not marry Sylvia as things didn’t work out between them.

He reportedly didn’t marry her because she could not move from Germany as her mother was very old. Talking to Herald Online, he said.

“Her mother was elderly, and I wasn’t going to stay in Germany. I didn’t think she wanted to come back to South Carolina.”

Why Did Lindsey Never Get Married?

Questions about Graham’s marriage and relationships came in the media after he announced his run for the presidency in 2016.

While he never got to be a president, he did become the subject in the media because of his single status all while during his presidential campaign in 2015.

Well, talking about his decision to remain single to POLITICO, he said,

I’ve been close once early on, [as I was] taking care of my sister. It’s something that I really don’t know the answer to, other than I think it’s OK. At the end of the day, there’s nothing wrong about not being married. Having a marriage and a good family and children is a blessing. But I don’t think I’m a defective person by any means.”

Further, he also added that he has a complete family although he is not married. He referred to his uncle, aunt, and his sister as his family.

You can be single and still have a family. I very much have a family – my aunt and uncle, I try to take care of because they took care of me. There are millions of people who are single. I don’t think they need to answer, ‘Why are you single?’… I don’t think there’s anything disqualifying about being single.

For those who are still curious about the senator’s personal life then he is soon going to publish a book about it. In the book, he will vividly talk about why he never liked the idea of marriage and stuff like that.

Because of his single status, Graham has been rumored of being gay for a long time. In 2018, American comedian Chelsea Handler tweeted a controversial statement regarding Lindsey’s sexuality.

Chelsea wrote a rather provocative and immature message in her tweet of October 12, 2018.

If you’re wondering why Republicans took a sick day today, it’s probably because it’s #NationalComingOutDay. Looking at you @LindseyGrahamSC

Moreover, she had made a similar accusation on Lindsey in early 2018 where she wrote that Graham is being blackmailed to support Republicans because they have a video that may prove him as gay.

Chelsea was highly criticized for her behavior as her tweet somehow showed her homophobic side. One wouldn’t expect such a thing from a person who is an advocate for women’s and LGBT rights.

Right after her tweet in October 2018, Lindsey was stopped by TMZ in an airport and asked for his response, and the response he did. In a calm manner, he said, “I don’t think much about what she says at all. If she wants to live her life that way, that’s up to her.”

He also went on to set the record straight and said, “She knows zero about me. To the extent that it matters, I’m not gay.”

Besides, Lindsey also talked about his sexual orientation in an interview with the New York Times in 2010. He maintained,

“I know it’s really gonna upset a lot of gay men – I’m sure hundreds of ‘em are gonna be jumping off the Golden Gate Bridge – but I ain’t available. I ain’t gay. Sorry”