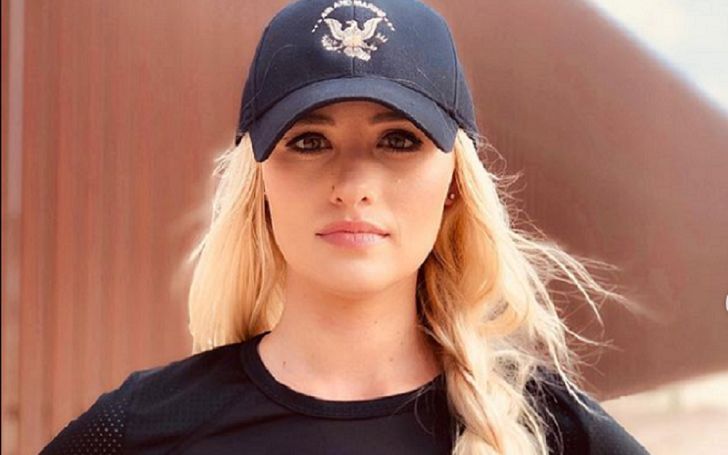 Tomi Lahren is a media personality with multiple roles who currently serves as a talk show host on Fox Nation. She also serves as a contributor to Fox News. Besides, Tomi has made a series of headlines because of her controversial comments including an infamous interview with The View where the host emphasized that women should have legal access to abortion.

In the meantime, Lehren has also been a hot topic in the dating department since a broke up with her then-husband-t0-be Brandon Fricke. The former flames got engaged back in mid-2019.

But, as of now, many people wonder who is Tomi Lahren’s boyfriend? Apparently, several of her fans have also questioned is Tomi married? To know all the answers to the questions, read a complete love story of Lahren from her past relationship with her former Navy SEAL beau to a current relationship status!

Is Tomi Lahren Married? How Did Her Engagement to Brandon Fricke Dissolve?

Tomi isn’t married yet and neither is ready to settle down with a husband. But, the media personality was engaged to Brandon Fricke, an account executive at iHeartMedia. He previously worked as an assistant director of football operations for Vanguard Sports Group.

Tomi announced her engagement to her boyfriend-turned-fiance Fricke back in June 2019, showing off her glittering pear-shaped ring. She wrote in the caption,

“I love you more and those are my Final Thoughts and you are my forever. 6/29/19 #iloveyou #teamTomi #foreverandalways,”

Around the same time, the assistant director also unveiled the big news with an Instagram photo and captioned it,

“I love you more and those are my Final Thoughts and you are my forever.”

They both shared great chemistry for a couple of years. Nonetheless, it didn’t last long and the two called off their engagement in April 2020. According to Daily Mail, the Fox Nation host gave the engagement ring worth $50,000 back to her then-husband-to-be Brandon.

In November 2019, the same tabloid revealed that Brandon bought a costly ring through his Amex card and listed it in his congressional candidate financial report as a $50,000 debt. Tomi was seen wearing the ring for the last time in her Instagram photo in early Jan of 2020 with her fiance. It also marked their last photo on their social media handles.

Despite their break-up, the two remained close friends. An insider told the Daily Mail,

“It was a difficult decision for both of them but the right one. Tomi felt she wasn’t ready to settle down and made her feelings known. They still talk to each other all the time and support each other’s career. There’s no hard feelings and definitely hope to stay friends.”

Brandon Fricke first contacted His Fiancee by sending Her a DM

Back in March 2019, Fricke disclosed on his Instagram that he first contracted Lahren, sending a supporting personal message during her feud with Glenn Beck. But, Lahren never responded to his March 2017 message. After nine months, Fricke eventually ended up meeting with her. He explained,

“Here we are two years later after that DM and she is my real life #WCW. All honesty I feel like a total loser for ever sending her that DM because after really knowing Tomi it was never a question that she wasn’t going to stay true to herself, and never apologize for being right. Your strength and perseverance are an inspiration to me every day.”

Who is Tomi Lahren’s Current Boyfriend at Present?

Tomi is now dating J.P. Arencibia. Her bae is a studio analyst for Fox Sports Florida. He is a former professional baseball catcher who played for several teams like Toronto Blue Jays and Texas Rangers as well.

Although the couple has yet to reveal how they first met, they started sharing photos of each other on their respective social media handles in Feb of 2021.

On 15th Feb, the conservative commentator shared a first photo along with her new bf from a road trip. She captioned the image,

“Find yourself someone who will drive you from Miami to Nashville so you don’t miss another day of work. Check.”

A day after, Arencibia also shared a beautiful snap from their romantic road trip, further hinting at their growing relationship with the caption,

“Future is bright but damn do I enjoy every day with you.”

Arencibia was previously married to Kimberly Perry, a country music singer and the lead singer of The Band Perry. Sources reported, the two first came across in early 2012 and they engaged a year after at Perry’s parents’ house in Greenville, Tennessee in October 2013.

After their engagement, they were in a relationship for several months before they married in June 2014. Their wedding reception was held at Perry’s family’s Greenville house.

However, their marital relationship didn’t sustain for long and they went their separate ways in March 2018. Arencibia’s reported infidelity ruined their long-time marriage.

Tomi Lahren Relationship History: Dated a Navy SEAL in the Past

Back in 2015, Lahren was in a relationship with Navy SEAL boyfriend Jerad Christian, a Utah native. The former lovebirds first acquainted back in February 2015. At the time, Jerad was at the Naval Amphibious Base Coronado in San Diego.

Tomi’s ex-lover also inspired her to give a 2015 anti-Obama speech on One America News Network which went viral, making her an immediate conservative celebrity. Following her instant media attention, Lahren’s relationship with Christian also faded away.

Moreover, there were also rumors that Tomi, after her break up with Brandon also linked to Jay Cutler. The rumors of their romance first sparked when the two were spotted having dinner in Nashville in September 2020. But, they never addressed the speculations.