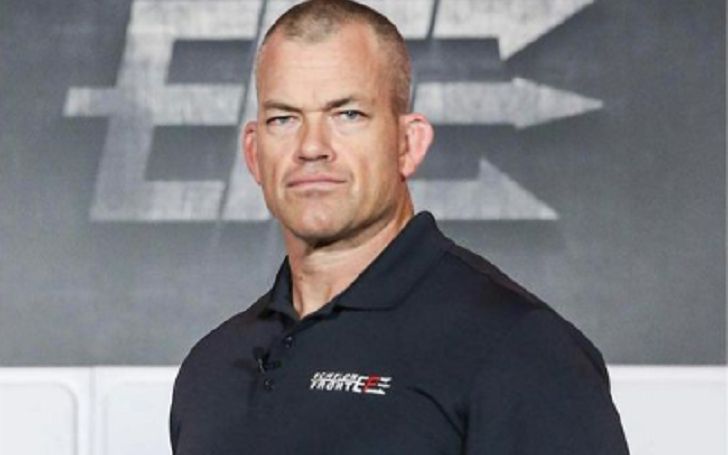 It’s been pretty unheard of, seeing marriages surpassed even a decade. But, the scenario is different in Jocko Willink‘s case. The former naval officer-turned-podcaster has been leading a delightful married life with his wife Helen Willink, a former flight attendant, for decades.

Along with their marital bliss, the longtime duo is also proud parents of four grown children. But how did their relationship blossom in the first place? We have all the details here, including the details of their first meeting so let’s get right into it.

The duo came across for the first time when Helen was a flight attendant in Bahrain. At the time, Jocko was stationed there as a United States Navy. There was an immediate connection between the then-future husband-wife and it didn’t take long before they started dating.

Now that you have an idea about how they first met, let’s talk about their low-key wedding in the next section!

How Long Have They Been Married? Jocko’s Secret Marriage to Helen

One of the long-lasting couples, they have been together for more than twenty-three years. Jocko tied the knot with Helen after dating for some time in 1997.

They walked down the aisle in a low-key wedding ceremony in the presence of their family members and close pals. They are enjoying a blissful marital relationship ever since.

In addition to their long-time togetherness, the pair are quite successful in keeping their love life to themselves. They rarely make any public appearances.

What is the Key to Their Long-Term Marriage?

They are together since the mid of 1990s and their relationship still looks stronger than ever. Looking at their envy-inducing love story, many people are curious to know the secret sauce behind their long-time marriage.

Back in October 2020, in an interview with Podcast Magazine, Willink told how they work as a team and control their emotions to make their relationship last long. He said,

“My wife and I work together as a team. We control our emotions. It’s not weak to have emotions, but there is a balance. If you lose control of them, you have moments of weakness. We don’t make good decisions when we’re emotional. If your spouse is emotional and you respond by reflecting those very emotions back, that’s going to escalate into a bad situation.”

“If my wife is mad about something and I say, ‘You need to calm down,’ that won’t work. I use a strategy of ‘reflect and diminish’: if my wife is super emotional about something, I’ll reflect some of that emotion, but I’ll diminish it—bring it down a level—deescalate it, so she can still see me as being on her team.”

Jocko Willink is the Father of Four Kids

The podcaster has four children with his life partner Helen. She gave birth to their first child, a daughter named Freja on 25th September 1999.

Born in Waterbury city in Connecticut, Freja went to Point Loma High School and graduated from the school in 2017. She then enrolled at the University of California, Berkeley, and will complete a Political Economy degree in Inequality and Development in 2021 as per her Linkedin bio.

The duo welcomed their second daughter Rana on 12th March 2001, in San Diego, California. She attended Point Loma High School. There, Rana was heavily involved in wrestling, making history as the first female wrestler from PLHS to qualify for the state meet since the 1990s. The young girl, who took training under the famed coach Brian Lamb, also won numerous major local titles.

On December 4, 2002, Jocko Willink’s wife gave birth to their third kid, a son named Thorson in San Diego. The duo became parents for the fourth time in 2009.

The family of six currently resides in San Diego.

Who is Jocko Willink’ Wife? They Run a Gym Together

His spouse Helen L Willink, born on June 20, 1970, is a retired flight attendant who quit the job shortly after their marriage to be a full-time wife and mother. Therefore, Helen can be considered as one of the major driving forces for her husband, supporting Jocko’s various business endeavors as well as a family side by side.

Besides, the lovebirds also operate one of San Diego’s best gyms, Victory MMA and Fitness. It runs group exercise classes and self-defense training for Boxing, Kickboxing, Fitness, and MMA as well.