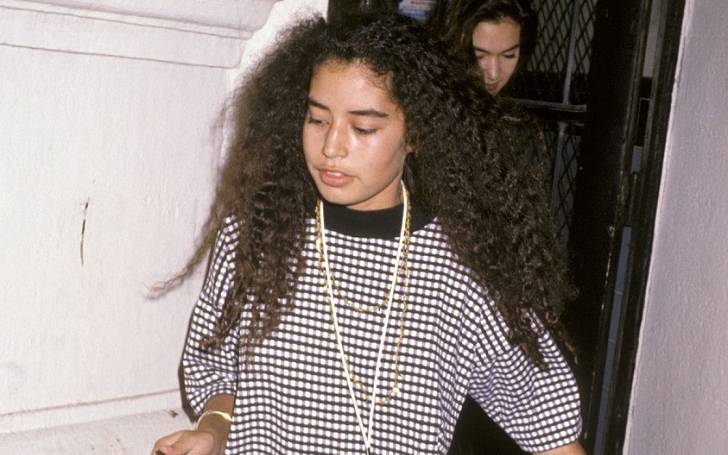 Karis Jagger is the daughter of one of the greatest artists of all time Mick Jagger. Her father gained widespread popularity as the lead singer and one of the founding members of the Rolling Stones, an English Rock band.

However, Jagger initially denied his paternity after his separation from the baby’s mama. Karis has also seven half-siblings from her father’s different relationships.

In the meantime, talking about her professional life, Karis was previously involved in acting until making her switch into a volunteering career. Also, know about her long-term marriage with her husband Jonathan M. Watson. Does the couple share any children? Let’s find out everything about her!

What does Mick Jagger Daughter Karis Jagger Do For Living?

Karis currently serves as a volunteer teacher. She was involved in the show business in the past and worked on a few on-screen projects at the time.

Besides, the star kid is a passionate philanthropist who has worked for many charitable organizations. Like Karis, her father also devotes his time to humanitarian works and supports organizations like UNHCR, American Foundation for AIDS Research, and Prince’s Trust.

Who is Karis Jagger Mother? Her Parents’ Short-Lived Relationship

Her mom is Marsh Hunt, an actress, singer, and former model. Hunt, a Philadelphia native began working in the entertainment industry after her move to London. She appeared as an extra in Michelangelo Antonioni’s movie Blow-Up in 1966.

In the meantime, Jagger also practiced as a singer for 18-month. She gained national fame after her appearance as “Dionne” in the rock musical Hair in 1968.

In the following year, Marsh started dating Mick. At the time, the actress was still married to the British musician Mike Ratledge. However, her relationship with the Rolling Stone singer also didn’t sustain for long and they broke up after around ten months of a love affair.

Marsh was pregnant with their first child at the time of their separation. Their daughter Karis is her only child.

Hunt asked for an affiliation order against Jagger in courts around London when their daughter Karis was two-year-old. However, the former flames settled out their matter outside the court resulting in the Rolling Stone frontman paying $17 a week in child support until Kasir turns 21. He also agreed to set up a trust fund for their daughter.

Subsequently, in the year 1978, Marsh Hunt filed a paternity suit against her baby’s father Mick in a Los Angeles court. In the suit, she asked for $580 a week and that Jagger publically accepts Karis as his daughter.

A year later, Hunt won the suit and said in an interview she wanted “only to be able to say to my daughter, when she’s 21, that I didn’t allow her father to neglect his responsibilities.”

But, as of now, Karis has a healthy relationship with her father.

Helped Her Father Cope With The Suicide Of Partner

Her father Mick was in a long-term relationship with a fashion designer L’Wren Scott. Unfortunately, Scott committed suicide after around thirteen-year of their relationship in 2014.

Following the tragedy, his daughter Karis helped her broken dad a lot to cope after his partner’s suicide. He later also spent most of his time in his daughter’s house in Los Angeles.

How Old is Karis Jagger?

Her age is 50 as of 2021. She was born Karis Hunt Jagger on 4th November 1970 in London, England. As for her nationality, Karis is British and belongs to a mixed ethnical background.

Jagger attended the prestigious British boarding school called Bedale. She later graduated from Yale University with a degree in modern history in 1992.

Who is Karis Jagger Husband?

Karis has been married to producer Jonathan M. Watson for a long time now. The two tied the knot in 2000, in a private wedding ceremony which was attended by her father Mick.

They are leading a happy marital relationship ever since. But, the two have kept most of their marriage details out of the media.

How many Children does the Couple have?

Karis and her husband Jonathan are blessed with two kids; a daughter Mazie and a son Zak Watson, born in 2004. Karis’s father was also with her in the hospital at the time of her son’s birth.

Back in May 2015, Jagger was seen with his daughter and grandchildren at Barneys New York in Beverly Hills, California.

Jagger’s fortune is $200,000 as of 2021. She has racked such a good fortune from her various work such as volunteer teacher and more.

On the other hand, her dad has a $360 million net worth. He has earned a huge figure from his decade-long music career.