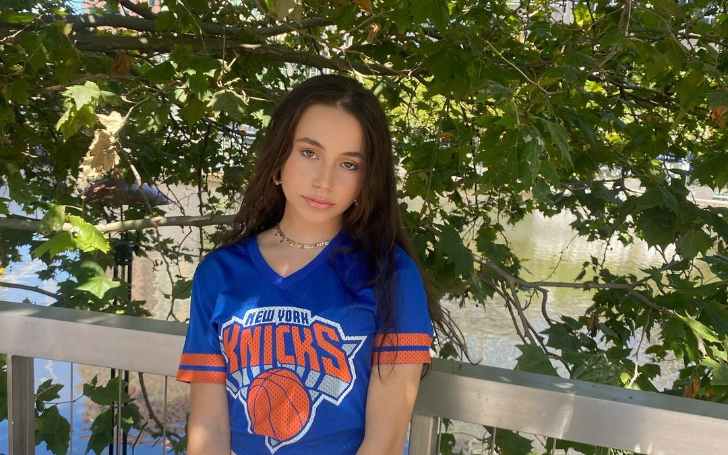 Sky Katz is an American rapper who rose to prominence after her incredible performance on American Reality Show “America Got Talent“. In this particular talent hunt show, she mesmerized the judges’ panel by singing her own rap song titled ‘Fresh’ and ‘Haters’.

Further, she is also an actor who is popular for her acting skill in the 2017 sitcom Raven’s Home and the 2022 drama series, Surviving Summer. Over the years, she has evolved as a writer and director as well. At such a young age, she has been working in various genres as a professional. Then, what about her personal life? Is she dating someone in 2022?

Here, in this article, we are going to explore every known and unknown detail about Sky Katz along with her wiki, her Instagram, her relationship, and her journey to America Got Talent.

Who are Sky Katz parents’: Her Wiki and Early Life

Sky was born ‘Skyler Jade Katz’ on December 12, 2004, in Melville, New York which makes her 18 years old as of 2022. Her father’s name is Mike Katz, a doctor by profession while her mother Fran Katz is a housewife.

Similarly, Sky is the youngest child of her parents. Katz grew up along with her three older siblings named Madison, Hailey, and Dylan. For academic excellence, she went to the West Hole Centre School in her hometown.

Besides, she belongs to white ethnic background and holds American nationality.

Sky Katz’s Professional Career: She Is A Singer And Actor

After her participation in The American talent reality show, Sky eventually got popularity as a talented singer and rapper just at the age of 11. Soon, Katz was approached by some of the major record companies which gave continuity to her singing career.

As a result, she recorded her first original song titled ‘Haters’ which came out in October 2016 and instantly gained a million views. Likewise, she started getting invitations to several events like the ‘New York Knicks’ game, the ‘Winter Film Awards, ‘rookie USA Fashion Show’, and many more.

Aside from all that, she has sung numerous cover songs which she keeps uploading on her Youtube channel.

Her first cover song was Nicki Minaj’s song Monster which gained more than half a million views and got a good response. Similarly, as a cover artist, she has also sung songs by different artists like Lil Mama and Rakim, Saweetie, Nicki, and others.

Accordingly, Sky performed in different venues like ‘the Healthy Guru Expo, Camp Chipinaw, Constitution Park in New York, and others.

Sky started Singing at the age of 5: What made her inclined to sing?

Her inclination toward music especially in the Rap genre came from her parents. Actually, both of her parents were huge admirers of Rap music and used to listen to the rappers of the 1990s. Katz grew up listening to her parents’ favorite rappers which may have contributed to dragging her toward music.

Eventually, at the age of 5, she started singing and completely drifted into the music field and this is why Sky decided to be a part of American Got Talent and gave audition without her parents knowing it.

Sky Katz Journey On America Got Talent: How Far Did She make on AGT?

Katz established her identity as a capable singer through the American talent show ‘America Got Talent.’ She participated in the 11th season of AGT in the year 2016. She was successful in impressing the judges with her first performance of the song ‘Fresh’, written by herself.

As a result, judges even called her the ‘coolest 11-year-old in the world. Her back-to-back incredible performance took her to the Judge-cut round, the eighth episode of the season. In this round, she sang the song ‘Party Ain’t a Party’ but sadly this time she couldn’t make it to the next level and her journey on AGT ends with the eighth episode, the Judge-cut round.

Sky Is an Actor As Well: Her Movies And Tv Shows

She has been rising as a promising young star in the American Entertainment Industry following her participation in AGT. Along with her singing career, she also showed her prowess as an actress.

She made her debut in acting through the 2017 Disney Channel sitcom Raven’s Home where she portrayed the role of ‘Tess’, a street-smart teenager. Further, the beautiful rapper and actor also appeared as Summer Torres, a rebellious teen, in the Australian teen drama TV series, Surviving Summer which premiered on Netflix on June 3, 2022.

Lately, she has been busy filming music videos, recording songs, and acting. But apart from that, Katz is a basketball player. During her school years, she was quite into basketball and has already played for three different teams.

Moreover, she has been serving as a philanthropist after becoming the national ambassador for Sunrise Association.

Sky Katz’s Personal Life: Is she Dating anyone?

Moving on to her relationship status, she is rumored to be in a romantic affair with her Raven’s Home co-star and vocalist, Issac Ryan Brown. However, Katz has not officially spoken about her relationship with Issac.

Meanwhile, some sources allege Sky is dating actress Savannah La Rain which is also creating many queries regarding her sexual orientation. On her Instagram, Katz has shared a handful of her photos with Savannah. In one post of them together, she has captioned,

“i could write a book about how much i love you. happy birthday sav ∞ i miss you insane amounts, my angel.”

From this alone, people are assuming her to be lesbian and dating the actress but no confirmation is there till today either on her rumor affair with Issac Ryan Brown or with Savannah.

Is Sky Katz Active On Instagram? Her Other Social Networking Sites

A New York-born rapper is much active on Instagram under the username @skykatz with 1.4 million followers and 79 posts in total. Further, Katz is also on Twitter with 33.5k followers. On her Twitter account, she has tweeted 4,436 tweets till today.

In 2022, she is occupied with her various projects in music and acting. Two months back, her Netflix series Surviving summer got premiered.

Recently, she has been working as a writer and director on her upcoming short film named ” Why Did You Call? This short movie starer Sky herself and Savannah La Rain, is going to premiere on August 8, 2022.

Following her audition in AGT back in 2016, Sky has been continuously working on different projects as a writer, singer, and actor. So, it is safe to say that she has been earning a lot of amount from her professional career.