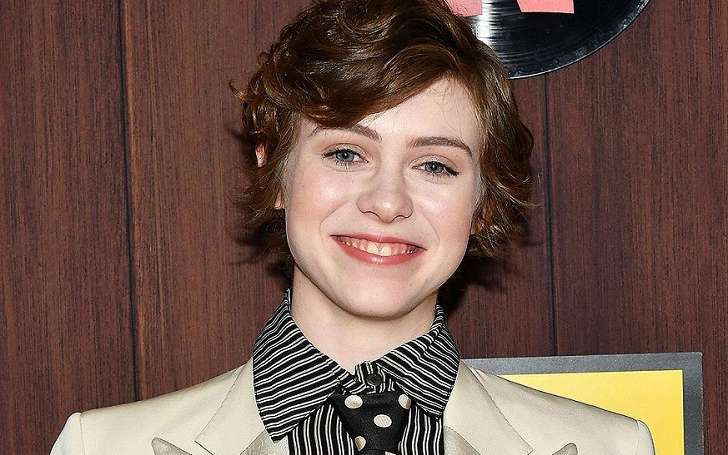 Sophia Lillis, 19, became the sensation of Hollywood after playing heartbreaking depressive roles. The young performer played Beverly Marsh in the horror film It (2017) that built a solid foundation for her career. It also paved the way for many other successful roles.

Behind the scene, Sophia lives a rather simple life with her parents and brothers. She has one fraternal twin and one stepbrother.

Today, we’ve come with all the details about her professional and personal life. Take a look!

Sophia was born on February 13, 2002, in Crown Heights, New York. She is the daughter of Juliana Lillis (mother) and David Lillis (father).

Her parents, however, divorced when Lillis was a child. The reason behind their split was irreconcilable differences.

Raised By Her biological mother and stepdad

After Sophia’s parents parted ways, her mother Juliana went on to marry Christopher Mellevold who later became Sophia’s stepfather. Her stepdaddy is a photographer and filmmaker by profession.

Besides, Christopher is also a great step-father. Both of his step-children are on great terms with him. In fact, they even see him as their biological father and why wouldn’t they? After all, he has been taking care of them since their childhood.

The Nancy Drew star herself admitted the fact that her stepfather, who influenced her to embark on show-business. She also performed in one of his projects at the age of seven.

She said, “When I was seven I started to get really into it [acting] because my stepfather was working on this film for a film class and he forced me to be in it but I enjoyed it.”

Sophia Lillis has a Fraternal Twin Brother; He has a Disability

The actress has a twin brother Jake Lillis who is just a minute older than her.

Talking about her sibling, she maintained,

“He is older after all by one minute or so. He’s always been really smart and has an amazing memory and organised mind.”

The twin siblings also share the same love for acting. Her brother is better known for his performance in the short movie, Tiny Mammals in 2017.

Her twin brother Jake has a disability wherein his fingers look fused together. This in turn leads to difficulty in doing regular things in life. The name of his disability is not known exactly.

My step-brother Philip is trying to get his new drink, ” The Beverly Marsh” on to the cocktail menu at #macaotradingco

The actress studied acting at Lee Strasberg Theatre and Film Institute, in New York. The actress went to a high school in New York City.

Lillis also told the New York Post she likes NYC because her school pals don’t care about her Hollywood status.

Is outdoorsy and loves Cat

Lillis is a massive outdoor fan who also has a soft spot for animals. She is the mother of her cat who is named Crackle.

Is also a Dog Lover

Sophia is a proud owner of an adorable bulldog pooch Gracie. She frequently shares beautiful photos of both of her pets on her respective social media accounts.

She is an Environmental Activist

The actress was also included in the 25 Under 25 list made by RollingStone too for her contribution to the climate and other social causes.

Famous for Playing Beverly Marsh in ‘It’

Sophia rose to stardom after her marvelous performance in the supernatural horror film It (2017). She appeared in the projects along with many other young talents like Wyatt Olef and Jack Dylan Grazer.

The movie grossed a tremendous box office collection of $701.8 million against the $35 million budget.

Sophia has also worked on several other hit projects. In 2018, the actress portrayed Young Camille Preaker in the TV series, Sharp Objects.

A year after, Lillis appeared in two TV projects Nancy Drew and the Hidden Staircase and It Chapter Two. Her biggest break came when she took the role of Sydney Novak in the Netflix drama series I Am Not Okay with This (2020).

The same year, Sophia appeared in the movies Uncle Frank and Gretel & Hansel.

Prior to her roles in movies and TV shows, Sophia also appeared in two popular music videos. In 2017, she featured Sia‘s music video ‘Santa’s Coming For Us’ with actor Wyatt Olef.

Sophia Lillis is a very close friend of Wyatt Olef, 16. The two have already worked on numerous small and big projects together.

Struggled With Beauty In Hollywood

Sophia initially struggled a lot to meet the stereotypically feminine looks set by Hollywood. She also revealed that her short hair became the biggest obstacle in her Hollywood journey.

Is an Art Lover

Sophia enjoys art and loves drawing. Lillis also said she would’ve embarked towards arts if she wasn’t acting. She stated,

Sophia is a great photographer as well.

Who is Sophia Lillis Dating? Details on Her Boyfriend

Lillis is not dating anyone officially at present. She has kept all the details about her love life entirely away from the spotlight. Because of her tendency to keep things private, it becomes hard to find out whether Sophia does have a boyfriend or not.

So far, the actress has not been linked with anyone. Lillis seems more focused on her acting career.

What is Sophia Lillis Net Worth?

Other Interesting Facts of Sophia Lillis