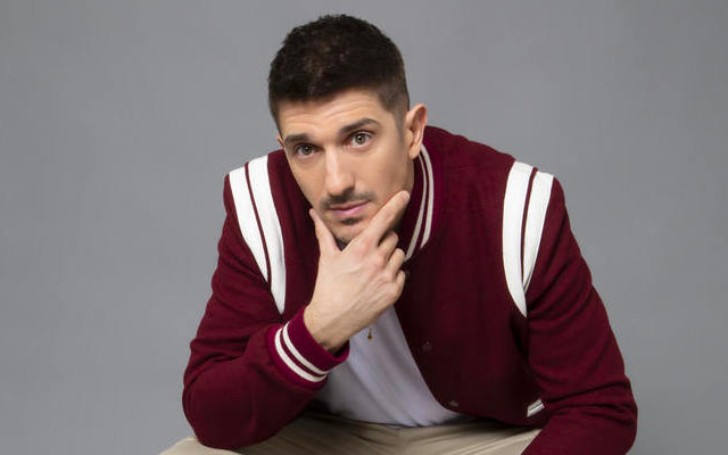 Many times when a person becomes famous, be it through good or bad means, people start getting curious about their personal life. Similarly, ever since hitting the comedy scene, Andrew Schulz‘s fans have been eager to know about his partner.

To begin with, he is in a relationship and engaged to be married. Now the big question here is, who is Andrew Schulz’s girlfriend? Since when are they dating? What is her identity?

Today in this article, we’ve all the answers you have been looking for!

Andrew Schulz is happily engaged to girlfriend: When is the marriage?

The year 2020 was terrible for the majority of us. However, there were a few for whom it was the best time of their life, one of them being Andrew Schulz. The New York native finally got engaged to his girlfriend.

He proposed to his partner right in the middle of the pandemic in October of 2020. He officially announced the big news to his fans through his Instagram account on October 22, 2020. Andrew and his lover are seen holding hands in the picture as the sparkling diamond ring took all the attention. It was like, ‘all eyes on me.’

His fans were quite delighted to hear about the news and were quick to congratulate him. Moreover, many were curious to know if the wedding bells are sooner than we think? The comedian has not said anything in this matter so far, and it looks like it’ll be a surprise announcement just like he did with the engagement.

Knowing Andrew, who loves to keep his personal life aside from his professional life, the wedding announcement might randomly come as his engagement. Let’s hope this time around he does tell us before tying the knot.

Andrew somehow messed up the proposal

Now talking about how it went down, well, Andrew somehow messed it up, which surprisingly turned out much better.

During his appearance in the Flagrant 2 podcast, he revealed that he’d written proposal lines and memorized them to the dot. Still, he was quite nervous, thinking that he was for sure gonna mess up. And he did mess up but in a very cute way. As he got on his knee, he panicked and mixed up a few syllables. What should have been, ‘Will you spend the rest of your life with me,’ turned into “Will you spend the lest of your rife with me.”

Fortunately, everything went according to the plan, and they got engaged at Andrew’s favorite restaurant. Funny story, the same resto where Andrew proposed, one of his long-term friends and his girlfriend were sitting behind them, who didn’t know Schulz was gonna propose.

As a matter of fact, Andrew’s friend was in a relationship with his girlfriend for a long time, but he had not popped the question yet. On the other hand, Andrew was dating his GF for a little over three years, and they were on the verge of engagement. Fearing his friend might feel the wrath from his girlfriend since they were not engaged despite dating for so long, Andrew waited for them to leave the place before popping the question.

Who is Andrew Schulz girlfriend?

Despite the fact that we know of his engagement, there’s one more thing we’re all curious about, and that is, who in the world is his girlfriend? This question has been asked a lot, and we’re going to give an accurate answer here today.

First thing first, her name is Emma Kathryn Turner. You must be asking how come we know her name? Well, at first, a Reddit user claimed to have found her through internet stalking. The post is now deleted, but we were able to find out that it is definitely Emma because she commented “monkey for life” on Andrew’s engagement announcement post.

Besides, Emma is also active on Instagram, but she has kept her profile hidden. She goes by the username @emma.k.turner. As for what she does for a living, well, she is a BASI certified Pilates instructor. She works alongside her mom, Kristin, who runs a Pilates Studio.

In his podcasts, Andrew mentioned quite a few times that his wife is a pilates freak. He usually jokes about how insanely strong she is.

Andrew’s plans on having a children

As a comedian, he usually talks on a wide variety of topics, including his willingness to become a father. In 2018, he posted a picture with a child in which he wrote, “Yeah, I need one. Who tryna get pregnant??? Serious inquiries only.” Yeah, we know he jestingly added the caption, but one doesn’t joke around stuff like this unless they’ve been thinking about it inside their head.

After the engagement, he is just one step further from the aisle, so becoming a father isn’t very far-fetched.

Andrew Schulz had a handful of relationships in the past

Before dating Emma, he was in two very public relationships. Around the 2010s, he was dating singer Sara Phillips. The pair was in a relationship for a couple of years and had even made a handful of public appearances.

Their relationship ended a few years later. According to Schulz, they broke-up after they started growing apart. However, according to Sara, she called it quits because of Schultz’s abuse. When Andrew’s Netflix special Schulz Saves America came out, Sara also came out with all sorts of accusations against her ex-boyfriend. This is why many people claimed Sara is clout hunting and nothing else.

Apart from Sara, Schulz also dated comedian Jamie Lee. Not much is known about their relationship. They dated for a short while before calling it quits in 2014. Regardless of their differences, the former flames are still amicable. In fact, a few months after their split, they even did a comedy tour together.