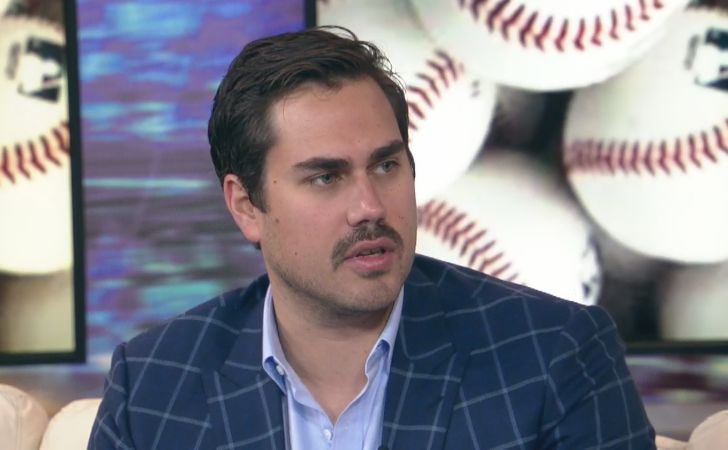 Dan Katz is an American blogger, writer, and podcast host. He is most famous among the sports community as Big Cat. Initially, he started out as a freelance writer for Barstool Sports and soon became a big name in the community.

The multi-talented personality keeps his personal life close to his chest. Thus fans are always eager to know all the intricate details about his life including, his wife, kids, where he grew up, college, and more.

Well, let’s find out all the answers to your queries here today!

Dan was brought up by his parents in the state of Wisconsin. Growing up, some of his family members lived in Chicago so he used to go back and forth from Wisconsin to Chicago.

Upon finishing studying at Newton High School, Massachusetts, Dan enrolled at the University of Wisconsin-Madison. He graduated from college in 2007 with a bachelor’s degree.

Since his childhood, Dan was quite into sports. Although he was born and bred in Wisconsin, he still supports the sports team from Chicago. It was due to his interest in sports that Dan started his own blog.

Talking about his parents, there is not much information about them. Though Dan is quite outspoken regarding many topics, he rarely speaks anything about his family. So far, there has been no mention of his mother and father, except a few times on Twitter.

In May of 2018, he asked his fans to request their mothers to score for the English football club, Swansea City via his Twitter account. In addition, he once posted a photo on Twitter with a guy, whom he claimed was his dad.

Also big time thanks to my dad @49ersPR. Crazy how far our relationship has come. Love you pops pic.twitter.com/HcldWHwv1k

However, as it turns out, the man isn’t his father but he is the Vice President of Communication of San Francisco 49ers. He goes by the name, Bob Lange.

Similar to his parents, Dan has kept mum when it comes to siblings as well.

Besides, in December 2013, Dan’s uncle Jerry Paul Katz passed away.

For around a decade, Dan has been a regular name in the Barstool community. Going by the nickname the Big Cat, at first, he used to be a regular caller in the show, Barstool Power which first aired in 2009. After a few years, Barstool Sports opened up a vacancy in Chicago and Dan immediately applied.

After taking a look at his profile and a blog he used to run back then, Dave Portnoy, the founder of Barstool, decided to hire him. Subsequently, Dan and Dave met and Portnoy asked him if he’d like to join the team for which he said, “Yup, dream job, in in in.”

However, just like in a marriage, Dan developed cold feet and abruptly decided to call it off. According to Portnoy, Dan didn’t see Barstool as a safe move for him.

Later down the line, Dan approached Barstool once again and asked if he can contribute to Barstool Chicago. Without hesitation, Dave accepted him and he started writing as a freelancer. He officially joined Barstool Chicago in 2012.

Dan Katz is the co-host of Pardon My Take

In 2016, the podcast was named one of the best podcasts of the year by Apple. Furthermore, PMT became the 14th most downloaded podcast of the year in 2018.

This year, however, their podcast had to be improvised as no sports events were going on due to the pandemic. Dan and PFT came up with a new segment, that is reacting or reviewing popular TV shows, from different networks.

Besides, Dan’s mom and dad have a different take when it comes to the podcast. While his father is all over it, Mrs. Katz isn’t really fond of it. In an interview with GQ, he said, “My mom, we don’t talk about it as much. I don’t think Barstool and Pardon My Take is geared towards [her]. My dad has been very supportive. He listens to every Pardon My Take.”

It is reported that Dan’s net worth stands at a massive $1 million. Although the number sounds a little bit over the top, some rumors definitely justify his fortune. There are speculations that Dan owns a few shares in Barstool Sports which helps him earn a lot of money.

Dan Katz Relationship Status: Shares one son with his partner

Dan is in a happy relationship with his partner for several years now. Like we said before, he rarely talks about his personal life, so not much is known about his partner. In fact, he is yet to reveal even her name.

Even so, fans call her the ‘Lady Cat.’

Besides, the Big Cat and Lady Cat welcomed their first child, a boy on 19th June 2019. He shared a photo of his baby boy after his birth on Twitter.

The little boy has recently turned one. In addition to a kid, Dan and his partner have a pet dog as well.

Regardless of his activeness in the social media platform, Katz never really share any picture of his family. It’s strictly business for him.